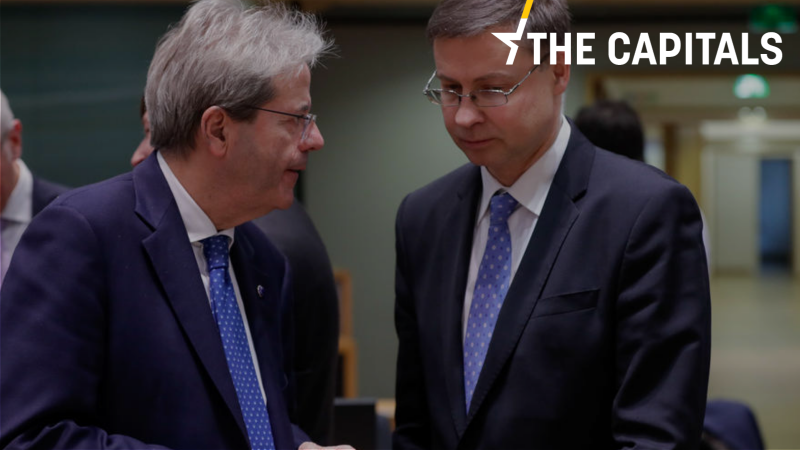 “The more successful we are in the implementation of this facility the more scope there will be for discussions on having a permanent instrument, probably of a similar nature,” Commission Vice President Valdis Dombrovskis said. [EPA-EFE/STEPHANIE LECOCQ]

Before you start reading today’s edition of the Capitals, feel free to have a look at the interview   with EU Health Commissioner Stella Kyriakides: AstraZeneca remains an important part of the EU portfolio.

EU Commissioners may have placed the bloc’s €750 billion recovery fund on shaky ground after telling MEPs the arrangement could become a regular and even permanent mechanism to boost growth. Fiscally conservative Finland has previously presented the fund, which requires unanimous approval from all 27 EU countries, as a temporary measure with no joint borrowing. Read more.

EU confident of COVID-19 travel certificate for summer. The European Commission expects to finish work soon on a COVID-19 certificate that could allow citizens to travel more easily this summer in the 27-nation bloc, the EU executive said on Tuesday (11 May) after a meeting with European affairs ministers. Full story

Belgium presents ‘summer plan’ for return to ‘normal life’. Belgium’s government on Tuesday presented plans for a major easing of its restrictions, starting on 9 June, with the reopening of cinemas, theatres, gyms and indoor cafes and restaurants. Read more.

Meanwhile, the ministers for culture and work have promised to extend unemployment compensation for part-time business workers who have been left jobless due to the pandemic. The support measure was due to expire by the end of August but has been extended until 31 December. (Magdalena Pistorius | EURACTIV.fr)

NI Protocol is ‘unsustainable’, says EU minister. The Northern Ireland protocol is “unsustainable” and will need to be revised, Britain’s EU relations minister, David Frost, argued on Tuesday following a visit to the region. Read more.

Fianna Fáil Senator: United Ireland referendum can’t be held before peace walls come down. Fianna Fáil senator Robin Gallagher has called for the dismantlement of the so-called “peace walls” built across Northern Ireland and mainly in Belfast in the 1970s to prevent violence between Unionists and Republicans who live in close proximity to each other.

“Now we move onto the next phase when we can get to a point when there is no longer a need for the peace walls dividing the two communities. Perhaps then the time will be right to have a conversation about our future together on this island,” he added, the Irish Times reported.

“There are more peace walls separating the two communities in Northern Ireland than there were when the agreement was signed in 1998,” Gallagher added. Today about 100 such barriers remain in Belfast alone. (Paula Kenny | EURACTIV.com)

Italian ministers ask EU for help in managing migrant influx. Italian Interior Minister Luciana Lamorgese has called for EU help with tackling migration flows, saying that it is necessary “to carry out structural interventions in the management system of the phenomenon within the European Union.” Read more.

Italian and Turkish fishing boats in skirmish off Cyprus. A skirmish broke out between Turkish and Italian fishermen near the divided Mediterranean island of Cyprus on Tuesday, the Italian navy said on Tuesday (11 May). More.

Spanish government divided over new post-lockdown concerns. Spanish politics has been thrown into turmoil following the expiration of the pandemic-era state of alarm at the start of this week which formed the legal basis for the country’s coronavirus restrictions, with health authorities warning regions no longer have the means to tackle infections. Read more.

Slovakia suspends use of AstraZeneca following death. Slovakia has temporarily stopped the administration of the AstraZeneca vaccine after a 47-year-old woman who had been vaccinated with the AstraZeneca jab died from cerebral venous sinus thrombosis. Read more.

Parliament speaker presents ‘Croatia’s Vision’ for EU future conference. Croatia’s parliamentary speaker Gordan Jandroković hosted the “Conference on the Future of Europe – Croatia’s Vision” in parliament on Tuesday, with the aim of informing and including citizens in a number of projects that have been started in the country. Read more.