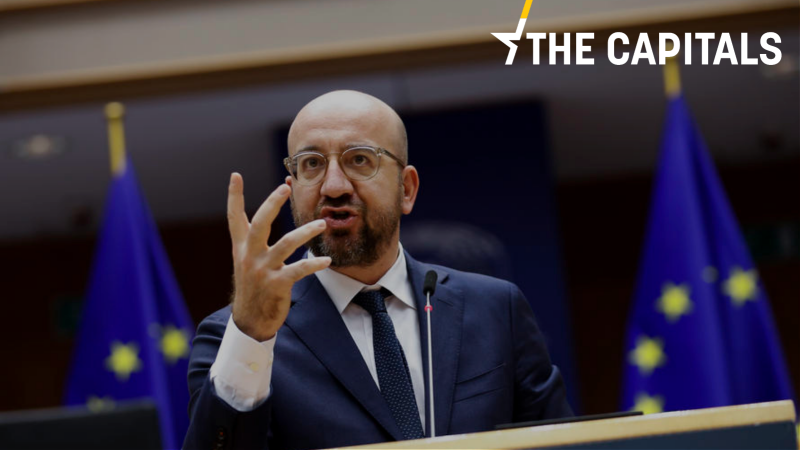 Meanwhile in Paris, the Haute Autorite de Sante (HAS), France’s top health advisory body, has said a solution to the vaccine deliveries’ delay could be to double the time between the first and second doses. [EPA/FRANCISCO SECO]

NOTE: EURACTIV’s network is publishing later today a Special Edition of The Capitals regarding Europe’s hospitality sector, the main challenges to re-open and the role of digitisation to create a COVID-19 safe environment.

Before you start reading today’s edition of the Capitals, feel free to have a look at the article “US leading race in artificial intelligence, China rising, EU lagging: survey“.

The EU is leaving the door open for possible legal action against the pharmaceutical companies that have unexpectedly delayed the delivery of COVID-19 vaccines, European Council chief Charles Michel has said.

“We can use all the legal means at our disposal for this,” Michel told Europe 1. “The EU intends to enforce the contracts signed by the pharmaceutical industry,” he added.

Many leaders across the bloc have reacted strongly to the delays, while Paris is trying to come up with alternatives until vaccines’ production returns to normality. Read more.

Thuringian leader in hot water after Candy Crush jokes. Thuringian premier Bodo Ramelow (Die Linke) got himself in hot water over the weekend after cracking jokes in a conversation on new social media website Clubhouse, saying he had played the game Candy Crush during state leaders’ coronavirus meetings with German Chancellor Angela Merkel, whom he referred as “little Merkel” (Merkelchen in German). Read more.

Government should be vaccinated sooner, says doctors’ association head. After risk groups will have received the COVID-vaccine, the next in line should be leading politicians, said the president of Austria’s doctors’ association, Thomas Szekeres. According to him, this would include federal government ministers, the president, and the executive branch of every state – who would act as models. This comes after some Austrian mayors have recently used their influence to receive the jab before they were supposed to. (Philipp Grüll | EURACTIV.de)

Danish PM has vision of asylum-seeker-free future. The government’s vision for Denmark is one where asylum applications are not given to people seeking asylum due to the country’s social cohesion already being under threat, Prime Minister Mette Frederiksen said on Friday when answering a question from the populist Danish People’s Party in parliament. Read more.

Unsuitable syringes waste sixth dose from COVID-19 vaccine. Spanish regions such as Andalusia, Catalonia and Madrid are wasting thousands of doses of the Pfizer-BioNTech COVID-19 vaccine by not injecting patients with the sixth dose contained in the vials. The reason is the lack of precision syringes to do so, El Pais reported.

Italian DPA imposes TickTock ban for users unverifiable by age. The Italian Data Protection Authority imposed on Friday the immediate temporary block until 15 February on access to data for TickTock users whose age could not be verified, following the death of a 10-year-old girl from Palermo, who suffocated after participating in a ‘choking challenge’ on the social media platform. Read more.

Poland’s retirees to increase if retirement age is not raised – study. While the number of Poland’s retirees and pensioners continues to rapidly increase, the country could face an increase in the number of retirees by almost 40% and a 35% decrease of the working population within 30 years if not for an increase of the retirement age, according to a report by the Retirement Institute (Instytut Emerytalny) – EURACTIV Poland’s media partner Gazeta Wyborcza reports. Read more.

No one responsible for Hungary’s vaccination plan. After submitting a freedom of information request to the prime minister’s office, the human resources ministry, the interior ministry and the foreign ministry, none had taken responsibility for the national vaccination plan as the data controller, socialist MEP István Ujhelyi – who started making requests on 18 November – told a press conference on Saturday, 444.hu reported. Read more.

MEPs ask Bulgarian authorities about golden visas and rule of law. “Have you considered the termination of the golden visas?” was one of the follow-up questions to the exchange of views between MEPs from the Democracy, Rule of Law and Fundamental Rights Monitoring Group (DRFMG) and Bulgarian authorities held at the beginning of January. Read more.

Romania eases restrictions unexpectedly. After Romania’s health ministry warned against easing restrictions following an outbreak of the UK COVID-19 strain in Bucharest school Friday, the Bucharest committee for emergency situations decided to lift some restrictions, so that theatres, cinemas, restaurants, bars and casinos in Romania’s capital are allowed to open as of Monday. Read more.

Croatian president cancels attendance at a commemoration of Operation Maslenica.  President Zoran Milanović on Friday cancelled his attendance at an event commemorating the 28th anniversary of wartime military and police operation “Maslenica 93” in Zadar after he learned that two persons wearing clothes with Ustasha symbols were participating in the event. Read more.

UK COVID-strain now in Slovenia, says PM Janša. Due to the possibility that the UK COVID-strain is present in Slovenia in larger numbers, the government will look into revising next week its decisions to relax anti-coronavirus restrictions, Slovenian Prime Minister Janez Janša said on Sunday. Read more.

New strain of coronavirus reaches Serbia. A new variant of COVID-19 has arrived in Serbia, President Aleksandar Vučić told Prva TV in an interview in reference to the report of Health Minister Zlatibor Lončar, who confirmed the carrier was a female passenger from London, who presented a negative PCR test upon entering the country. Read more.

Riot erupts in BiH refugee camp. Seventeen illegal migrants were arrested in the area of Sarajevo on Friday and they will all be banished from BiH due to their involvement in riots and instigation of violence earlier this week.

Apart from the 17 suspects, police also found “discarded items suitable for inflicting bodily harm (wooden bars, metal bars, screwdrivers, scissors, scalpels, kitchen knives, etc.), which are linked to the recent attack on police officers in a migrant reception centre in Blažuj,” the interior ministry of the Sarajevo Canton has said. According to migrants’ accounts and data collected by police among the migrants in Blažuj, the riots erupted over disputes between Sunni and Shia Muslims, according to HINA. (Željko Trkanjec | EURACTIV.hr)

Đukanović elected DPS president. Montenegrin President Milo Đukanović has been elected leader of the Democratic Party of Socialists (DPS), the biggest opposition party which lost the first elections in 30 years in August last year. “We organised the Congress with all extraordinary circumstances in mind. I’m satisfied with the work of the party so far. It’s an opportunity to remind ourselves of the DPS’ results and seriously discuss the weaknesses and mistakes that brought us to this place, i.e. that we are the opposition now,” said Đukanović after the Congress.

This is a sign DPS will stay the same as before and Đukanović’s adversaries did not succeed in removing him. (Željko Trkanjec | EURACTIV.hr)

Launch of Investigations into Italian mafia connections?  Albania’s special Anti-corruption and Organised Crime Prosecution (SPAK) is considering whether there are grounds to launch an investigation regarding media allegations on the Italian mafia’s attempts to launder money in Albania, exit.al reported. Albanian company GTSH.SHPK – which won 80 public tenders in the health sector – was mentioned in the Italian prosecution’s investigation regarding the ‘Ndrangheta’ mafia group, Albania Daily News reported. The publication of parts of the investigation showed the mafia’s attempts to launder money in Albania. (Željko Trkanjec | EURACTIV.hr)

Vetëvendosje could be a big election winner. In a series of tweets on Friday, French Embassy in Pristina echoed the EU’s position on the certification of candidates, saying that ongoing procedures on certification of the candidates are defined by law. Kosovo’s Central Elections Commission (CEC) has not certified the election lists of Vetëvendosje (Self-Determination), Alliance for the Future of Kosovo (AAK), and Nisma for the early general elections set for 14 February. The reason was their refusal to remove candidates who according to the judicial council are banned from running as they were found guilty of a criminal charge in the last three years.