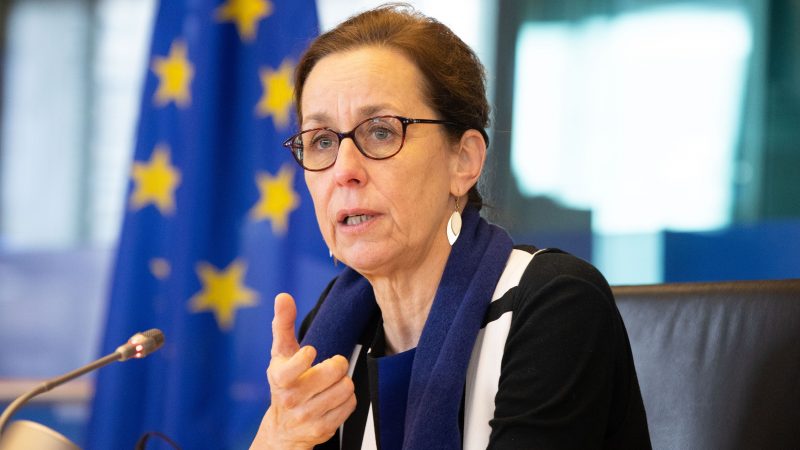 "It is out of the question that the European budget and recovery plan finance the repression of freedoms or the re-election of conservative autocrats in Hungary or Poland," said French MEP Fabienne Keller. [European Parliament Multimedia Centre]

The EU Parliament on Thursday (10 June) threatened the European Commission with a lawsuit for failing to use the bloc’s new rule of law powers to hold back recovery cash from Poland and Hungary.

The rule-of-law mechanism was painfully included in the €750 billion pandemic recovery package approved a year ago as a way to use EU spending to rein in breaches of the bloc’s democratic norms in both countries.

EU parliament called on the Commission to “fulfil its obligations” within two weeks or risk a lawsuit at EU court.

MEPs backing the resolution fear that the largesse of the EU’s landmark plan will benefit the campaigns of the ruling eurosceptic nationalists in upcoming elections in Hungary and Poland.

“It is out of the question that the European budget and recovery plan finance the repression of freedoms or the re-election of conservative autocrats in Hungary or Poland,” said French MEP Fabienne Keller (Renew Europe).

In the resolution overwhelmingly adopted on Thursday, MEPs said the Brussels-based executive should have proposed guidelines for the scheme by June and that the commission was falling short of using its full powers.

Polish MEP Ryszard Legutko, of the governing Law and Justice (PiS) party, criticised the resolution as “a method of dictation and control against governments that break away from the (pro-EU) federalist mainstream”.

The Parliament wants the Commission to react more quickly to possible violations of the rule of law in member states and to cut EU funds in cases of non-compliance.

The risks of misappropriation of EU funds are “increasing” and risk sapping payouts from the European recovery plan all while the state of the rule of law “is deteriorating”, a statement said.

Including rule-of-law considerations in the recovery plan was at the insistence of the Netherlands and nordic countries and still faces the bitter resistance of Warsaw and Budapest.

To placate their opposition, member states had agreed that it would not be implemented until the EU’s highest court ruled on its validity.

Poland and Hungary swiftly seized the European Court of Justice to have the mechanism annulled, a process that could take almost a year.