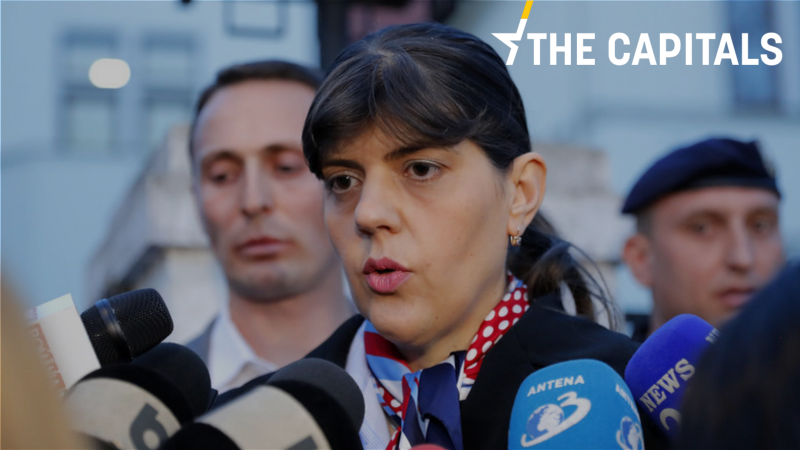 Before you start reading today’s edition of the Capitals, feel free to have a look at the article ‘Athens and Cairo mull changing the route of EastMed pipeline’.

The European Public Prosecutor’s Office (EPPO) is about to reject seven out of 10 of Bulgaria’s candidates for the European Delegated Prosecutor, a source from the EPPO told EURACTIV Bulgaria. The EPPO, led by Laura Kovesi, has notified the Bulgarian justice ministry that they have remarks about seven of the candidates the Bulgarian authorities proposed on 18 February. Read more.

Portugal considers including unapproved vaccines on EU vaccination certificates. Portugal’s secretary of state for European affairs has acknowledged that vaccines not certified by the European Medicines Authority but are already circulating in Europe might be included in the EU digital vaccination certificate due to be presented soon by the Commission. Read more.

Portugal seeking ‘clarification’ on environmental standards before EU-Mercosur trade deal. The Portuguese Foreign Minister has said that the Portuguese presidency of the Council of the European Union is working with Mercosur countries on “additional clarification” on environmental standards in the trade agreement negotiated with the EU. Read more.

Eurovision to go ahead with own health protocol. The European Broadcasting Union (EBU), the organiser of the Eurovision Song Contest, presented the first COVID-19 health protocol, which contains the measures according to which the festival in Rotterdam can take place in May. Read more.

“This association and some of its activists must be regarded as engaging in hate speech inciting discrimination or violence against individuals on the basis of their origin, race, and religion,” reads the decree of dissolution posted on Darmanin’s Twitter. The association, based in Lyon and claiming nearly 2,800 members, has already announced that it will file an appeal before the Council of State, France’s highest legal entity. (Mathieu Pollet | EURACTIV.fr)

More Belgians to be vaccinated next week, but deliveries remain problem. More than 32,000 extra people, mainly over 85-year-olds who do not live in a residential care centre, will get vaccinated next week, Flemish Welfare Minister Wouter Beke confirmed on Wednesday, after the AstraZeneca vaccine has been cleared for use in people over the age of 55. Read more.

Tyrolean district to be completely vaccinated. The state of Tyrol has been a hotspot for COVID-infections since the start of the pandemic. One district, Schwaz, is particularly hit by the South African mutation, B.1.351.

The European Commission, therefore, decided to stomp out the virus there entirely and launched an initiative to vaccinate everyone in the district. An additional 100.000 vaccine doses have been provided as a preliminary delivery to that end. Vaccinations are set to start in the second half of March. (Philipp Grüll, EURACTIV.de)

“For supermarkets and their suppliers, as part of the operational plan the UK committed to at the UK-EU Joint Committee on 24 February, the current Scheme for Temporary Agri-food Movements to Northern Ireland will continue until 1 October,” Boris Johnson’s government stated on Wednesday. Read the full story.

Finnish oil company likely to make €1.5 billion refinery investment in Rotterdam. The majority state-owned oil company Neste is considering building its next refinery in the Netherlands, with an investment thought to be worth about €1.5 billion, taking Finnish town Porvoo out of the running, according to the newspaper Kauppalehti. Read more.

Draghi tells Commission chief to ‘accelerate on vaccines’. The EU must speed up the procurement and distribution of COVID-19 vaccines, Italian Prime Minister Mario Draghi told European Commissioner President Ursula von der Leyen in a phone call on Wednesday, reiterating what he had told the European Council last week. The two also spoke about the recovery fund and the need for “greater proportionality between the responsibility and solidarity of member states” in the EU management of migratory flows, according to a note released by the PM’s office.

In other news, far-right Northern League leader Matteo Salvini asked the Italian government to consider buying the Russian Sputnik V vaccine, although it has not yet been approved by the European Medicines Agency (EMA), after he met with San Marino Labour Minister Teodoro Lonfernini, whose country has been administering the Russian vaccine to citizens in recent days. (Daniele Lettig | EURACTIV.it)

Most Spanish regions intend to maintain lockdowns over Easter. In one last effort to win the race against the COVID-19 pandemic, almost all Spanish regions – with a few exceptions – have expressed their will to keep in place the bulk of the restrictions adopted to reduce mobility between the provinces during Easter and prevent the virus from spreading. Read the full story.

Only one-quarter of Portuguese hotels booked for summer. Only one in four hotels in Portugal said they have reservations for this year’s summer, according to a survey supported by the Hotel Industry Association of Portugal (AHP) released on Wednesday. Read more.

Czechia orders Chinese vaccine Sinopharm. After Czechia asked Chinese authorities for the delivery of Chinese Sinopharm vaccines, “according to information provided by the Czech embassy in Beijing, the Chinese side decided to immediately comply with the request,” the Czech president’s spokesperson said on Wednesday. Read more.

Polish government reacts to EU Court ruling on judicial reform. Prime Minister Mateusz Morawiecki will submit a request to the Constitutional Tribunal to comprehensively resolve the collision of EU law norms with the country’s Constitution and confirm existing case law in this regard, announced government spokesman Piotr Müller. Read more.

Belgrade, Skopje, Sarajevo, Ljubljana say goodbye to Zagreb mayor. A mass funeral, with little regard for social distancing measures, was held on Wednesday for Zagreb’s long-serving mayor, Milan Bandić, who died of a heart attack on Sunday, aged 65. Along with the family, friends, and close associates, the funeral was attended by senior state officials, including Prime Minister Andrej Plenković and Parliament Speaker Gordan Jandroković. President Zoran Milanović, who had been the president of SDP when Bandić was expelled, did not attend. Read more.

In other news, the company Rio Sava Exploration, a Serbian subsidiary of the Rio Tinto Corporation, announced on Wednesday that construction of a jadarite mine, which is used to obtain lithium for electric car batteries, should start next year and be completed in 2026.

BiH to become member of ‘Russia-Islamic World’ group. Newly appointed Russian Ambassador to Bosnia and Herzegovina, Igor Kalabukhov, proposed that BiH be included in the Group of Strategic Vision ‘Russia-Islamic World’, which aims to strengthen cooperation between Russia and countries where Muslims live, during a meeting with BiH’s House of Peoples Chairman, Bakir Izetbegović, on Wednesday, N1 reported.

The Group of Strategic Vision ‘Russia-Islamic World’ consists of “33 famous statesmen and public figures from 27 Muslim states, including the former prime ministers, former foreign ministers, a number of the largest theologians of the Islamic East from Indonesia, Morocco, Saudi Arabia, Iran, Kuwait, and many others,” the Group’s website says. (Željko Trkanjec | EURACTIV.hr)

“Albanians in Turkey and Turks in Kosovo are a bridge of friendship between our two countries. We appreciate the role of the Turks in Kosovo and they will continue to play an important role in my government as well,” Kurti added. (Željko Trkanjec | EURACTIV.hr)