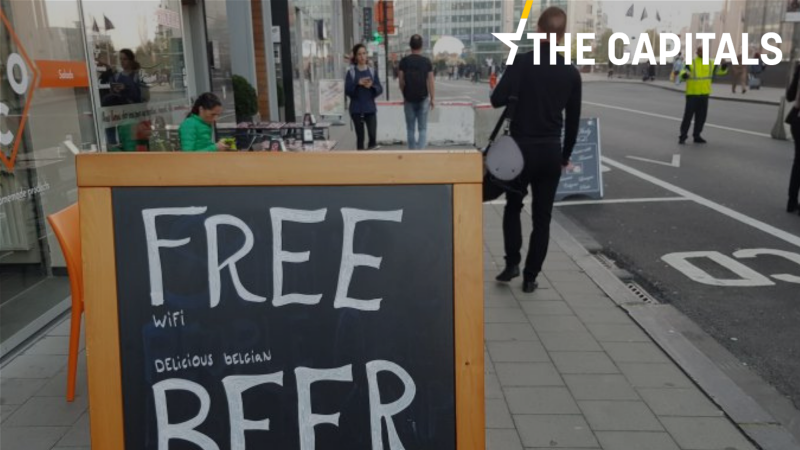 The Capitals is EURACTIV's morning newsletter.

Belgium will have to pay a penalty of €5,000 per day as long as the European directive on the roll-out of fast internet in the Brussels-Capital Region has not been fully implemented, the European Court of Justice ruled.

This is the first time that a member state has been required to pay a penalty for a first offence.

The judgment from the Luxembourg-based Court of Justice of the European Union (ECJ) came after the European Commission sued Belgium two years ago for failing to transpose into national law a 2014 EU directive aimed at encouraging the development of broadband across the bloc.

Medicine plan. A new national plan to improve access to medicines in France will be implemented in September. According to Health Minister Agnès Buzyn, it will address “increasing drug shortages”. According to a survey, 25% of French people have already been refused treatment for lack of medication. Among the treatments most likely to be out of stock are certain vaccines, antibiotics, anti-Parkinson drugs and some cancer drugs, according to the minister. In 2017, 538 reports of supply disruptions or tensions were identified in France by the French National Agency for Medicines (ANSM), compared with 44 in 2008. (EURACTIV.fr)

Overlapping on migration. Interior Minister Matteo Salvini has complained of having to tackle illegal migration, while defence minister Elisabetta Trenta accused him of having allowed the suspension of Operation Sophia, the EU military mission aimed at disrupting the business model of migrant smugglers in the Mediterranean. Prime Minister Giuseppe Conte has called a cabinet meeting for today to avoid “overlapping and misunderstandings” among different ministries on the migration issue. Besides, the national committee for order and public security chaired by Salvini decided that military boats from the Navy and the finance police will be employed to tackle illegal migration and “in defence” of Italian docks. (Gerardo Fortuna, EURACTIV.com)

The new government takes office. Kyriakos Mitsotakis, the clear winner of last Sunday’s election, announced a new government which will take office today at noon. It consists of politicians and technocrats but the number of the latter is unusual in Greek politics: more than 20. The conservative government also includes at least seven members of socialist-democrat origin, in a clear effort of the New Democracy (EPP) party to show an opening to other political forces.

But it provoked the reaction of KINAL (S&D), which suspended two of its members for joining the conservative government. KINAL, which gained just 8.2% of the vote, is under pressure from both its right (ND) and left (SYRIZA) parties, for domination in the centre of the political spectrum. (Theodore Karaoulanis, EURACTIV.gr)

Turkey escalates tension with a second drilling ship: A second Turkish drillship, named Yavuz, arrived on Monday off the coast of Cyprus. Last night Turkey issued a new NAVTEX, according to which Yavuz will drill until 30 September with the help of three supporting vessels. The Yavuz joins Fatih, another Turkish drillship stationed off the west coast of the island in search for natural gas. Cyprus already protested Turkey’s aggression at the UN and issued international warrants for everybody that helps Turkey to its illegal drilling.

EU High Representative Federica Mogherini yesterday warned Turkey over its intended new drilling operation at the northeast of Cyprus. She stated that “Turkey’s declared intention to illegally conduct a new drilling operation northeast of Cyprus is of grave concern” noting that “is a further unacceptable escalation which violates the sovereignty of Cyprus.”

“The European Union will respond appropriately and in full solidarity with Cyprus”, she concluded. (Theodore Karaoulanis, EURACTIV.gr)

During the Western Balkans summit in Poznan, Poland joined France and Germany and signed a declaration concerning EU competition policy. Its aim is to make it harder to block the creation of national champions. In Poland’s case, this means it might be easier to merge two state-owned oil companies – Orlen and Lotos. Last week, Orlen, the biggest petrochemical company in Central and Eastern Europe, officially submitted an application to the European Commission requesting approval for the merger. (Łukasz Gadzała, EURACTIV.pl)

Slovakia welcomes Croatia’a plan to adopt the euro. Croatia is on a good path, but needs to work on its debt which is above the 60% threshold, said Slovak Finance Minister Ladislav Kamenický (SMER-SD, PES) on the sidelines of the Eurogroup meeting. Slovakia, the only Eurogroup member from the Visegrad region, is also already assisting Bulgaria in its earlier bid to adopt the euro by providing an expert for the process of joining the “euro waiting room”, the ERM-2.  (Zuzana Gabrižová, EURACTIV.sk)

Palestine trusts Europe: Foreign Minister Tomáš Petříček met with his Palestinian counterpart Riyad al-Maliki to discuss their future cooperation. Al-Maliki said after the meeting that he was assured that the Czech embassy will remain in Tel-Aviv and won’t be moved to Jerusalem as Czech president Miloš Zeman proposed. “I don’t trust Americans, but Europeans,” said Al-Maliki in an interview with Czech News Agency.

Czechs go nuclear: The Czech government has approved a plan to build a new nuclear power plant Dukovany II with electricity conglomerate CEZ Group as the main investor. The European Commission has criticised the Czech Republic for not being ambitious enough regarding renewable sources of energies. (Aneta Zachová, EURACTIV.cz)

Police and army on the border with Croatia. After joint patrols with Italy at the border, Slovenian Prime Minister Marjan Šarec announced more police and the army will be posted to the “green” border with Croatia following increased flows of migrants. He added that the problem of illegal migrants entering Slovenia could be solved only by deploying Frontex on the EU’s external borders. In Croatia’s case, its borders with Serbia and Bosnia-Herzegovina.

Karl Erjavec, minister of defence, said he will do all that is needed for to people “to feel safe”. This year, 5,000 irregular migrants have been arrested in Slovenia, half of whom have been returned to Croatia, and about 130 human traffickers have also been detained. (Željko Trkanjec, EURACTIV.hr)

Romania is eyeing the energy, transport, environment or neighbourhood policy portfolios in the next Commission, according to sources from the ruling socialist party PSD. (EURACTIV.ro)

Scandal with the protection of EU and NATO secrets: The military prosecution indicted the head of the “Military Information” service Plamen Angelov and his predecessor Svetoslav Daskalov for having issued over 500 clearances for access to secret NATO and EU information in breach of the law. Reportedly in the period April 2016 – May 2019, access to information labelled “secret” and “top secret” has been authorised by an officer, and not by the leadership of Military Information, as required by law. It id unclear who obtained access to the secrets, and what kind of information they obtained. (Georgi Gotev, EURACTIV.com)

Who’s to blame? The media. Public Administration Minister and HDZ (EPP) political secretary, Lovro Kuščević, resigned from both posts because of affairs over unregistered property. Prime Minister Andrej Plenković said this was the right thing to do, given “all the circumstances in the media”. Kuščević added that he is a “responsible politician” and that “this negative media perception has an impact on the party and government”. Kuščević will return to parliament as an MP. (Željko Trkanjec, EURACTIV.hr)

New powers to local police: The Serbian parliament has adopted a Law on Communal Police, granting officers greater powers and allowing municipalities to set up their own municipal police. So far, communal police has operated in cities only. Under the new law, law enforcement roles of communal police include checking the identity of persons who have witnessed misdemeanours, issuing misdemeanour warrants, filing requests for initiating misdemeanour proceedings and pulling over. Officers will be able to make video and audio recordings, carry handcuffs, batons and pepper spray, and, when approved in writing by relevant police chiefs, wear both, uniforms and plain clothes.(beta.rs, EURACTIV.rs)

Erdoğan arrives with conflict on airport: Turkish President Recep Tayyip Erdoğan arrived in Sarajevo on Monday for a two-day official visit and a conflict with Bosnian border police erupted immediately. “They were aggressive, acting as though they were in their own country. They don’t respect our laws at all. There was pushing and shoving and they refused to comply with procedure and regular control. They all deserved to be apprehended,” said Bosnian Border Police Chief Zoran Galić. Jutarnji list, EURACTIV’s media partner, reports that Erdoğan’s bodyguards reached for their weapons and direct conflict with the border police was narrowly avoided. (Željko Trkanjec, Euractiv.hr)