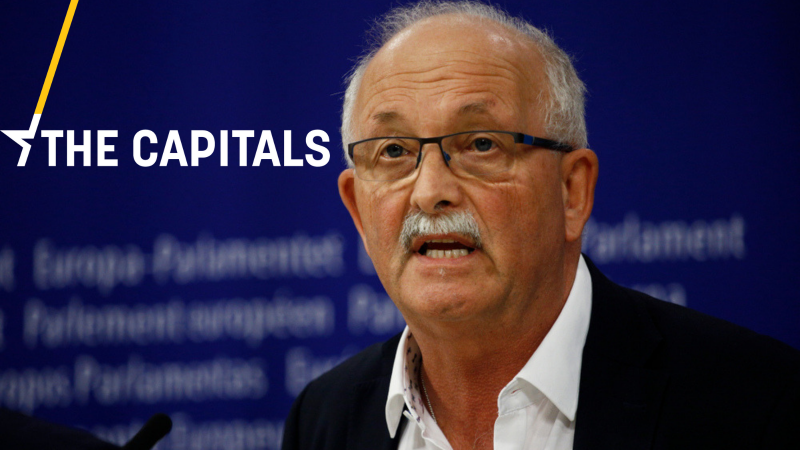 The relation between the centre-right European People’s Party (EPP) and far-right groups is not clear, warns Udo Bullmann, chief of the Socialists and Democrats (S&D) group in the European Parliament.

And this raises questions about whether they are still reliable EU partners, the German politician told EURACTIV.com in an interview.

“We see the EPP moving to the right side of the political spectrum. We see the President of the European Parliament Antonio Tajani flirting with the far-right, or we see the EPP watching Orbán’s anti-democratic drift for years and then distancing itself only half-heartedly,” he said.

Bullmann had much kinder words for French President Emmanuel Macron, who slammed the EPP’s decision to “suspend” rather than expel Orbán’s Fidesz party, after its authoritarian drift has raised concerns in his own political family.

“However, though pro-European is necessary, this alone is not enough. We need leaders who want to fight for a fairer and sustainable Europe,” the S&D chief said.

“In this respect, we invite President Macron to discuss our proposals with all pro-European partners in Europe. They are the way forward for a real change for Europe,” Bullmann said.

In an interview with EURACTIV, Carlo Calenda, a centre-left politician (Partito Democratico) who wants to create a progressive pro-EU alliance in Italy, said: “There is a large bloc from Macron to Tsipras that, even with different shades, wants to pursue a project of a united Europe and there is another bloc that wants to blow Europe up”. (Sarantis Michalopoulos, EURACTIV.com)

In Berlin, German Christian-democratsCDU/CSU presented their first joint programme for the EU elections. The main points are Europe’s role in the world, foreign policy and security. No mention is made however of the eurozone and EU social policies, as recently proposed by France’s Emmanuel Macron. (Claire Stam, EURACTIV.de)

In Paris, EU Affairs Minister Nathalie Loiseau is due to step down as well as the WWF director in France, Pascal Canfin. Both are expected to top Macron’s list for the EU elections. EU counsellor at the Elysée, Clement Beaune, should replace Loiseau.

In the meantime, France and Germany held their first session of a joint mini-parliament on 25 March in Paris, which aims to further deepen cooperation between the parliaments of both countries. They plan to meet again in September in Berlin but despite the grand ceremony, the two chambers are not keen to cooperate too closely, as German CDU is reluctant about the idea, according to EURACTIV France. The whole plan looks a bit like a linguistic exchange between two powerful chambers. (EURACTIV.fr)

‘No support’ for MV3, yet: UK Prime Minister May’s Brexit plans do not yet have enough support to warrant a third meaningful vote, the Conservative leader has reluctantly admitted in an address to the House of Commons.

A third vote on May’s Brexit deal was due to take place during the first half of this week, but the plans have had to be shelved, following a phone call with the leader of Northern Ireland’s Democratic Unionist Party leader, Arlene Foster.

The ruling Conservative party would need support from their DUP partners in government in order to get the plans adopted, but so far the Northern Irish party has had reservations over the backstop measures, which they regard as potentially severing ties with the UK in favour of a closer relationship with the EU.

Meanwhile, the DUP’s leader in Westminster, Nigel Dodds, did not mince his words on Monday, heavily criticising May’s leadership style and a “fundamental lack of preparation.” “What’s going to happen in another two weeks that couldn’t have happened up to now?”, he asked May. (Samuel Stolton, EURACTIV.com)

Socialists set to win the elections: A poll published by El País has shown that the Socialist Party (PSOE) will clearly win the general election on 28 April but falls short of an absolute majority. According to projections, the socialists would get 122 seats followed by the center-right Popular Party (PP), which will get 76 seats in the 350-seat parliament.

Together with their far-left ally Podemos, the socialists would have 162 seats in parliament while the centre-right Ciudadanos (Citizens) will gain 23 seats.

PM Sanchez could still ensure a majority if he gets backing from an array of parties, including Catalan separatists, who supported him last June when he won a vote of confidence against former conservative PM Mariano Rajoy. (EuroEFE.EURACTIV.es)

Mysterious allies: Matteo Salvini, the leader of Italy’s Lega party currently in government, is stepping up plans to form a new political group in the next EU Parliament. The far-right leader announced yesterday he will organise a conference in the first week of April with “allies” who will team up to form the new political group after the May European elections.

“I don’t have it in my head to leave the EU, but to stay in with our head high,” he said after  the centre-right registered another electoral in the Basilicata region.

Copyright protest: Italy’s Wikipedia webpage was taken off-line by its developers in the run-up to today’s vote on copyright in the European Parliament. “Even though the directive would not touch Wikipedia directly, Articles 11 and 13 would weaken the Internet, so it would weaken Wikipedia,” according to a “black page” posted on the website. (Gerardo Fortuna, EURACTIV.com)

Turks ‘welcome’ Tsipras: Greek PM Alexis Tsipras said yesterday his helicopter was “harassed” by Turkish fighter jets on its way to Agathonisi, a small island in the Aegean just off the Turkish coast.

“I had the honour of being welcomed, here in Agathonisi, by some Turkish air force fighters,” the PM said on the occasion of Greece’s Independence Day from the Ottoman Empire.

Ankara doesn’t accept international treaties that establish Greek sovereignty in the Aegean Sea. Tsipras said these “stupid actions” made no sense, and only waste kerosene for no reason. The Greek prime minister said he would “reach the remotest Greek corner,” even if he needs “to swim”. (Theodore Karaoulanis, EURACTIV.gr)

Latest polls: A survey commissioned by the Civic Platform (PO/EPP) showed that the European Coalition has the support of 41.82% of voters, while the ruling conservative Law and Justice (PiS/ECR) lags slightly behind with 39.35%. Third comes “Poland’s Macron”, Robert Biedron, with his Wiosna party (Spring) getting 7.49%.

Another poll, published by DoRzeczy, a pro-government weekly, gives Law and Justice 42.2%, while the European Coalition stands at 39.3%. In this survey, the Spring gets 6.1% of the votes. (EURACTIV.pl)

Government’s fall anniversary: The Czechs commemorated the 10th anniversary of the government’s collapse during the Czech EU presidency. “Without Angela Merkel’s support, we would have never been able to face the pressure coming from the French administration, which wanted to steal our presidency. But we dealt with it,” former PM Mirek Topolánek told public radio broadcaster Czech Radio. The Czech Republic is already preparing for its second EU presidency in the second half of 2022.

Controversial Imam expelled: The head of the Prague Muslim Community, Imam Leonid Kushnarenko, was expelled from the community on 25 March after he called on Muslims to arm themselves in response to a shooting in New Zealand. (Aneta Zachová, EURACTIV.cz)

Unambitious transformation of the Slovak coal region: Greenpeace has criticised the government’s plans to transform the coal-mining region of Horná Nitra. According to an analysis co-authored by Greenpeace and Slovak economist V. Páleník, the plan lacks ambition and is not in line with EU legislation, as it does not provide a complete shutdown of the mines, a condition to draw EU financial support for coal regions in transition, the analysts said. (Zuzana Gabrižová, EURACTIV.sk).

Embassy row: Jordan’s King Abdullah cancelled visit to Bucharest after PM Viorica Dancila announced that Romania would move its embassy to Jerusalem. President Klaus Iohannis accused the PM of undermining Romania’s relations with the Arab world. Her Israeli counterpart, Benjamin Netanyahu, hailed the announcement but Dancila later softened her statement, telling a TV station it was “her personal opinion”. In reaction to the criticisms, she also pledged to follow all the constitutional steps required for the move. The final decision rests with the President, and Iohannis is not keen to break with the official EU line on the issue. (EURACTIV.ro)

Transport minister ‘mad’ at absent MEPs: A scandal is unfolding in Bulgaria following a decision of the European Parliament on Monday (25 March) that put a key piece of legislation, EU Mobility Package, to the vote on Wednesday.

Bulgaria is against the Package, dubbed by some as the ‘Macron law’. Eastern EU members complain it puts them at a disadvantaged position compared to their Western peers. Sofia had hoped that the whole legislative process would be postponed for the next European Parliament.

However, 156 MEPs against 154 decided that the vote would be held on Wednesday. Bulgarian Transport Minister Rossen Zhelyazkov said he was “mad”, because of the absence from the vote of three Bulgarian MEPs: Svetoslav Malinov (EPP), Nikolay Barekov (ECR) and Nedzhmi Ali (ALDE). Zhelyazkov says Bulgaria’s entire road transport sector, which in his words represent 17% of the country’s economy, would go bankrupt if the Mobility package is passed. Bulgarian truck drivers are heading to Strasbourg to protest on Wednesday.

Barekov wrote on Facebook his absence was deliberate because the Macron package would bring better wages for Bulgarian truck drivers. (Georgi Gotev, EURACTIV.com)

An hour gap at the Slovenia-Croatia border:

In addition to a 28-year dispute over the maritime borderline, Zagreb and Ljubljana found another area of disagreement. Slovenia wants to stick to wintertime after 2021 while Croatia is more open to summertime. (Željko Trkanjec, EURACTIV.hr)

Gay Iranian granted asylum in Serbia: A gay man from Iran was granted asylum in Serbia on the basis of belonging to a social group, the Centre for Support for Asylum Seekers has said. His fear of living in the country was justified, considering the systemic human rights violations of LGBT people in Iran and his personal traumatic experience, the centre explained. (Beta-EURACTIV.rs)