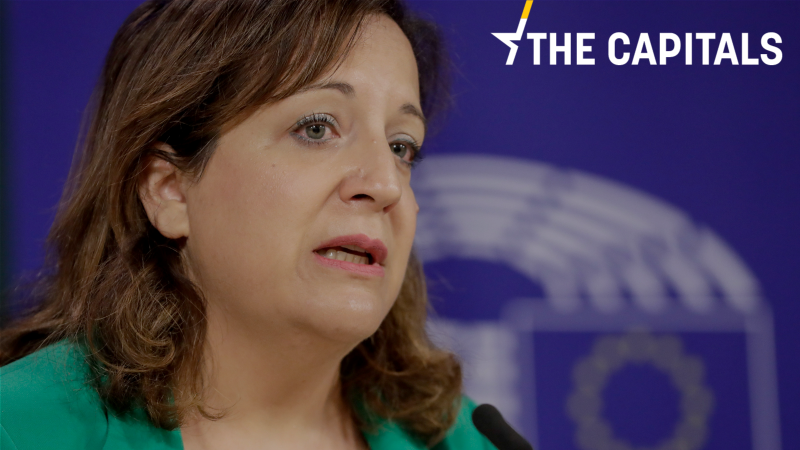 The Capitals is EURACTIV's daily newsletter from across Europe. [EPA/STEPHANIE LECOCQ]

The Socialist group in the European Parliament (S&D) is not planning to “simply give its green light” for conservative German Ursula von der Leyen to be the next European Commission President, a senior S&D source told EURACTIV.com.

“Her agenda will need to have progressive elements,” the source said.

EU leaders have nominated German centre-right von der Leyen (EPP) to lead the next EU executive. However, she still needs the approval of the Parliament, which will come with a price tag, say MEPs.

The socialists in the EU House have been highly critical of the European Council’s package, saying that their candidate, Frans Timmermans, was sacrificed after the strong opposition expressed by populists and the Visegrad countries. Read: Visegrad leaders claim victory in race for EU top jobs

“Our candidate was cast out because he defended the European values and the rule of law. I can assure you that we will defend these principles with even more energy,” S&D Group leader Iratxe García said yesterday.

An official discussion on the issue is due next week, but the S&D source said the German, Dutch, Belgian and British delegations have already fiercely opposed von der Leyen.

The source said García is closer to a compromise solution, apparently under pressure from Spain’s Socialist Prime Minister Pedro Sánchez, who managed to secure a job for his foreign minister, Josep Borrell, as the new High Representative for Foreign Affairs as part of the EU Council package deal.

“The rest of the group is still negative but ready to listen and give a chance to explain her programme,” the source said.

The same source added that the objective is to push the EPP candidate toward a more progressive agenda, especially when it comes to migration, climate change and social issues.

However, EURACTIV understands that despite the initially strong opposition, EU socialists have already started to tone down their rhetoric.

Meanwhile, in Berlin, the EU Council package deal has caused turmoil in the coalition government. The social democrats (SPD) have lashed out against Chancellor Angela Merkel, accusing her of withdrawing from the Spitzenkandidaten principle.

Although the current heads of the socialist party have denied rumours suggesting that they might quit the coalition with Merkel’s CDU, the minister for EU affairs, the SPD’s Michael Roth still hopes for a return to the initial package, which included Frans Timmermans.

EURACTIV Germany reports that he would be happy to see the European Parliament turn its back on the Council by electing one of the Spitzenkandidaten.

On the other hand, CDU leader Annegret Kramp-Karrenbauer said that when the EPP top candidate Manfred Weber (CSU) realised that he did not have a majority, he put aside his personal interests “for the sake of Europe and Germany” and left space for Timmermans to get the Commission post.

Conservatives expected to score high. The conservative New Democracy (ND-EPP) party is leading all polls ahead of the national elections on Sunday. In the latest two polls, ND is polling between 36-40%, followed by the ruling leftist SYRIZA party 24.5-29.5%, while the socialist KINAL (S&D) is third with around 7%.

For the first time since 2012, it’s highly probable that New Democracy will be able to form a single-party government, EURACTIV.gr reports. (Theodore Karaoulanis, EURACTIV.gr)

Sarkozy’s new book. Released last week, Nicolas Sarkozy’s new book ‘Passions’ has quickly become the most sold book in France, and boosted his popularity, encouraging people to think of him as a saviour for his collapsing Les Republicains party. The nine judicial procedures he has been through seem not to have affected his popularity: he is currently is the second most popular politician in France, just behind Nicolas Hulot. Read more on EURACTIV.fr

A modern competition policy. The economy ministers of Poland, France and Germany, met in Poznan on Thursday to discuss EU competition rules. Following the Alstom-Siemens failed merger, the three countries said the EU should be more flexible when it comes to mergers in the EU in order to compete with China.

In a joint paper, the countries said the EU Commission should take into account competition at global level but also ensure that the “political demands from the Council are heard”. (EURACTIV.fr)

Far-right insults. The official account of the far-right Vox party has posted a tweet calling centrist Ciudadanos chief Albert Rivera “scared” and “shameless,” and accusing him of “kissing French President Emmanuel Macron’s ass”. El Pais wrote that the incident took place in light of the ongoing negotiations in the Madrid and Murcia regions to choose a new premier, and the pressure on Vox to support the candidates chosen by the conservative Popular Party (PP). Read more on El Pais.

>>Spanish liberals under fire over pacts with far-right

4 out of 21 MEPs in IMCO committee. The Czech voice will be missing from the EU Parliament Foreign Affairs Committee (AFET) but 4 of its deputies will work in the Internal Market and Consumer Protection committee (IMCO), 3 on Industry, Research and Energy (ITRE) and 3 on the Agriculture committee. (Ondřej Plevák, EURACTIV.cz)

Romania sees no use of CVM. Romania’s Foreign Minister Teodor Melescanu said the Cooperation and Verification Mechanism (CVM) has no point in the EU, which has a global mechanism for rule of law deviations. Both Romania and Bulgaria have been asking for years to have the Cooperation and Verification Mechanism lifted, but poor records in fighting corruption have prompted the European Commission to maintain the mechanism in both countries. (EURACTIV.ro)

Grabar-Kitarović said that the website would raise public awareness of the position of women in society and help them balance their family and work life. (Željko Trkanjec, EURACTIV.hr)

Counterfeit cigarette slavery. A large industry producing counterfeit cigarettes has been uncovered in the Plovdiv region’s villages of Ryzhevo, Konare and Trud. TV footage has shown huge production facilities in Trud estimated to be worth at least €5 million. According to Prime Minister Boyko Borrisov, the ’employees’ at the factories were mainly Ukrainians and Moldovans who were not allowed to leave the facility. (Georgi Gotev, EURACTIV.com)