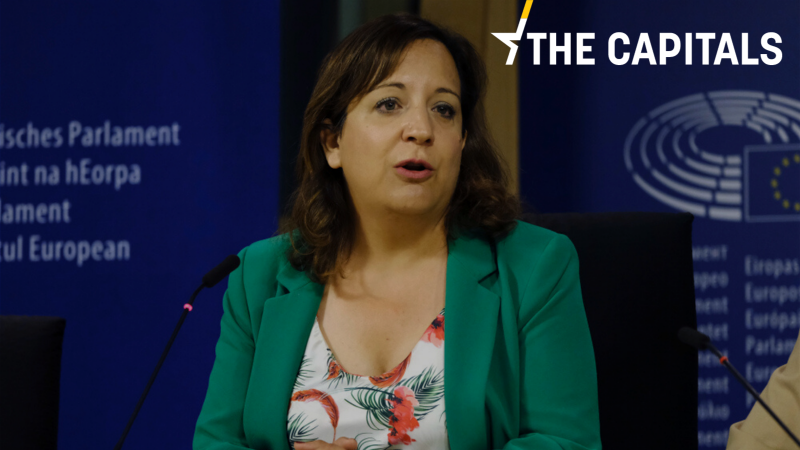 "Creating debt without planning how to pay it would not be credible," Iratxe García said. [Shutterstock/Alexandros Michailidis]

Before you start reading today’s edition of the Capitals, feel free to have a look at The Coca-Cola Company’s plea, along with 20 other businesses, to keep the current EU Water Framework Directive intact since they claim “watering it down” would put Europe’s precious freshwater resources at risk.

A new basket of EU own resources. Creating debt without planning how to pay it would not be credible, Iratxe García, the leader of the Socialists and Democrats in the European Parliament, stated in a letter sent to EU leaders ahead of the 23 April EU Summit.

For this reason, the Spanish MEP wants a new set of robust own resources for EU budget to finance the Recovery Plan.

In her letter, García, a close ally of Spanish Premier Pedro Sánchez, suggests that the Recovery Fund must be designed within the community framework and be placed within the headroom between the MFF ceilings and the own resources ceilings.

Shortage of medicines. Croatian MEP Romana Jerković (S&D, Croatia) yesterday was appointed as S&D shadow rapporteur in the Committee on Industry, Research and Energy tasked with drawing up an opinion on the document “Shortage of medicines: how to address an emerging problem”.

“We are more acutely aware of this problem now at the time of this pandemic. That is why I see this appointment as both a challenge and an opportunity to effectively address this problem in the European Parliament for the benefit of our citizens,” she said in a press release.

An increasing number of Germany’s 16 states have decided to begin enforcing mandatory mask-wearing on public transport and in shops. Saxony was the first state to introduce such regulations, coming into effect on Monday (20 April). Bavaria also announced their new requirements on Monday followed by 9 more states including Berlin, Baden-Württemberg, and Hamburg. Sarah Lawton reports from Berlin.

Green Deal could use available technologies ‘without prejudices’. The much-awaited re-visit of the Renewable Energy Directive (RED II) as part of the new Green Deal should get rid of “prejudices” and take advantage of technologies and products already placed on the market, Ewald-Marco Münzer, CEO of waste-based biodiesel company Münzer Bioindustrie GmbH in Vienna, told EURACTIV.com in an interview. Read the full story here.

Lockdown rollback preparations. While restaurants, cafes, bars and other non-essential shops and business will remain shut and free movement will continue to be limited until 3 May at least, the Belgian government is exploring ways to gradually lift the lockdown measures with several ideas. Alexandra Brzozowski has more details.

Dutch PM opens schools, childcare and children’s sports clubs over the course of May. These are the only measures that can “responsibly” be lifted, Prime Minister Mark Rutte stated in a press conference Tuesday night (21 April). All other “intelligent lockdown” rules were extended until at least 20 May, while all events including professional football are suspended until 1 September. Davine Janssen has the detail.

Plans to reopen the economy. Prime Minister Leo Varadkar has revealed that his government is preparing a recovery plan to reopen the Irish economy. “There won’t be any change to the restrictions until 5 May, but at the moment we are preparing a plan which we’ll have ready before then which will set out in a step-wise fashion, how we will reopen our economy, how we will reopen our society,” Varadkar told RTÉ’s Prime Time yesterday. (Samuel Stolton | EURACTIV.com)

Fresh confusion over EU procurement opt-out. The UK government’s decision to opt-out of an EU procurement scheme for urgently needed medical equipment to cope with the coronavirus crisis was plunged into fresh confusion on Tuesday (21 April) after ministers slapped down a statement by the top Foreign Office civil servant that it had been “a political decision”. EURACTIV’s Benjamin Fox has the story

Children under 14 allowed to step outside. Spain’s government said Tuesday (21 April) that children under the age of 14 will be allowed to accompany adults on essential errands after plans to allow only under 12-year-olds to do so provoked a barrage of criticism from political parties, regional presidents and even the government’s leftist coalition partner, Unidas Podemos.

Spanish children will have spent six weeks indoors by the time the tweak to the state of alarm comes into effect on 27 April in what is one of the strictest lockdowns in Europe. Read the full story by EURACTIV’s partner, EFE.

Social distancing and masks until COVID vaccine ready. Social distancing and facemasks will be needed in phase two of the coronavirus emergency until a vaccine is ready for use, Italian PM Giuseppe Conte said on Tuesday. A contact tracing app will be voluntary and without penalties for those who don’t sign up, he added. Read more on EURACTIV’s partner ANSA.

150 COVID-19 cases in a refugee camp. After a 28-year-old pregnant refugee tested positive for COVID-19 Greek authorities found that in total 150 refugees out of 475 were infected with the virus in the Kranidi refugee hostel in Peloponnese. Meanwhile, Greece has activated the EU Civil Protection Mechanism. Sarantis Michalopoulos has more.

Warning report. China is attempting to divide the West and gain dominance, according to the Czech Foreign Ministry’s draft report seen by EURACTIV.cz’s media partner Aktuálně.cz. The draft, which explores how the coronavirus crisis changes the world, writes that China wants to use the pandemic to boost its international position, promote its system of governance and obtain support from EU member states. The document explicitly mentions the 17+1 initiative of Chinese president Xi Jinping targeting Central and Eastern European countries.

While the report also delves into Russia’s attempts at destabilising the West through a disinformation campaign, Foreign Minister Tomáš Petříček admitted that Czech foreign policy towards China and Russia could change in the near future. (Aneta Zachová | EURACTIV.cz)

Have a look at a previous edition of the Capitals looking into Chinese and Russian influence in the Czech Republic.

Cross-border commuters at risk. Slovaks who live in Hungary and Austria but commute every day for work to Bratislava will, as of 1 May, be forced to present proof of having tested negative for COVID-19, and pay for it. However, while it has now become clear that many many will not be able to get tested in the remaining time, many critics have also highlighted the fact that 30-day old results do not serve a purpose. “We will be looking for solutions on how to suspend the rule or cancel it altogether, the state secretary of the ministry of foreign affairs Martin Klus (SaS) said in a statement.

In other news, the National Criminal Agency raided the home of the recently dismissed director of National state reserve, Kajetán Kičura, who, under the previous government, was in charge of dubious and allegedly overpriced procurement of protective medical material when the coronavirus started to spread. (Zuzana Gabrižová | EURACTIV.sk)

Anti-crisis shield 3.0. The Polish government is set to present a third set of measures to fight the fallout of the COVID-19 crisis by the end of the week. The new “shield” is meant to introduce subsidies for apartment renters, special solutions for local governments and the tourism industry, as well as larger subsidies for employees’ salaries at the largest companies. Read more.

Seasonal workers complain about working conditions in Germany. After 2,000 seasonal Romanian workers crowded at Cluj-Napoca airport to fly to Germany while the pandemic was in full swing in both countries just two weeks ago, these same workers are now complaining about their working conditions. Bogdan Neagu reports from Bucharest.

Meanwhile, Romanian President Klaus Iohannis said that some restrictions could be lifted after 15 May, if the number of COVID-19 positive cases goes down. “So, after May 15, if the number of infected people decreases, if the number of deaths due to the disease decreases, if we all respect the measures imposed by the authorities and things go well, it is clear that we can then enter a phase of relaxation,” Iohannis said. Romania registered more than 9,200 coronavirus infections and almost 500 deaths linked to the virus as of Tuesday (21 April).

“With this, the government rounded up and supplemented the financial cushion during the epidemic and ensured liquidity for the Slovenian economy,” Jansa said. The new bill adds another 300,000 beneficiaries, including part-time students who are not employed, self-employed workers, and female farmers over 65 years of age. (Zoran Radosavljevic | EURACTIV.com)

Serbia drops down world press freedom index. Serbia dropped three places in the 2020 World Press Freedom Index, according to the ranking published by the Reporters Without Borders (RSF) on Tuesday (21 April). After the country ranked 90th in 2019, it has now fallen to the 93rd spot among the 180 countries in this year’s report with a score of 31.62, which, except for Montenegro, is the lowest ranking in the region. Read more.

In other news, Vojvodina’s health secretary Zoran Gojkovic said on Monday (20 April) that reporters’ questions were not the reason why journalists had been banned from attending news conferences on the COVID-19 pandemic in Serbia, as their safety was the government’s prime concern. Reporters can attend the conferences as of Tuesday (21 April), he added. EURACTIV Serbia takes a closer look.