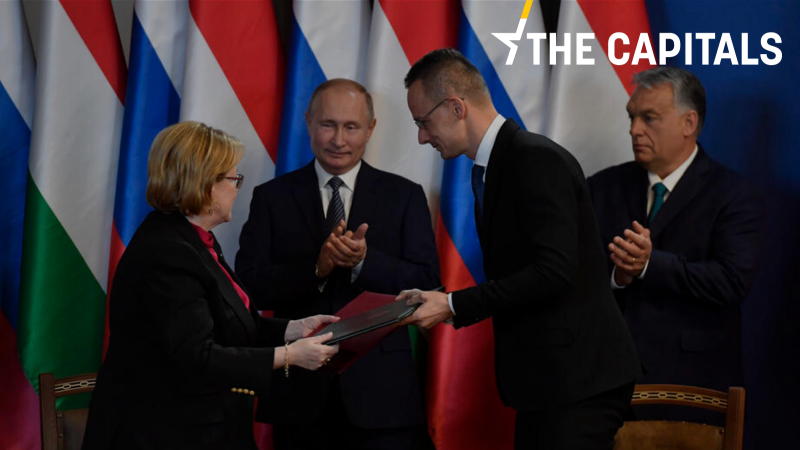 Before you start reading today’s edition of the Capitals, feel free to have a look at The Brief on Europe’s broken border politics.

BUDAPEST. The European Union would benefit from closer cooperation with the Eurasian Economic Union (EAEU), Hungary’s Foreign Minister Péter Szijjártó has said in Minsk. The EAEU, whose rotating presidency is currently held by Belarus, is a free trade agreement of some former USSR members under the umbrella of Moscow.

“It is very important to build a partnership, and this is why we propose further easing of sanctions against Minsk,” Szijjártó said, adding that the raw materials in the EAEU area could play an important part in Europe’s economic development. Besides, some of the most important energy transit routes cross Belarus, he added. (Željko Trkanjec | EURACTIV.hr)

Google v Hungary: 1-1. While EU law permits Hungarian authorities to oblige Google and other foreign advertising service providers to submit a tax declaration, the penalty system in place was too disproportionate and thus amounted to a restriction on the freedom to provide services secured by EU treaties, found the European Court of Justice on Tuesday (3 March). Željko Trkanjec has the detail.

Meanwhile, Viktor Orbán’s daughter is the second most powerful woman in Hungary, according to Forbes Hungary‘s sixth annual list of the 50 most influential women in Hungary. Read more.

Walk-outs in Thuringia. The Free Democratic Party (FDP) announced yesterday (3 March) its plan to walk out of the plenary during this afternoon’s vote to protest the two minister-president candidates for the state of Thuringia, former incumbent Bodo Ramelow (Die Linke) and AfD state party leader Björn Höcke. EURACTIV Germany’s Sarah Lawton has more.

‘Reducing prices for consumers should no longer be EU’s focus’, says Breton. “To date, it is rather the consumer who has been put forward. While reinforcing these achievements, it is now necessary to go further. Europe’s industrial policy cannot be conducted with the sole aim of reducing prices for the consumer,” said the EU’s internal market Commissioner, Thierry Breton, in a long interview with Le Figaro on Tuesday (3 March). The French Commissioner also laid out the Commission’s new industrial strategy, which will be presented on 10 March.

Aalst investigation request. A dozen Jewish organisations in the Netherlands and Dutch politicians ask the police to investigate anti-Jewish displays of the Aalst Carnival parade, demanding that the Belgian authorities take action against the initiators. Alexandra Brzozowski has more details.

Austria will not accept refugees but sends humanitarian aid to Syria. After Green leader Werner Kogler advocated for taking women and children should the situation at the Greek-Turkish border fail to improve, Home Affairs Minister Karl Nehammer of conservative coalition partner ÖVP clarified that this was not part of the coalition programme. While Austria decided to send €3 million of humanitarian aid to Syria, Kogler has now stated that what he said had been his “private opinion”. (Philipp Grüll | EURACTIV.de)

‘Stop them at the border’. In the midst of the evolving situation on the Turkish-Greek border, the populist Finns Party called on Tuesday (3 March) for reintroducing border controls within the European Union.  EURACTIV’s Pekka Vänttinen looks at what else was said.

Labour’s woes increase. The Labour party faces a drubbing in May’s local elections as the leaderless opposition party’s woes intensify. Internal party documents suggest that the party, which elects a new leader on 4 April, faces losing 300 local councillors in “one of our worst local election performances in recent history”. Benjamin Fox has more.

Cancel St. Paddy’s? St Patrick’s Day parades in Ireland should be cancelled as a means to avoid the potential spread of the deadly coronavirus, a leading international virologist has suggested. EURACTIV’s Samuel Stolton looks into it.

Sick leave linked to COVID-19 to be paid in full. After Portugal recorded its fourth coronavirus case on Tuesday (3 March), Economy Minister Manuel Caldeira Cabral assured workers who are absent due to COVID-19 that they will receive “100% sick pay from day one” after this has been determined by a health authority. ( Ana Cristina Gomes and Elsa Resende, Lusa.pt )

Some 2,263 people have been infected with the coronavirus in Italy, 428 up on Monday, and 79 people have now died of it, 27 up, emergency commissioner and civil protection chief Angelo Borrelli said Tuesday. Some 160 people have recovered, 11 more than Monday, he said, according to ANSA.

Greece needs ‘substantial’ EU support. “Greece must seek substantial EU support, as these people do not come here to stay on Lesvos or Limnos islands, they are coming to move on through to the rest of Europe,” leftist Syriza leader Alexis Tsipras told Mega TV station in an interview. According to Tsipras, “we are facing a geopolitical threat by Turkey,” which he said “uses refugees as political tools and has geopolitical aspirations.” Read more on Athens-Macedonian News Agency.

Mitsotakis appoints new EU-US relations aide. Thanasis Bakolas, a close aide to Kyriakos Mitsotakis, will serve as a Brussels-based advisor to the Greek prime minister on issues related to the European Union and the United States.

How many parties in the government? Although leaders of prospective coalition parties met with President Zuzana Čaputová, the new government could still take various shapes. While Andrej Kiska´s party (Za ľudí) and Richard Sulík´s Freedom and Solidarity (SaS) would prefer a coalition without Boris Kollár´s We are family, Igor Matovič (OĽaNO) prefers a coalition of four, as three parties would make a fragile majority.

“One MP may be hit by a car, another will have gallbladder stones and the third one may go mad, or will be bought by (ex-PM Robert) Fico. Then you find yourself in a situation that you have promised something to the people but you do not have means to do that,” said Matovič, who explained why he prefers a stronger majority in the parliament. (Zuzana Gabrižová | EURACTIV.sk)

Czechs are not ‘climate sceptics’. 84% Czechs think that climate change caused by human activities threatens our future, according to a new survey by STEM agency. While most Czech citizens (79%) think that the Czech Republic should try to achieve net-zero carbon emissions, half of the Czechs have no idea about the term “carbon neutrality”. This is quite different from the position of the Czech government, which, after having opposed the idea of carbon neutrality by 2050, had only changed its mind to have access to the Just transition fund. (Aneta Zachová | EURACTIV.cz)

More waste. The latest annual member states’ reports for the shipments of waste regulation show a substantial increase in waste shipments to Bulgaria. EURACTIV Bulgaria’s Krassen Nikolov looks into why.

And another round of hearings… The committees of the Romanian parliament started a new round of hearings of the proposed ministers on Tuesday (3 March). Last week, President Klaus Iohannis designated current finance minister Florin Citu with forming a new government. Yet, the proposed ministers are the same, except for the finance ministry post, as the ministers in the current interim government – which was toppled by the Parliament in a no-confidence vote – and the first proposed cabinet, which did not get to be voted upon because Prime Minister Ludovic Orban renounced trying to head another government following a Constitutional Court decision.

In other news, Romania’s telecom watchdog ANCOM announced plans to prepare documentation for the allocation of 5G frequency bands by the end of the third quarter of 2020 with the auction sale, therefore, being scheduled for the last quarter of 2020, according to ANCOM’s action plan for the current year. EURACTIV Romania digs deeper.

Janša formed stable government. With 52 votes in favour and 31 against, conservative anti-migration SDS (EPP) leader Janez Janša was elected as Slovenia’s new prime minister. As he obtained more votes than the number of new MPs in his newly formed coalition (48), the new prime minister will most likely survive until the next elections set for 2022. At EU level, the new PM would be a strong ally of Hungarian Prime Minister Viktor Orbán (EPP) in the EU Council. (Željko Trkanjec | EURACTIV.hr)

In other news, there are nine confirmed cases of coronavirus infection in Croatia as of 3 March. “The epidemiological situation in Croatia is still calm and under control, and I am more concerned about the situation in Italy, where 342 new cases have been reported today and we will focus on that,” said Health Minister Vili Beroš.

In Croatia, 231 people have been tested for COVID-19 and 2,430 people have received a decision from a border inspector to self-isolate as of yesterday (3 March). Besides, specific recommendations for the elderly and chronic population have been released.  (Karla Junicic, EURACTIV.hr)

Vucic and Thaci talk in Washington. President Aleksandar Vucic said in Washington on Monday night (2 March) that he had had a usual meeting with Kosovo President Hashim Thaci. He said Belgrade was expecting to see the removal of tariffs on the goods coming from Serbia to enable the resumption of a dialogue regarding the fundamental issues with Pristina. EURACTIV Serbia has more.

In other news, President Vucic said on Monday (2 March), after meeting with US Secretary of State Mike Pompeo in Washington that they had had a sincere and profound conversation and that he was grateful to US officials for their clear attitude of wanting to hear and understand Serbia. He said he could say with cautious optimism that a certain degree of trust was developing in US-Serbia relations.

“With the Americans, you know exactly where you stand. I know we don’t see eye to eye on the status of Kosovo, but I thank them for wanting to hear Serbia out and understand our problems,” Vucic told reporters after speaking with Pompeo.

He said he could expect no more, as it would be “unrealistic”.

Vucic posted on the Future of Serbia Instagram profile that he had asked Pompeo for Washington’s understanding of Serbia’s position and its assistance to Serbia in advancing its economy, politics and all other areas through various mechanisms.

Meanwhile, Foreign Minister Ivica Dacic said on Tuesday (3 March) that the Republic of Sierra Leone had withdrawn its recognition of Kosovo as an independent state, meaning that Kosovo no longer had a majority in the UN, according to the ministry’s statement.

According to Dacic, who is on an official visit to Sierra Leone, out of 193 UN member states, 92 currently recognise and 96 countries do not recognise Kosovo, with five showing “a fluid stand,” that is, mainly recognise but no longer vote for Kosovo, meaning that Kosovo no longer has a majority in the U.N.

“It is my particular pleasure to show a note from the foreign ministry stating that Sierra Leone is withdrawing its recognition of Kosovo as an independent state and will respect the results to be achieved in the dialogue brokered by the EU and the UN,” Dacic said.

BiH gets ‘B’ as its credit rating. The international rating agency Standard and Poor’s (S&P) gave BiH a credit rating amounting to “B” with a positive outlook, meaning there is still high credit risk but its speculative. BiH’s economy continued to grow despite its longstanding political fragmentation and the country’s real GDP growth is expected to increase by 2.7% over the next four years, according to the agency’s analysts.

Serbia urged to halt the anti-Kosovo-derecognition campaign. “I call on Serbia to stop this offensive and give up its destructive policies towards Kosovo and its statehood. Also, we call on relevant international factors, US and EU in particular, as facilitators of dialogue, to pressure Serbia to stop hostile policies towards Kosovo,” Prime Minister Albin Kurti wrote on his Facebook page. (Željko Trkanjec | EURACTIV.hr)