Prime Minister Mark Rutte has upped the ante in the Dutch campaign for the European Parliament elections, turning the vote into a two-way battle between his liberal-conservative VVD party and the far-right FvD, led by the controversial, ideologically extreme Thierry Baudet.

Behind this is Rutte’s wish to avoid a repeat of the provincial elections in March, when the FvD surprisingly ended up first, although polls predicted another win for the VVD.

It started with an announcement on 14 May where Rutte openly attacked Baudet, calling his theories and ideas such as Nexit bizarre and crazy, depicting him and his party as a threat to the country. He went on to challenge Baudet to a one on one debate.

Rutte also increased his media visibility for the campaign, overshadowing by far the VVD’s official campaign leader, Malik Azmani. The move was remarkable and in sharp contrast to the VVD’s campaign for the provincial elections of March, where Baudet or the FvD were barely mentioned.

Most Dutch media jumped at Rutte’s challenge to Baudet, and the latter’s picking up of the gauntlet through tactful social media messaging. 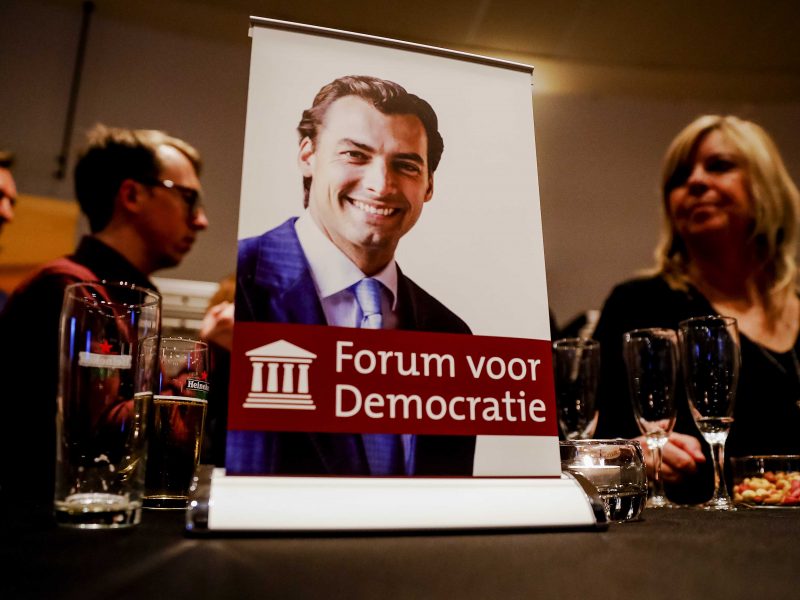 Discussions on the format, type and venue of the debate largely overshadowed campaigns of other political parties, including that of Frans Timmermans, the Spitzenkandidat for the EU’s social democrats.

Eventually, the opponents agreed to hold the debate on Wednesday (22 May), a day before the EP elections in the Netherlands. Most other EU states hold their EU elections between 24 and 26 May.

A recent poll suggests that a small share of voters could potentially switch allegiance and instead vote tactically for either the VVD or FvD. Any slight shift in support here could very well hand one of the two parties a symbolic but crucial victory.

The poll includes a projection based on 2014’s EP elections, predicting both parties could gain around 15% of the vote or five MEP seats each.

However, there are a few caveats, given that the traditionally low turnout in EP elections in the Netherlands (37% in 2014), has favoured the more pro-EU parties.  This does not really include the VVD, which had long been a soft Eurosceptic party, before Rutte’s recent more pro-EU turn, but he might still succeed in attracting those voters.

On the other hand, the gamble to hold the duel might backfire, as it could motivate more Eurosceptic voters to head to the ballot box.

In any case, the Dutch have in recent years warmed up to the EU, partly because of Brexit, and 84% of people now consider EU membership a good thing – the second highest after Luxembourg. On top of that, 86% of people indicated that they would vote to remain in the EU in case a referendum was held.

This is where the FvD’s position matters, but the party has been ambiguous in the past and has held different positions on the issue of Nexit, and there are some divisions in the party itself.

In general, they say they prefer to reform the EU from within, rather than follow the risky Brexit path. But they still want to hold a referendum on EU membership at some point.

Several pro-EU parties are trailing the FvD and VVD in the polls, including the social-democrat PvdA and Christian democrat CDA that could gain 13% of the vote each, or in 3-4 MEP seats each.  The Greens and Social Liberals could end up with two MEP seats each.

Some other Eurosceptic parties like the declining far-right PVV and socialist SP are expected to win a single MEP.  But overall, a victory of the more pro-EU camp is inevitable.

Consequences of the battle royale

If Nexit takes centre stage during the duel, Rutte could present himself as the responsible statesman compared to Baudet and, if successful, re-assert his VVD as the dominant political party.

However, by betting high on this duel, Rutte could also see himself and his party lose. More than that, he would be personally blamed for the loss, contrary to the provincial elections where he had largely stayed away. This could, in turn, have political consequences for him and provide additional momentum for the FvD.

One clear win will be a higher turnout. It was just 37% in 2014 but this year’s vote is expected to prompt more people, both Eurosceptic and pro-EU voters, to head to the ballot box.

Robert Steenland works as an evaluation and research consultant in EU policies, as well as an analyst in EU politics.