Trapped between the referendum and the rule of law debate, Romania risks losing its focus on European topics at an important moment for the future of the Union. [EURACTIV.com]

Romania is in a weird position. It is holding the EU Council presidency and at the same time feeling the heat of Article 7, the ‘nuclear option’, for its declining rule of law record.

It has no party with a clear anti-EU platform and it lacks the Eurosceptics, but the two parties from the ruling coalition, the socialists (PSD) and liberals (ALDE), both risk expulsion from their European families.

Although all major parties claim to be pro-European, most campaigns focus on slogans like “Romania deserves more”, ”We’ll give Romania back to Romanians” or ”Romania first”. But considering that the majority of Romanians are in favour of the EU, politicians are avoiding a direct attack on the EU itself and opt to slam ”the Brussels bureaucrats.”

Tensions between the coalition government and the EU institutions have escalated due to law changes enacted by Bucharest, which according to the EU executive weaken the anti-corruption fight and negatively affect the rule of law.

The latest spat took place right after the 9 May Sibiu summit, where EU leaders met to discuss the future of the Union and pledged to protect the rule of law and democracy.

Critics in Brussels say the Romanian government is breaking this promise.

In a letter to Romanian authorities, Vice President Frans Timmermans warned that the Commission would not hesitate to activate the rule of law procedure, due to the latest Criminal Code changes that “risk creating a situation of de facto impunity for crimes, including corruption crimes.”

The activation of the Article 7 procedure could result in the suspension of Romania’s voting rights at the EU level.

Things get even more complicated as Timmermans is the Spitzenkandidat of the European Socialists (PES), the family of Romania’s main ruling party, the PSD.

Last month, PES decided to freeze the PSD membership “until the Romanian government clarifies its commitment to the rule of law and follows the European Commission’s recommendations.” A final decision on PSD’s membership is due in June.

ALDE, PSD’s junior partner in the coalition, faces a similar situation. Guy Verhofstadt, the boss of the Alliance of Liberals and Democrats for Europe (ALDE), has urged the exclusion of its Romanian affiliate and namesake party from the liberal family.

“Sadly, the situation in Romania keeps regressing. The ALDE Group decided in early April to exclude ALDE Romania. We expect the ALDE Party to follow this decision and formally expel them from our movement, as soon as possible,” Verhofstadt tweeted in April.

If the groups turn their threats into reality, as no change of policy is expected from PSD leader Liviu Dragnea, Romania could find itself in a weird situation, which will most likely lead to the country’s further isolation in the EU.

With PSD and ALDE excluded, four of the five main parties will not be members of any EU political group and only the centre-right PNL will keep its position in the EPP.

Another recent political movement is PRO Romania, formed by former PM Victor Ponta and other dissidents from PSD, including current EU Commissioner for Regional Policy Corina Cretu, and Mihai Tudose, another former PM.

Ponta, Cretu and Tudose top the party slate for the elections, but only Cretu is expected to return to the European Parliament, while the other leaders were included to promote the party’s electoral list.

PRO Romania could become a member of PES, if PSD is excluded, but many decisions depend on the final outcome. Sources close to Ponta recently told EURACTIV that discussions have also been held with Macron. 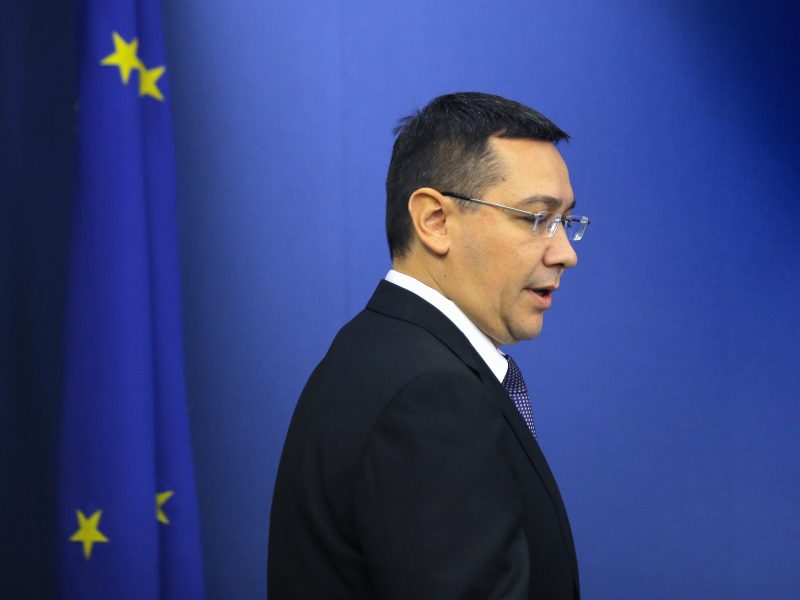 Romania’s former Prime Minister Victor Ponta is not planning to ally his new ProRomania party with the European Conservatives and Reformists (ECR) group, he told EURACTIV on Wednesday (22 May), insisting that his primary goal was to be with the EU’s Socialists and Democrats.

According to the latest polls, PSD and PNL are neck and neck, scoring around 26-27% each, followed by the Alliance of USR and PLUS with an estimated (20%). ALDE and PRO Romania could each get about 8-9%, according to an INSCOP poll.

There are also two EPP member parties: UDMR, the party of the Hungarian minority, which is closer to Fidesz than the general EPP stance on most EU topics, and PMP, the party of former president Traian Basescu, who leads its list. Both are expected to score around 5%, the minimum threshold, but it’s not certain if they will get a seat.

The main focus of the recent public debate has been the rule of law and judiciary independence.

This is why President Klaus Iohannis has called a referendum for the same day as the EU elections – to find out what the people think of the anti-corruption fight, but also of the PSD’s method of legislating through government decisions and not parliament-debated laws in the justice field.

However, the campaign for a referendum and the voting process – which includes setting three ballot boxes and a separate ballot for each of the two questions of the referendum – risks confusing the voters and diminishing the importance of EU topics in the debate.

Trapped between the referendum and the rule of law debate, Romania itself risks losing the focus on European topics at an important moment for the future of the Union, with Brexit and the next long-term budget on the table. Of particular concern is the potential linking of EU funds to compliance with rule of law, which might affect the country.