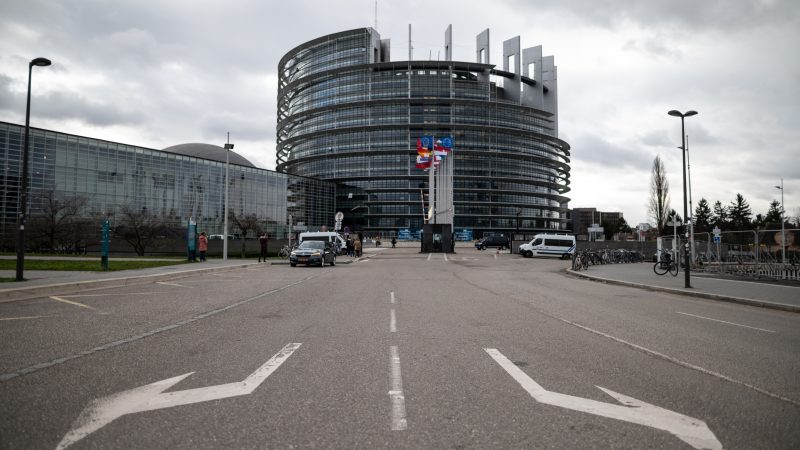 File photo. European countries' flags and the European Union flag fly in front of the 'Louise Weiss Building', the seat of the European Parliament, in Strasbourg, France, 11 February 2020. [EPA-EFE/PATRICK SEEGER]

The European Parliament is expected to return to its official seat in Strasbourg for a June plenary after an absence of more than a year due to Covid-19 restrictions, officials said on Wednesday (12 May).

Leaders of the legislature’s political groups and parliamentary speaker David Sassoli agreed to the move in a meeting, with the proviso that the plan be dropped if the coronavirus situation deteriorated.

The French government has been repeatedly prodding the parliament to go back to Strasbourg, a French city on the border with Germany that is its official home under EU treaties.

Before the pandemic, MEPs would trek from Brussels to Strasbourg once a month to hold a week-long session.

But the last time they did so was in February 2020. Since then, their sessions have been run out of the parliament’s chamber in Brussels, with most lawmakers connecting by videolink.

Paris was worried that the prolonged absence from Strasbourg would fuel an oft-raised demand by many MEPs to abandon Strasbourg and have all sessions in the Belgian capital, where most EU institutions are located.

A weekend launch in Strasbourg of an EU “Conference on the Future of Europe” designed to have the input of ordinary citizens underlined the ability of the city to safely host EU-level events.

The parliament’s monthly pilgrimage to the city is traditionally a significant source of income for local French businesses.

Article 341 of the Treaty on the Functioning of the European Union (TFEU) says that the seats of the EU institutions shall be determined by “common accord of the governments of the member states”. Protocol 6 to the EU treaties lays down that “Parliament shall have its seat in Strasbourg” where 12 periods of monthly plenary sessions shall be held.