Despite the recent measures by the EU to create a joint recovery fund, co-author Mark Leonard is not optimistic that this will create a long-lasting change in public opinion. [EPA-EFE | Olivier Hoslet/Pool]

A new poll conducted in nine member states details both widespread public disapproval of the EU’s coronavirus response and the need for greater cooperation. The report’s authors claim that these results mean the EU should frame its argument for further integration differently. EURACTIV Germany reports.

When lockdowns began to sweep across Europe, some believed that this crisis would renew public faith in government institutions and in particular, highlight the need for European cooperation.

Some have even gone as far as to speculate that this could lead to a European ‘Hamiltonian’ moment, a reference to the US founding father who initiated the mutualisation of state debt following the Revolutionary War.

However, new research from the European Council on Foreign Relations (ECFR) warns that this could be wishful thinking.

Conducted by Datapraxis and YouGov in the last week of April and first week of May, the survey of 11,000 people in 9 member states found that many Europeans, on average 46%, believe the EU has not lived up to its responsibilities in its coronavirus response.

In some countries, this dissatisfaction is particularly acute. 63% of Italians and 61% of French people polled disagreed that the EU fulfilled its duties. Furthermore, there was no country where a majority of respondents were satisfied. The highest level of approval came from Portugal at 36%. 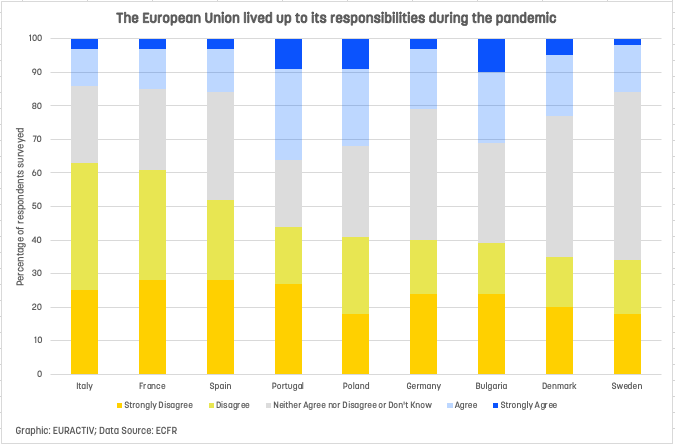 More than half of the Italians, Portuguese and Spaniards interviewed felt that the EU was not living up to its responsibilities.

What’s more, many respondents believed that the EU was ‘irrelevant’ during the crisis.

While the study was conducted before the EU’s push to create a joint recovery fund, ECFR director and one of the study’s co-authors Mark Leonard is not convinced that this will change opinions.

“Now is the moment when more hopes are attached to the EU response […], but if this hope is not satisfied soon, we could just as well see a backlash,” he said in a discussion with EURACTIV Germany.

However, despite this largely negative view of the bloc’s pandemic response, the majority of respondents claimed that the crisis showed the need for greater EU cooperation. In some countries, like Portugal, Spain, and Italy, more than three-quarters of those surveyed (90%, 81%, and 77% respectively) agreed with this statement.

Europe on its own

The authors, Leonard and Ivan Krastev, chair of the Centre for Liberal Studies in Sofia, assert that this is the product of people feeling that Europe is on its own in global crises.

In 7 of the 9 countries polled, the most respondents picked ‘no one’ over the EU, US, China, and the WHO when asked about their greatest ally during the coronavirus crisis. Many respondents also rated their views of both the US and China as having worsened.

The results are particularly stark for the US. While previous polling conducted in Germany by the Körber Foundation indicated that 73% of those surveyed had worse opinions of the US, this poll shows that to be the case across Europe with a total of 59% agreeing with this statement. ECFR finds this to be even worse in Denmark, Portugal and Germany with 71%, 70%, and 65% respectively. 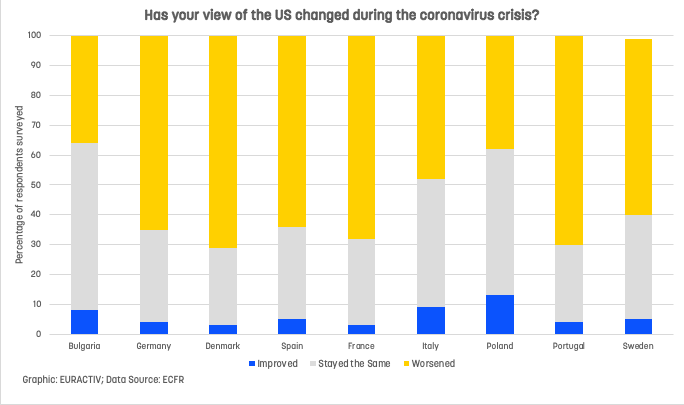 Some of the percentages in this report do not add up to 100 percent, such as Sweden here. ECFR has explained that this is due to rounding but refused to provide the poll’s metadata, following a request from EURACTIV Germany.

With the disillusionment and widespread disapproval of the EU’s handling of the pandemic, leaders should not mistake greater cooperation as an endorsement of the EU’s ideals or greater solidarity. Instead, “Europeans can see that failing to act together means they risk becoming casualties in a Sino-American game of chicken,” Leonard and Krastev argue in the report.

For this reason, they suggest formulating arguments for further integration in the language of national interest. They claim, “the roots of new demands for cooperation do not lie in an appetite for institution-building but rather in a deeper anxiety about losing control in a dangerous world. […] This is a Europe of necessity rather than of choice.”