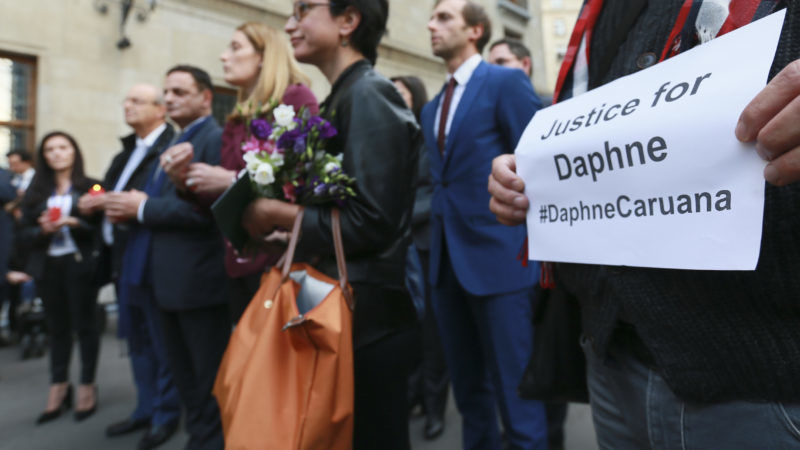 European journalists joined by EU commissioner during a silent vigil in memory of Maltese journalist Daphne Caruana Galizia in Brussels Belgium, 18 October 2017. Daphne Caruana Galizia, 53, was killed in a car bombing near Mosta , Malta on 16 October. She was known for her blog accusing top politicians of corruption. [Olivier Hoslet/EPA]

Investigators on the island are already being assisted by FBI officers and Dutch forensic police.

The move to involve the European Union’s Agency for Law Enforcement Cooperation, whose officers are expected to touch down before the end of the week, comes following pressure from the European Parliament.

For decades Daphne Caruana Galizia shined light on darkness, spoke the truth, answering only to her readers. Today we stand with her family. pic.twitter.com/mOiUxqy33w

The police provided few clues as to how the investigation was going, warning only that it was too early to speculate whether Semtex or TNT had been the explosive used.

Samples taken from the crime scene had been sent to foreign laboratories for testing, it said in a statement.

Teams were also working round the clock on tip-offs provided by the general public on the 16 October murder, which made headlines around the world.

The killing prompted much soul-searching on the island of 430,000 people over whether the country was becoming a cesspit of corruption against the backdrop of an economic boom in which organised crime and money-laundering have reportedly flourished.

On Thursday evening a group of female protesters set up camp in Malta’s historic Castille Square for a four-day sit-in to call for the country’s police chief and attorney general to be sacked.

“It is clear that we need to restore faith in the proper functioning of our institutions and democracy. For this to be done and to be seen to be done, our leaders need to act and quickly,” the group said in a statement.

“This is not the Malta we recognise. We want safety, protection, honesty, transparency,” it added.

The three sons of Caruana Galizia sent the protesters a pizza with bay leaves from their mother’s garden, explaining it was a symbol of “strength and courage”.

Addressing journalists, Maria Pisani from the Integra Foundation said the assassination had “exposed the worrying state of our nation” which had been brought about by the failure of government to recognise the importance of good governance and robust institutions.

“For too long has our nation been shackled by a culture of impunity, nepotism and the normalisation of abuse of power,” she said.

“It is time to hold our government, our political parties and our parliament to account,” she said.

The activists urged the government to make the necessary reforms for an effective separation of powers.

“We want safety, protection, honesty, transparency and integrity. We want our faith restored in our country, in our future, in our children’s future. And we want it to start now. At this rate, no political party can save us,” Pisani said.

The Civil Society Network said it also demanded the police chief and attorney general resign and was organising a march for Sunday.

Caruana Galizia, 53, had made repeated and detailed corruption allegations for years against Prime Minister Joseph Muscat’s inner circle and had recently turned her investigative scrutiny on the opposition as well.

After her death, her family accused Muscat of filling his office with crooks and creating a culture of impunity that turned Malta into a “mafia island”.

Malta Prime Minister Joseph Muscat swept back into power Sunday (4 June) after voters shrugged off corruption allegations against a Labour Party government which has presided over a booming economy.

With counting almost completed after Saturday’s early vote, Muscat, 43, was …