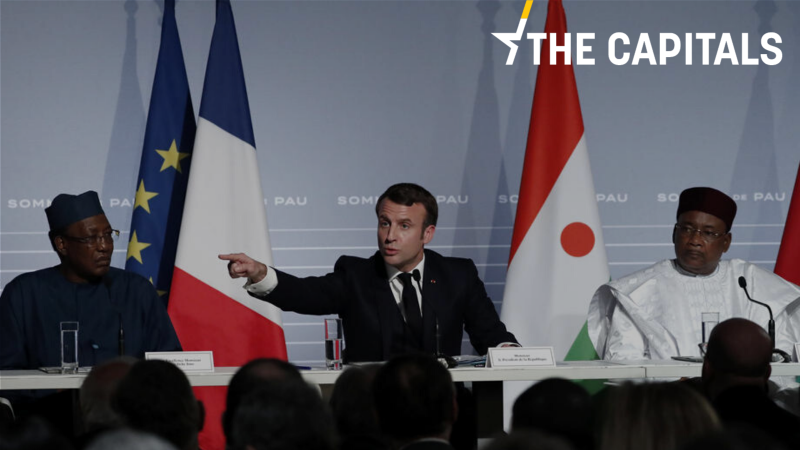 Although France continues to send troops to the region as part of the Barkhane operation, it is having trouble finding European allies such as Germany to be part of the Takuba task force. [EPA/GUILLAUME HORCAJUELO]

Before you start reading today’s edition of the Capitals, we invite you to read the EURACTIV network story “Athens metro advertises anti-abortion campaign“.

Also, feel free to have a look at the article “Separatist MEPs bring Catalan conflict to the heart of EU democracy“.

Where are the ‘EU friends’ in Sahel? In a meeting in Pau on Monday, the heads of state for the G5 Sahel (Mali, Burkina Faso, Niger, Chad and Mauritania) expressed their will to fight jihadist terror groups in the region and agreed to focus on the Tri border area under the joint command of Operation Barkhane, which has been in place since 2013.

Currently, there are 4,500 French soldiers in the region and President Macron will send another 220. But what about the other EU member states? EURACTIV France has the details.

No white smoke, again. With 233 days since the federal elections, the King has extended the mission of the coalition talks informants, Georges-Louis Bouchez (MR) and Joachim Coens (CD&V), until 28 January.

“The different parties must now be able to stabilise and occupy the same positions for a period slightly longer than just a few days,” Bouchez said.

Alexandra Brzozowski has the latest information.

Still no signing of UN Migration Compact. In 2018, Austria (then led by the right-wing ÖVP/FPÖ coalition declared it would not sign the UN migration compact to prevent the creation of a “human right to migration”, according to the FPÖ vice-chancellor of the time, Heinz-Christian Strache.

But now that the Greens, who had supported the UN migration compact, have replaced the scandal-ridden FPÖ in the ruling coalition, one would think that it would sign the intergovernmental agreement. However, foreign minister Alexander Schallenberg, well aware of such expectations, made it clear that Austria will stick to its former position. (Philipp Grüll | EURACTIV.de)

“Project-oriented” cooperation in Thuringia? After months of political deadlock, the state of Thuringia could see the forming of a governing coalition as the call to create a “project government” with the state’s previous governing coalition of Social Democrats (SPD), Greens and the Left, was made by former Minister-President Dieter Althaus of the Christian Democrats (CDU).

Coalition-building has been ongoing in Thuringia since no majority was reached in the state elections at the end of October 2019. Partly due to the rise of the Alternative for Germany (AfD), the previous governing coalition lost its majority, meaning these parties had to look for other partners, such as the Christian Democratic Union (CDU) and the liberal Free Democrats (FDP).

But will all conservatives support such collaboration, particularly as it would have to collaborate with the leftist party, Die Linke? EURACTIV Germany’s Sarah Lawton delves into the matter.

EURACTIV’s Samuel Stolton reports on who holds responsibility when implementing the Irish backstop (formally known as the Northern Ireland Protocol).

New UK farming bill guarantees subsidies for 2020. The UK government has introduced new legislation which ensures that farming subsidies will continue to be paid to UK farmers for 2020.

Natasha Foote has the story.

>>Read also: How the UK could be taken to the ECJ over Brexit

A new case of brain fever. Italy has seen its sixth case of meningitis within the last month and a half, this time on the outskirts of Bergamo, in the Lombardy region. The patient, hospitalised but not in a life-threatening condition, is the husband of a 48-year-old woman who died of brain fever just ten days ago. Although local authorities confirmed there is no outbreak, the news led people to buy out and deplete entire stocks of vaccines in the area. (Gerardo Fortuna | EURACTIV.com)

Work starts. The new government led by socialist Prime Minister Pedro Sánchez will hold its first cabinet meeting on Tuesday (14 January). One of the first measures that the socialist and left-wing coalition is expected to adopt is a pay rise for pensioners in line with inflation.

But Sánchez’s minority government will have a hard time passing a new budget and major reforms. In a portent of the likely troubles ahead, opposition parties and public prosecutors criticised his appointment of his former justice minister, Dolores Delgado, as the new chief public prosecutor. They said that this nomination would jeopardise the independence of the judiciary. (Jorge Valero | EURACTIV.com)

The US supports energy projects in Greece. Greece is moving forward in the energy sector and has a crucial role to play in Europe’s energy security, the US Ambassador to Athens told journalists. He praised the progress on specific projects of US interest and support like TAP and IGB pipelines, the Alexandroupolis FSRU, the Revithoussa LNG terminal and the EastMed pipeline agreed a few days ago. (Theodore Karaoulanis | EURACTIV.gr)

Kuciak´s murder trial begins. The trial in the murder case of journalist Ján Kuciak and his fiancée Martina Kušnírová started in the city of Pezinok on Monday (13 January). Controversial businessman Marián Kočner has been charged with ordering the double murder, while four others face charges for murder or for acting as intermediaries.

The man accused of shooting Kuciak and Kušnírová in their home pleaded guilty yesterday, while one of the middlemen has cooperated with the police and has already closed a plea bargain with the sentence of 15 years. Kočner has pleaded not guilty. (Zuzana Gabrižová | EURACTIV.sk)

Share of renewables expected to rise, but it’s not enough. The share of renewable sources in the Czech Republic’s total energy consumption will grow to 22% by 2030 under the energy and climate plan required by the EU and approved by the government yesterday (13 January).

However, last year, the EU said that the country’s goal for 2030 should be at least 23%, while the country’s Chamber of Renewable Sources stated on Monday that representatives of clean energy, environmentalist organisations and municipalities had demanded a minimum increase of at least 24.4%. (Ondřej Plevák | EURACTIV.cz)

In his presentation of the strategy, Innovation and Technology Minister László Palkovics stressed that the document contains specific measures to achieve this goal, including Hungary’s pledge to ensure that 90% of its electricity production is carbon-free by 2050 by aiming to keep consumers’ energy and utility costs to a minimum while encouraging them to improve their energy efficiency and use their energy sources wisely. (Željko Trkanjec | EURACTIV.hr)

For the 28th time, the Great Orchestra of Christmas Charity (WOŚP), a Polish charity, is on track to raise around 200 million zlotys (€46 million) to fund hospital equipment for little children, and will likely top last year’s record of 175 million zlotys. As Poland’s biggest fundraiser, it hosts a series of concerts and welcomes the participation of politicians and celebrities, as well as volunteers who are dedicated to collect funds across the country. (Łukasz Gadzała | EURACTIV.pl)

EU export growth. Bulgarian exports to the EU grew by 3.4% from January to October 2019 period, compared to the same period of 2018, the National Statistical Institute said on  Monday (13 January), with Germany, Romania, Italy, Greece, France and Belgium as the country’s main trading partners (66.2% of its total exports).

But what about the country’s imports? EURACTIV Bulgaria’s Krassen Nikolov provides you with more statistics.

Belgrade’s prioritises European integration and Kosovo. Serbia’s main foreign policy priority is to obtain full EU membership, Foreign Minister Ivica Dačić said, adding that countries which had opened over half the negotiating chapters, like Serbia, “should know the dynamics of the process and have clear political support.” Dačić also said he hoped that Belgrade and Pristina would resume dialogue. (EURACTIV.rs)

But his apology on Monday wasn’t enough for his right-wing political opponent who accused the leftist of having extremist ideas.

Meanwhile, Davor Bernardić, president of the Social Democratic Party (SDP), a coalition partner with HSS, announced he was running to become the country’s next prime minister while calling for the early parliamentary elections in which his party will lead the fight against fascism and corruption.

Despite making those statements, Janša is not interested in calling for snap elections, while  Matej Tonin, the leader of another opposition party, NSi (EPP), confirmed that talks between coalition and opposition parties are ongoing. Things should become more clear by Sunday when DeSUS(RE)’s party congress takes place. (Željko Trkanjec | EURACTIV.hr)

Sarajevo officially the world’s most polluted city, again. According to Air Visuals from Saturday morning (10 January), Sarajevo was once again the world’s most polluted city, after it held the position in December. The situation has become so critical that doctors and specialists recommend people wear specialised protective masks with filters, or do not go outdoors at all, especially pregnant women, children, the elderly and chronically ill patients. (Željko Trkanjec | EURACTIV.hr)

Two journalists arrested after publishing ‘fake news’. Late on Sunday (12 January) evening, the Montenegrin police arrested two journalists of pro-Serb news websites, Gojko Raičević and Dražen Živković. The two editors of the in4.net and borba.me were taken into custody for inducing panic in a public space because they had published information about an explosion in Vila Gorica Palace, in which senior state officials, including Montenegrin President Milo Đukanović, organise receptions for distinguished guests.

But have there been other so-called ‘fake news’ cases? EURACTIV Croatia‘s Željko Trkanjec digs deeper.