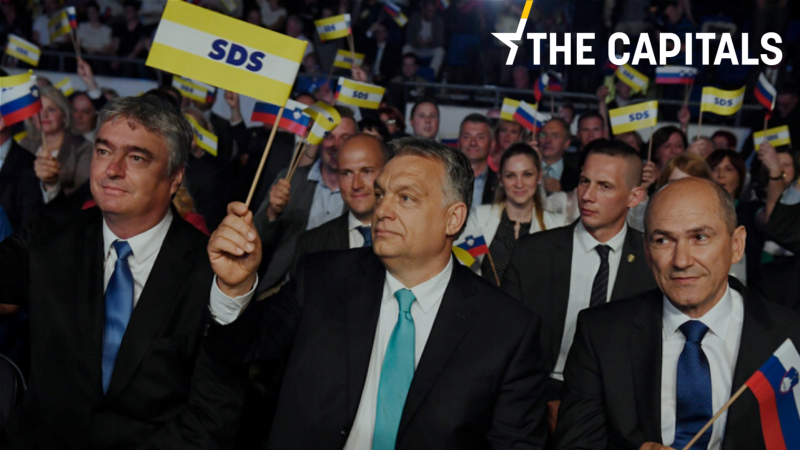 “Punishing the most successful party in the group would not make any sense,” Janša said at the EPP Congress in Zagreb. [EPA/HUNGARY OUT]

Before you start reading today’s edition of the Capitals, feel free to have a look at a study which found that “No EU country has calculated transport decarbonisation costs” as well as the Policy Brief of Benjamin Fox “European Political Parties and Foundations: The ’tissue’ that connects?”. Also, have a look at “NATO braces for the new space age“, as well as “Italy’s young farmers networking for making revenues“, which is part of the special on “Generational renewal in agriculture“, which has been translated into seven languages.

“Punishing the most successful party in the group would not make any sense,” Janša said at the EPP Congress in Zagreb.

The right-wing former PM believes that Fidesz will remain in the EPP after the thorough investigation that is currently being conducted. The membership of Orbán’s Fidesz party in the EPP was temporarily suspended before the EU elections due to alleged violations of the rule of law.

“Thank you for the honour, this is a big moment for me,” said Tusk, who is going to replace France’s Joseph Daul, who led the group since 2013. Orbán’s future in Tusk’s EPP is unclear considering that the Polish politician is not in line with Fidesz’s ultra-right-wing beliefs.

However, the newly elected Mayor of Budapest Gergely Karácsony recently told EURACTIV that following the Budapest electoral defeat, the ruling Fidesz party would probably seek a more constructive way of doing politics. He added that the EPP does not want to “lose more numbers” and he, therefore, predicted that Fidesz would remain in the EPP.

Read also: British MEP: Orban is not an extremist, would be ‘interesting’ to have him in ECR

Blocking Croatia is not in Slovenia’s interest. Janša also said that Croatia Schengen accession is in Slovenia’s interest. “This is not only my position but also the position of Slovenian citizens,” Janša said. Asked about the expectations of Croatia’s EU presidency, Janša said that “the added value of our term should be enhancing the dialogue between the Western Balkans and EU regarding enlargement”.

Deadly attack on the son of Germany’s former President. Berlin reacted with horror to the deadly attack on the son of former Federal President Richard von Weizsäcker. On Tuesday  (19 November) evening, Berlin chief physician Fritz von Weizsäcker, who has been the head physician of the Department of Internal Medicine at the Schlosspark-Klinik in Berlin-Charlottenburg since 2005, was stabbed to death when giving a lecture.

The police are not aware of the motive of the alleged attacker. The murder comes at a time when the country is experiencing an increase in verbal and physical attacks on political figures in Germany.  (Claire Stam | EURACTIV.de)

Read also: Does Germany depend too much on China?

The ongoing efforts by Spain’s caretaker prime minister, Pedro Sánchez, to form a government following his inconclusive victory at the 10 November election could be further complicated by the political fallout from a sweeping corruption case affecting his Socialist Party (PSOE). Read the full story on El País

French budget in trouble. For the European Commission, the French budget for 2020 presents a “risk of non-compliance” with EU rules. According to Brussels, the budgets presented by France but also other countries (Italy, Slovenia, Slovakia, Finland, Spain, Portugal and Belgium) – are likely to deviate from the objectives set for them.

According to the executive, the French budget deficit will reach 2.2% of the GDP in 2020 and 2021, but the structural effort – i.e. the effort made without taking into account the economic situation – remains too low.  France also suffers from a public debt that is “too high” (98.9% of GDP next year, and even 99.2% in 2021.) and has failed to reduce it during the last years.

Similar situation in Belgium. If the government policy fails to change – and change is unlikely as long as the country is governed by a caretaker administration – the deficit is projected to rise to 2.3% next year and 2.6% in 2021. The Commission said it expects Brussels to provide a comprehensive national draft budget plan “as soon as the new government has been formed”. Meanwhile, the Brussels government has underestimated the regional budget deficit for 2018 by €312.7 million. “By now, we scratch at the bottom edge. If there is no government soon, we will get serious problems,” a conservative party source admitted.

The Commission found the Slovak budget plan for 2020 to be at risk of not complying with the Stability and Growth Pact, for the very first time since 2014. The Slovak government expects a budget deficit of around 0.5% while the Commission predicts it could widen to 0.9%. Although Slovakia complies with the deficit limit of 3% of GDP and debt limit of 60% of GDP, it moves away from the path towards the medium-term objective for both 2020 and 2019.

The Ministry of finance admitted that such conclusions had been highly expected. “However, public finances in Slovakia are still sound. If lawmakers in the Slovak parliament don’t show more of their ‘pre-election creativity’, next year’s budget will reach 0.49%,” Slovak Finance Minister Ladislav Kamenický said highlighting a series of legislative proposals concerning expenditure measures before parliamentary elections, which will take place at the end of February 2020.

Regarding Romania, the Commission said it had taken no action to correct its budgetary imbalance, in response to the Council recommendations in June 2019. The Commission projects that Romania’s budget deficit will balloon to 3.6% of GDP this year and 4.4% of GDP in 2020, above the 3% maximum threshold. As a consequence, the EU executive proposes that the Council adopts a decision on non-effective action and a revised recommendation to Romania to take measures to ensure a significantly slower growth of the government expenditure that would allow the correction of its significant deviation from the adjustment path towards the medium-term budgetary objective.

Trouble coming for Fiat. US car manufacturer General Motors (GM) said the Italo-American Fiat Chrysler Auto (FCA) enjoyed unfair business advantage through “millions of dollars in bribes” paid to the United Auto Workers union. In a lawsuit filed in Detroit’s district court, GM has alleged that Fiat’s late CEO, Sergio Marchionne, was at the core of the racketeering scheme.

FCA management was “surprised” by GM’s legal action: “We can only assume it is to stop our merge proposal with Peugeot (PSA),” said the company in a statement. But FCA’s share price crashed in Wall Street after the announcement of the lawsuit. (Gerardo Fortuna | EURACTIV.com)

‘No’ to constitutional change. PM Mateusz Morawiecki has proposed to change the Constitution in order to protect funds transferred to Employee Capital Plans (PPK) and Individual Pension Accounts (IKE).

“Citizens must regain confidence in the state pension system after the reform of Open Pension Funds. We understand their distrust toward the system […] Let’s change the Constitution to guarantee the protection of funds collected under PPK and IKE,” he said.

However, all opposition parties opposed these changes.

Grzegorz Schetyna, Civic Platform (PO/EPP) leader said that putting PPK into the constitution is a joke, while Sejm Deputy Marshal Małgorzata Kidawa-Błońska said she was afraid of such solutions. “Whenever I hear someone willing not to improve the law in our country, but to change the constitution for a specific solution, I’m always afraid of it,” she said.

Leftist MP Adrian Zandberg said the Left (Lewica/S&D) would never agree to include banking sector’s privileges in the Polish Constitution. Law and Justice deputy spokesman Radosław Fogiel reacted, saying that if “the opposition does not agree to amend the constitution, it means that it has other plans for the funds collected by Poles”. (Mateusz Kucharczyk | EURACTIV.pl)

Mission leaders. The Czech Republic will command the EU training mission in Mali next year for a period of six months. The task of the Czech military will be to train their Malian counterparts who are fighting against Islamist radicals. Currently, there are 120 Czech soldiers in Mali, and the mission will not require to increase the number.

More reforms needed. While Bulgaria consistently meets the macroeconomic requirements to become part of ERM II, the authorities should remain committed to crucial structural reforms needed to achieve this goal, according to a report of the European Bank for Reconstruction and Development.

Bulgaria should also continue working on the implementation of the commitments within the framework of the EU’s Cooperation and Verification Mechanism (CVM). According to the latest CVM report, the European Commission considers that the progress made by Bulgaria under the mechanism is sufficient to meet the country’s commitments made at the time of its accession to the EU. Reforms on improving the business environment need to be implemented. (Dnevnik.bg)

EU and Serbia agree on border cooperation. The EU and Serbia signed an agreement on cooperation in border management, the European Commission said. The deal aims at solving the illegal migration and cross-border crime and includes the possible technical and operational help on borders. EU Commissioner for Migration Dimitris Avramopoulos said the agreement is in the interest of both Serbia and the EU. The agreement deal will be put in force after approved by the European Parliament. (EURACTIV.rs)