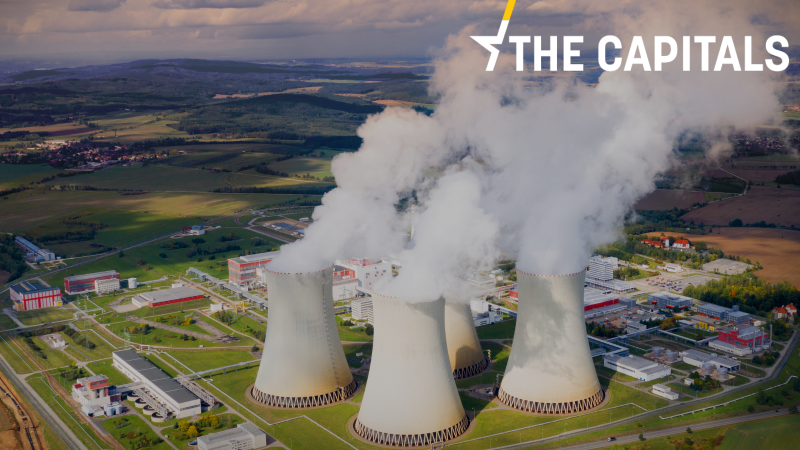 As Czechia looks to decarbonise its coal-based economy, it sees nuclear energy as the backbone of its future energy mix. [Shutterstock / Kletr]

As Czechia looks to decarbonise its coal-based economy, it sees nuclear energy as the backbone of its future energy mix. The Czech government plans to build a new nuclear power plant unit that is expected to be operational in 2036. Still, experts warn of delays and high costs, already observed in Slovakia or Hungary. Read more.

French women still earn 16.5% less than men. Wednesday (3 November) marks the day French women would start working for free until the end of the year, while their male counterparts continue receiving full pay. This is because women still earn 16.5% less than men, according to Les Glorieuses, a newsletter published by French economist Rebecca Amsellem. Read more.

Mask up, MPs told. MPs have been told they must wear face masks in Parliament after a recent spike in COVID-19 cases there. Last week, face mask-wearing was made compulsory for all other workers in the Parliament buildings. Read more.

Ireland joins Global Methane Pledge signatories. Ireland will join the nearly 90 countries that have signed up to a US-EU-led initiative to cut methane emissions by 30% of 2020 levels by 2030. Read more.

Estonia wants closer ties with other Baltic states, Nordics. Estonia’s government has approved a proposal for enhanced relations with Nordic and other Baltic countries, meaning there is progress, at least on paper, towards a more coherent northern European block. Read more.

Italian government considers extending state of emergency into the first half of 2022. In an interview on national TV Rai3, Italian Health Minister Roberto Speranza opened up the possibility of extending the current state of emergency that was first introduced on 31 January 2020 and is currently set to expire on 31 December. Read more.

Portuguese president to hear advisors before decision to dissolve parliament. It will be essential to listen to the opinions of state advisers on dissolving parliament, President Marcelo Rebelo de Sousa said on Tuesday, stressing that the date for the elections would be announced later. Read more.

Death of pregnant woman sparks new protests over abortion law. Protests were held across the country on All Saints’ Day Monday following the death of a 30-year-old woman who died in a hospital in Pszczyna while 22 weeks pregnant. Doctors were told to hold off on removing the foetus until the baby’s heart stopped beating, but the woman died of septic shock. Read more.

US and Romania to build nuclear power facility. The United States and Romania on Tuesday (2 November) announced plans to build a “first-of-a-kind” small modular reactor (SMR) plant in Romania. Deployment of SMR technology will be an essential contributor to a decarbonised power sector and net-zero future, the White House said. Read more.

Croatian defence minister wants to remove president from office. Asked if it was time President Zoran Milanović was removed from office, Defence Minister Mario Banožić (HDZ-EPP) said: “Of course it is. It was a long time ago, but look at his conduct. Would you reach a different conclusion than what I said?”. Read more.

Vucic: Republika Srpska is honouring Dayton agreement. Serbian President Aleksandar Vučić said on Tuesday (2 November) that he had not yet read the report High Representative for Bosnia and Herzegovina Christian Schmidt prepared for the UN Security Council, but that it appeared to him that that the main accusations are against the Republika Srpska, even though Republika Srpska was honouring the Dayton Accords. Read more.

UN Security Council postpones discussion on BiH because of Russia and China. The session of the UN Security Council on the situation in BiH initially set for Tuesday (2 November) has been postponed to an unconfirmed date, according to unofficial sources. Read more.

North Macedonia’s Deputy PM could become the new premier. Deputy Prime Minister Nikola Dimitrov could replace Zoran Zaev as head of the government after Zaev announced that he would resign in light of his party’s defeat in local elections, the Frankfurter Allgemeine Zeitung reports.

The paper reports that this is one of the three options – the other two being that Zaev reneges on his pledge to resign, or a new ruling majority led by VMRO-DPMNE is created with Hristijan Mickoski as Prime Minister.

Open Balkan initiative could go ahead without North Macedonia. Albanian Prime Minister Edi Rama and Serbian President Aleksander Vucic confirmed they will meet in Belgrade on Wednesday (3 November) to discuss the Open Balkan initiative, likened to a Balkan mini-Schengen.

The initiative included North Macedonia but following the resignation of Prime Minister Zoran Zaev, it is uncertain whether they will continue to be involved. Rama confirmed that the meeting would go ahead and that another official would represent North Macedonia.

Montenegro, Kosovo, and Bosnia and Herzegovina have refused to join over fears the initiative would risk the region’s EU aspirations. (EURACTIV.com)