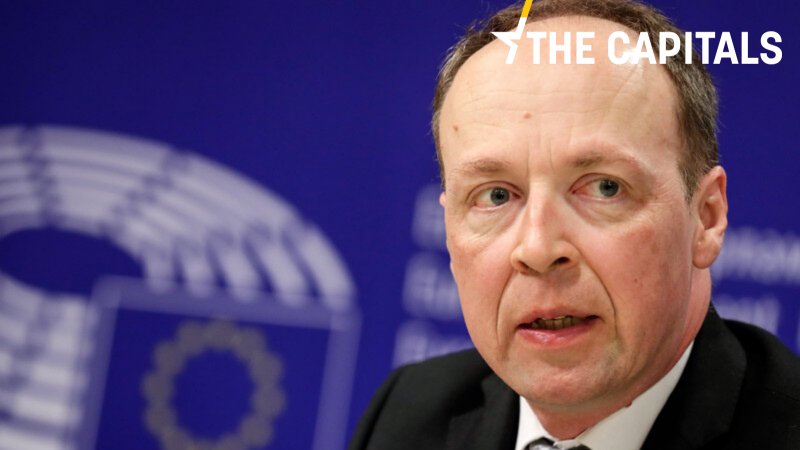 The country's five-party government led by Prime Minister Sanna Marin (SDP) should immediately start preparations for Finland to leave the eurozone, according to Jussi Halla-Aho, a vocal EU critic and chair of the populist Finns Party, currently in opposition. [EPA-EFE/STEPHANIE LECOCQ]

Before you start reading today’s edition of the Capitals, feel free to have a look at the exclusive op-ed by Commission VP Frans Timmermans and the International Energy Agency’s executive director, Fatih Birol.

Also read the article Parliament refuses apology for suspended Greek officials  by Sarantis Michalopoulos and have a look at Alexandra Brzozowski’s piece on US withdrawal from Open Skies Treaty takes European allies by surprise.

Now that many European countries have started lifting lockdown measures and opening borders, make sure you stay up to date with EURACTIV’s comprehensive overview, which is regularly updated with the help of our network of offices and media partners. Also, check our country update pages, such as the one for France and Romania.

Flawed masks recalled from member states. “Around 1.5 million masks, which have been distributed are not appropriate for use. These masks have been tested in four member states and the results are negative,” according to an internal e-mail by the EU Health Security Committee (HSC), seen by EURACTIV. Alexandra Brzozowski has more details.

Lufthansa gets €9 billion government bailout. German airline Lufthansa will receive €9 billion in state aid after lengthy negotiations concluded within Germany’s grand coalition. In exchange, the government will take over 20% of the company’s shares and appoint two members to the company’s supervisory board. EURACTIV Germany’s Sarah Lawton looks into the settlement.

Meanwhile, Austrian Airlines is to save €300 million. While negotiations on a possible bailout between the Lufthansa-owned Austrian Airlines (AUA) and the Austrian government are still ongoing, AUA has already announced it would be saving €300 million, mostly by cutting staff salaries. Workers’ representatives agreed to the cuts on Thursday (21 May).

“These measures allow us to keep as many employees as possible through the crisis”, wrote AUA-COO Jens Ritter in a statement. (Philipp Grüll | EURACTIV.de)

A premium for thermal cars. A new vehicle purchase incentive programme to help the automotive sector is meant to be announced by the French government as early as next Monday (25 May). But the announcement is set to be controversial. EURACTIV France takes a closer look.

Johnson U-turns on health surcharge. Boris Johnson’s government performed a surprise U-turn, scrapping the fee that non-EU migrants must pay to use the National Health Service (NHS) if they work for the NHS or as care workers. The move came just a day after Johnson staunchly defended the surcharge, which raises £900 million per year, following demands by Labour leader Sir Keir Starmer for it to be abolished. Benjamin Fox has the story.

Number discrepancy. Italy recorded 47,000 more deaths in March and April this year than in 2019, social security and retirement institute INPS said on Thursday (21 May). By comparison, the number of COVID-19-related deaths officially recognised by the country’s Civil Protection Department amounts to about 28,000, most of which are in the North, according to an INPS study  “Analysis of Mortality in the COVID-19 Epidemic”. EURACTIV Italy’s Valentina Iorio looks into the discrepancy.

“Resistance of ‘frugal four’ needs to be overcome.” Portugal’s Prime Minister says it is essential to “overcome the resistance” of four of the 27 EU member states that are trying to halt progress in the EU, warning that either all countries will emerge from the current crisis or nobody will. Commenting on the Franco-German plan to create a €500 billion European recovery fund based on subsidies, Costa considered it to be an excellent proposal but warned that important aspects were missing. (Pedro Morais Fonseca | Lusa.pt)

State aid without a say? Greek airlines Aegean has asked for state aid to help cope with the economic implications of the pandemic, but it doesn’t want any state aid to be tied to the Greek state taking a stake in the company. Sarantis Michalopoulos has the details.

Pre-election polls. With one month to go before the country’s planned presidential election (28 June), incumbent President Andrzej Duda is leading with 39% in the latest poll conducted by Kantar.

While Duda is now scoring less than in previous polls, when he had been polling over 40%, Warsaw’s liberal mayor and race newcomer, Rafał Trzaskowski, and centrist Szymon Hołownia are still way behind with 18% and 15% respectively. (Łukasz Gadzała | EURACTIV.pl)

Hungary to accept ECJ ruling. While the government does not agree with last week’s European Court of Justice ruling that holding migrants and asylum seekers in a transit zone amounts to detention, it is bound by the decision and has no choice but to close these zones, Minister of the PM’s Office, Gergely Gulyás, said.

Gulyás said that the 280 asylum seekers who have been detained in the transit zones have been transferred to an asylum reception centre. He added that the government intends to introduce legislation that will mandate that those looking to request asylum in Hungary will only be able to do so at Hungarian delegations abroad. (Vlagyiszlav Makszimov | EURACTIV.com)

Half-hearted steps on renewables. Czechia may lose EU funding for new renewable energy sources if it does not adopt an active approach, Modern Energy Union, Solar Association and Alliance for Energy Self-Sufficiency representatives said on Thursday (21 May).

Support for renewables, building renovation and clean mobility are the main points of Europe’s draft ‘green recovery’ plan for boosting the economy after the coronavirus pandemic, they said. According to the associations, the Czech government has taken half-hearted steps in the area, and some of them endanger upcoming projects.

World Bank loan agreements. Croatia’s government decided to initiate the signing of two loan agreements with the World Bank, one worth €200 million for post-earthquake reconstruction and a stronger COVID-19 response, and another worth €275.9 million for broader crisis response and recovery support. Read more.

In other news, the government announced its support for the €500 billion recovery programme proposed on Monday (18 May) by French President Emmanuel Macron and German Chancellor Angela Merkel, Jutarnji List daily reports. The government proposed that the money obtained from the fund could be used to help the tourism and transport sectors get back on their feet, as the country gears up to open its borders for Slovak, Czech, Hungarian and Austrian citizens as of 29 May, Tourism Minister Gari Cappelli said on Wednesday. (Karla Junicic, EURACTIV.hr)

Airbnb and Booking to face competition… from the state. Bulgaria will cooperate with some private companies to create “Rediscover Bulgaria”, a platform for tourist booking reservations, economy, agriculture and tourism ministers announced on Thursday (21 May). EURACTIV Bulgaria’s Krassen Nikolov looks at what the platform has to offer, especially as most holidays in Bulgaria are currently booked via phone, Booking.com or Airbnb.

State health insurance in trouble. Health insurance fund ZZZS, which manages mandatory health insurance, expects to post a €129 million loss this year because of COVID-19. The fund wants the loss to be covered from the state budget, either through a budget reshuffle or an interim law, otherwise, there is a risk that healthcare funding could be suspended in December.

In other news, the Celje High Court rejected PM Janez Janša’s appeal regarding the payment of €6,000 compensation to RTV Slovenia journalist Evgenija Carl for an offensive tweet from March 2016. Janša, then leader of the opposition SDS (EPP), posted on Twitter that “on some FB pages, brothels are offering cheap services of retired prostitutes Evgenija C. and Mojca PŠ. One for 30 euros, the other for 35 euros.”

The court found it to be a “gross, personally offensive attack on the plaintiff that…could only cripple legitimate journalistic work”. (Zoran Radosavljević | EURACTIV.com)

Ministry buys 2.5 tons of razor-wire to fence off migrant centres. Serbia’s defence ministry is purchasing almost 2.5 tons of razor-wire to constructing fences around migrant reception centres and accommodation centres for asylum seekers, according to the invitation for public procurement procedure listed on the ministry’s website, Radio Free Europe (RFE) reported on Wednesday (20 May). But there’s more.

In other news, Serbian flag carrier Air Serbia has started to gradually resume its commercial flights from Belgrade’s Nikola Tesla Airport from 21 May. Flights to Zurich and Frankfurt will take off first, while flights to London, Amsterdam and Paris are set to restart soon, while regional destinations will also follow.

Air Serbia had previously said it would respect all anti-pandemic procedures ‘before, during and after flights,’ including the mandatory wearing of face masks. Read more.