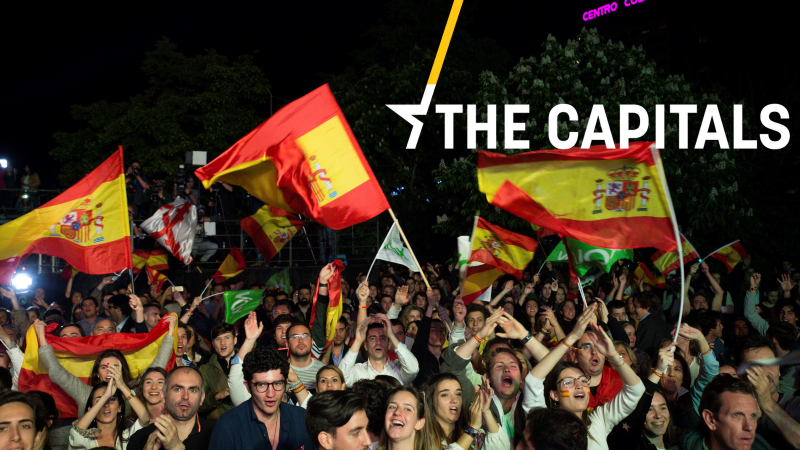 The Capitals is EURACTIV's daily newsletter from across Europe. [EPA/Luca Piergiovanni]

Spain’s far-right key in mayors’ election. A number of party deals helped on Saturday the formation of more than 8,000 city councils in Spain. In many cases, mayors were elected thanks to pacts with far-right Vox, who became a key player to facilitate them, EURACTIV’s partner EFE reported.

That was the case in Madrid, where the conservative Popular Party (PP) regained the mayor’s office after four years of leftist rule, thanks to a pact with the liberals of Ciudadanos (Citizens, C’s) and the support of Vox.

Jose Luis Martinez-Almeida, the PP main candidate in the municipal (and EU) elections in May, is as from last Saturday the new mayor of the Spanish capital, thanks to a complex “two-way” pact forged after complicated negotiations with C’s and Vox. (EuroEFE.EURACTIV)

Meanwhile, the Spanish Supreme Court has denied the leader of the Catalan Republican Left (ERC), Oriol Junqueras, permission to leave prison to attend a ceremony at the National Electoral Commission (JEC) on 17 June, where he would be sworn in as a member of the EU Parliament, El Pais reported.

Johnson no-show. In the first of several televised debates, five of the six candidates to be the next UK prime minister took part in a heated debate on Sunday evening.

The current frontrunner to get the nod as PM, Boris Johnson, decided to shun the event, facing the ire of some of the other candidates, including Foreign Secretary Jeremy Hunt. Referring to the UK’s negotiations with the EU as part of the Brexit talks, he said: “If his team won’t allow him out to debate five friendly colleagues, how is he going to fare with 27 EU countries?” (Samuel Stolton, EURACTIV.com)

“It’s no!” In Belgium’s government formation talks, Elio Di Rupo, leader of the French-speaking Parti Socialiste (PS), ruled out any cooperation with Flemish nationalists. “We must do everything to govern without the N-VA but with the four other parties in Flanders that represent about 50% of the population of Flanders,” Di Rupo said.

“We will fight to the end so that there is a coalition without the N-VA,” he added. Di Rupo also suggested a controversial transition solution to expand the outgoing federal minority government to the Socialist and Greens for a one-year emergency government to avoid a long political crisis. (Alexandra Brzozowski, EURACTIV.com)

Right-wing terrorism? A member of the right-wing extremist community has been arrested following the murder of Kassel District President Walter Lübcke, the Frankfurter Allgemeine Zeitung reported on 16 June. Lübcke, a 65-year-old prominent local politician and CDU member, was an open supporter for the integration of refugees in Germany. He was found shot dead in the head on 3 June sending a shockwave across the country, which is set to intensify should it be proven that the perpetrator has a connection with the right-wing extremist community.

Climate neutrality. Germany now officially backs the EU’s climate neutrality objective by 2050, according to leaked documents. Now member states number at least 18, it increases the possibility that the EU Council will support the climate objective later this week. This will, in turn, give the bloc climate leadership ahead of a crucial UN summit in New York in September.

EU mobster. Alberto Bagnai, chair of the finance committee in the Italian Senate, said in a TV interview the EU was looking for an “incident” with Italy and has adopted a “mafia-style” attitude toward Rome by blackmailing.

Bagnai is a known Eurosceptic from Italy’s right-wing Lega and rumours suggest that he could be the next EU affairs minister, a post that is currently vacant, or even replace economy minister Giovanni Tria in case of a cabinet reshuffle. (Gerardo Fortuna, EURACTIV.com)

Tensions escalate with Ankara. Greece and Cyprus have decided to ask the EU Council on Thursday to impose sanctions on Turkey if it proceeds with drill activities in the Cypriot Exclusive Economic Zone.

Following an extraordinary national Security Council meeting, in which Cypriot President Nikos Anastasiadis also took part by phone, Greek PM Alexis Tsipras said whoever violates Greece and Cyprus’ sovereign rights, as well as the international law in the region “should know that there will be sanctions”. The EU, particularly France, and the US have firmly warned Ankara against such activities in the region. (EURACTIV’s partner Athens-Macedonia News Agency)

Presidential candidates? Although the presidential elections are due in 2020, potential names of opposition candidates have already started popping up. Donald Tusk is expected to come back to run against right-wing incumbent Andrzej Duda, but opinion polls do not give him a clear indication that he can win.

Therefore, according to Onet.pl, some other names have entered the debate: Rafał Trzaskowski, Warsaw’s mayor; Hanna Zdanowska, mayor of Łódź, the third-largest city in Poland; and Bartosz Arłukowicz, former minister of health, and a newly-elected MEP. (Łukasz Gadzała, EURACTIV.pl)

New president sworn in. Slovakia’s first female president, Zuzana Čaputová, officially assumed office on Saturday. “I have come to serve, not to govern”, the 45-year-old lawyer said in her inaugural speech. She also embraced a pro-European narrative, saying that nothing better could happen to Slovakia than to belong to a community that links economic prosperity with social solidarity and principles of international law. She also highlighted the EU role in tackling the climate crisis.

Government coalition on hold. The Social Democrats (CSSD) will leave its government coalition with the ANO movement of PM Andrej Babis if the latter is convicted in a fraud case. Amid mounting public anger, billionaire Babis, the second richest person in the country, is being prosecuted on suspicion of EU subsidy fraud in the “Stork Nest” case. (Ondřej Plevák, EURACTIV.cz)

They also said it was crucial for President Klaus Iohannis (also from the EPP family) and the ruling PSD party (EU socialists) to quickly start talks in order for Bucharest to get a good portfolio in the next Commission. (EURACTIV.ro)

Opposition leader withdraws resignation. Kornelia Ninova, the leader of the main opposition Bulgarian Socialist Party (BSP), withdrew her resignation at a party congress on Sunday (16 June). Two weeks ago Ninova had announced she would resign over the BSP’s defeat in May’s EU elections.

Boyko Borissov’s GERB party (EPP-affiliated) topped the elections with 31%, followed by BSP on 24%. Delegates to the Congress applauded Ninova for her decision to stay on. (Georgi Gotev, EURACTIV.com)

Presidential speculations. The debate over the successor of Croatia’s president Kolinda Grabar Kitarović has already heated up. According to a survey, former PM Zoran Milanović will be the candidate of the social democratic party (S&D), with elections due in January 2020. Croatia takes over the EU Council presidency then.

Grabar-Kitarović was not clear if she would run again as HDZ’s (EPP) candidate : “We are talking too much about elections and election campaigns in Croatia”.

According to the latest polls, Milanović, who has been leading his campaign “in silence” for months, and Grabar-Kitarović, who has bigger voters’ support, could be the two main opponents. SDP could officially confirm Milanović’s candidacy on Monday. (Karla Junicic, EURACTIV.hr)

Special status. Hasim Mekić, chairman of the executive board of the Bosniak National Council, which represents the Bosniak ethnic minority in Serbia, has sent the EU, the OSCE and the Council of Europe a request to grant special status to the region of Sandžak, as well as a model for solving the Bosniak and Sandžak issue.

Mekić said Bosniaks did not accept their “difficult and uncertain position” and they needed “efficient protective mechanisms and institutions to ensure biological survival and political existence in Sandžak.” The request was previously sent to the governments of Serbia and Montenegro, the states in whose territory Sandžak is located. (BETA.rs/EURACTIV.rs)

One response to “Far-right helps elect mayors in Spain”