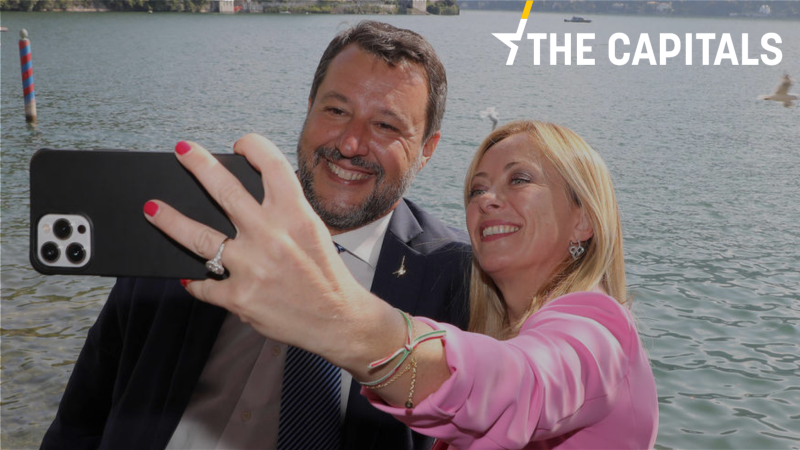 Also read the interview with Russia’s ambassador to the EU Chizhov: Russia is well-placed to play a constructive role in Afghanistan, by Georgi Gotev.

The far-right Brothers of Italy party led by Giorgia Meloni and the far-right party Northern League led by Matteo Salvini are currently leading the most recent polls, with 21% and 20.6% respectively. Read more.

Schäuble urges EU not to push ‘too much’ row with Poland, Hungary. Wolfgang Schäuble, President of the German parliament and one of the longest-serving politicians in the country’s history, warned the European People’s Party (EPP) congress of risks in pushing the fight with Poland and Hungary over the rule of law and treaty infringements to the very end, saying it was fine to withhold their money, but not to go too far.

Schäuble also singled out the Bavarian conservative party CSU, saying they were generally more reticent than the CDU. He said he was in a minority in the conservative union (CDU/CSU) when it came to conceding additional competences to the EU. (Nikolaus Kurmayer |  EURACTIV.de)

French justice minister: adequate measures in place for radicalised prisoners. Radicalised prisoners are subject to measures “adapted to their dangerousness” from when they are first detained, Justice Minister Éric Dupont-Moretti told reporters on Wednesday as the trial over the terrorist attacks of 2015 opened in Paris. Read more.

Tensions with France grow over Channel crossings. Home Secretary Priti Patel and French Interior Minister Gérald Darmanin held talks on Wednesday amid a growing row over the number of migrants crossing the English Channel to the UK. Read more.

Estonia fortifies its border with Russia. Estonia is constructing a new steel fence on its southeast border facing Russia, following steps other Baltic countries and Poland have already taken to ‘fortify’ their borders. Read more.

In other news, the withdrawal of NATO troops from Afghanistan made it difficult for the EU to show capacity, relevance and strategic initiative, Portuguese Defence Minister João Gomes Cravinho told  the opening of the seminar “Info Day Portugal – European Defence Fund” on Wednesday, adding that lessons should be learned from this.

“European Defence is currently going through a time of profound questioning. The process of withdrawal of Allied forces from Afghanistan has confronted the European Union with a difficulty in showing strategic capacity, strategic relevance and strategic initiative,” he added. (Ana Raquel Lopes, Maria João Pereira, Lusa.pt)

Risky travel with a fake COVID test. A 39-year old British citizen was arrested at the airport in Łódź after falsifying his COVID-19 test before boarding a plane to Nottingham. Read more.

Czech-Polish negotiations over Turów mine hit stalemate. Negotiations between Czechia and Poland over mining in the Turów coal mine have now come to a stalemate, which Czech environmental organisations say is being caused by Poland’s unwillingness to solve the dispute and the passiveness of EU institutions. Read more.

Slovak FM praises relations with Czech Republic.  Foreign MinisterIvan Korčok praised the exceptionally warm relations between Slovakia and the Czech Republic at governmental and parliamentary levels on Tuesday as he received a delegation of the Committee on Foreign Affairs, Defence and Security of the Czech Senate led by the head of the Committee Pavel Fischer. Read more.

Bulgaria’s leading party proposes law to ban attempts making COVID-19 jabs mandatory.  The populist party “There is such a people” – who won the last parliamentary elections but failed to form a government – has proposed to ban by law any possibility of introducing mandatory vaccination against COVID-19 in Bulgaria. Read more.

In other news, Croatian law enforcement has started using an application that prevents fined drivers from leaving Croatia before they pay up for the traffic offences they have committed in the country, the interior ministry has reported. The police use this application during checks at border crossings, where the departing drivers from non-EU countries who have committed a traffic offence in Croatia but have failed to pay the fine will be served with a notice to pay the necessary amount.

The ministry says this facilitates the processing of traffic offences involving vehicles registered outside the EU and drivers with no permanent or temporary residence in Croatia. (Željko Trkanjec | EURACTIV.hr)

Merkel to meet Balkan leaders for the last time. German Chancellor Angela Merkel will visit Belgrade on Monday, where she will meet with Serbian President Aleksandar Vučić to discuss political and economic cooperation and the EU integration process. Read more.