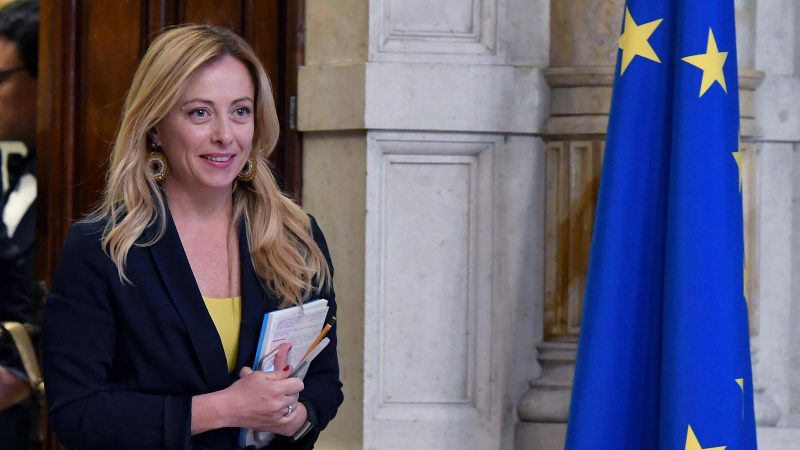 File photo. President of 'Fratelli d'Italia' party Giorgia Meloni addresses the media after a meeting with designated Italian Prime Minister Giuseppe Conte for a round of consultations in Rome, Italy, 24 May 2018. [Ettore Ferrari/EPA/EFE]

An Italian far-right party is aiming to change the national constitution as a means to reduce the influence of EU law over national legislation. Emanuele Bonini has the story for EUelectionsItaly.blog.

The party Brothers of Italy (FDI) submitted to the House of Representatives a draft law which vies to remove all obligations to EU legislation, which in the party’s view, amounts to achieving true independence.

According to article 117 of the Italian constitution, “legislative powers shall be vested in the State and the Regions in compliance with the Constitution and with the constraints deriving from EU legislation and international obligations”.

FDI leader Giorgia Meloni wants the second part of this constitutional text to be deleted. If implemented, it will become possible for Italy to oppose any European obligation.

“We voluntarily reduce our sovereignty,” Meloni stated in the explanatory text of the draft bill.

“In the Constitutions of the other founding countries of the European Union, there are no such general norms,” she said.

Not an easy task

What Meloni and her party submitted to the Parliament is not ordinary draft legislation. It is Constitutional draft legislation, which means that tougher rules apply in passing the amendments.

Constitutional laws must be adopted by each House, after two successive debates at intervals of no less than three months, and approved by an absolute majority of the members of each House in the second vote.

This is the first step. If these requirements are fulfilled, these laws are submitted to a popular referendum, should a request be made by one-fifth of the members of a House of the Parliament or by 500,000 voters or five Regional Councils.

The request can be presented within three months after the publication of the Constitutional law in the official journal.

Will the government help Meloni?

Currently, Meloni sits with the opposition parties, and she cannot command a majority, unless the two ruling parties, the Lega and the Five Star Movement (M5S), decide to back the proposal, currently debated at the Parliamentary committee level.

The reform of Article 117 of the Constitution is in the joint programme for institutional reforms agreed between the leaders of the Lega and M5S. The two are united by the idea that the EU’s influence must be limited or non-binding.