The day after its set-up, the new nationalist political group Identy and Democracy (ID) held a press conference at the European Parliament. [WENGER/EP]

The new far-right bloc brings forth the political heritage of the Europe of Nations and Freedom (ENF), the smallest group in the outgoing hemicycle with only 37 MEPs, which was long kept out of the relevant loop.

The ID wants to end this pariah status. With 73 MEPs, it is now the fifth-largest group in the Parliament and will overtake the Greens if the UK leaves the bloc and its seats are redistributed.

The freshly elected group leader, 32-years-old Lega lawmaker Marco Zanni, doesn’t want a walk-on role for the ID in the European Parliament, expecting that such an increased presence will result in increased powers.

On the sidelines of the first ID press conference on Thursday (13 June), Zanni told reporters the ID will merely ask the other groups to follow the democratic principle and the d’Hondt formula, used for the distribution of top positions in the European Parliament.

“We believe there can be roles for us within the institutional bodies, even in the Parliament’s Bureau or in the parliamentary committees,” he said.

The Bureau consists of the President of the European Parliament and his or her 14 Vice-Presidents, plus 4 Quaestors. Elected for a period of half a parliamentary mandate, it’s the highest administrative and financial body inside the Parliament, as it decides on the funding for political parties and appoints the Secretary-General.

However, a candidate informally assigned to chair a committee using the d’Hondt method can be voted down by the same members, just like Parliament’s vice-presidents are nominated taking into account the size of the groups but are actually elected in the plenary, following the order of numbers of votes received.

It means that smaller groups need an agreement with the bigger ones if they want to get some high-level roles. For instance, despite having the numbers for chairing a committee,  the EFDD group did not manage to do so in the past legislative term.

“It would not be good for the institutions that are now experiencing a deep crisis of legitimacy if political forces voted for by millions of EU citizens will be excluded by the distribution of powers just because of their different ideas,” Zanni added.

Speaking at the group press conference, Jussi Halla-aho, chairman of the Finns party that recently moved to the ID from the conservatives (ECR), reiterated the idea that nationalists had put in place a weak political action in the outgoing European Parliament.

He said that Eurosceptic and immigration-sceptic parties were not successful in taking advantage of the good election results in 2014. “We’re still a minority but larger than before. We don’t want to repeat the mistakes we made,” he added.

The group that wants to change, not destroy the EU, also wants to change tack by being more collaborative with other blocs. “Our doors are open to everyone and our willingness to work in a constructive manner is clear,” said Zanni.

The red line for partnership is the attribution of more powers to the EU, as they want to reduce more and more the European incumbency in national policy.

He mentioned as potential inter-group allies the ECR, where Italy’s other far-right party, Fratelli d’Italia, sits, but also the Czech member of the new liberal group Renew Europe, the ANO 2011 party of the Prime Minister Andrej Babiš. 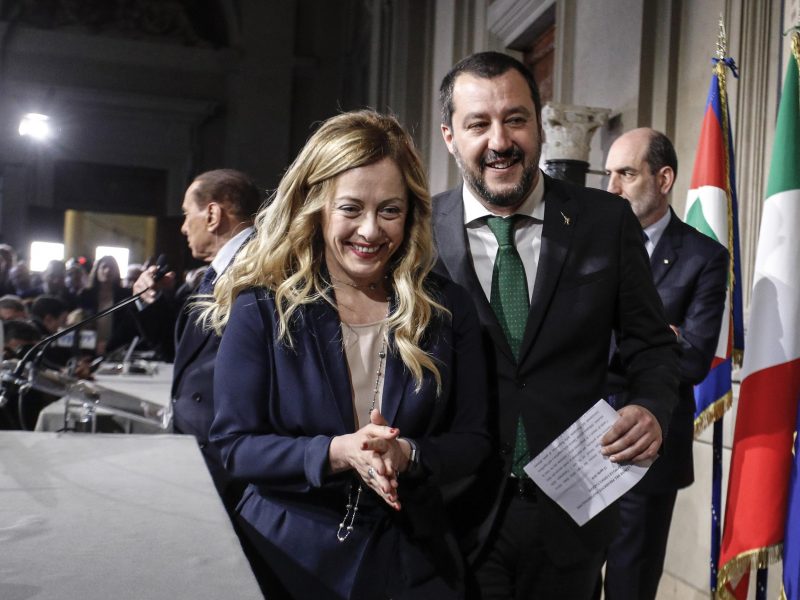 “We’re going to work as a spurious opposition, as the new majority will be such a large one, and even within the groups, there are so many different views,” he said, adding that because of these divisions they will have the chance to pull rank on certain dossiers.

However, the ID itself risks being split on divisive topics such as the fiscal discipline for eurozone countries and the goodwill that Salvini and Le Pen are extending toward Russia.

Pressed by the reporters on the strong divisions within the group, Marine Le Pen said that they are not kids and are politically responsible to millions of voters.

“We know quite well where to go and we are convinced that, even with different traditions, we have a common view,” she said, adding that in the next five years, they will prove to be the most consistent group in the European Parliament.