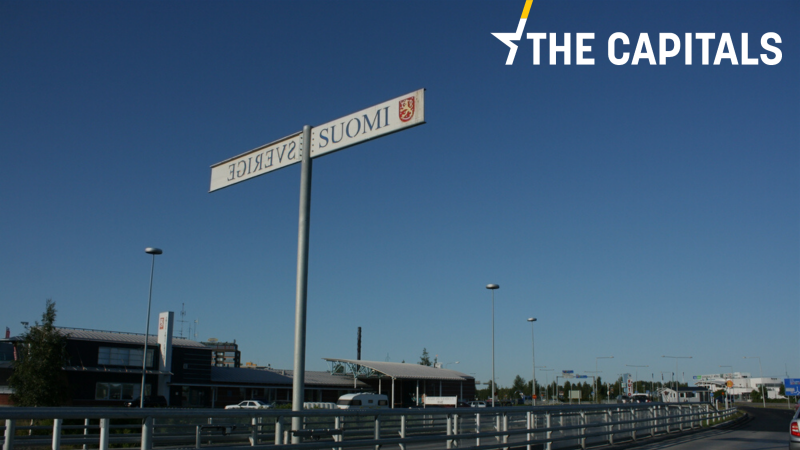 This will have a direct impact on Swedish healthcare system. [Shutterstock/Japan_mark3]

**Op-ed by Wolfgang Ischinger Chairman of the Munich Security Conference (MSC) and Stefan Oschmann, CEO Merck: “We must break the cycle of panic and neglect“.

Before you start reading today’s edition of the Capitals, feel free to have a look at the article “British American Tobacco working on COVID-19 vaccine using tobacco leaves“.

***To stay up-to-date on everything to do with the coronavirus across the capitals, feel free to check out EURACTIV’s comprehensive overview, which is regularly updated with the help of our network of offices and media partners.***

In today’s news from the Capitals

HELSINKI. For the first time in its history, Finland might be facing some kind of threat not from the East, but from the opposite direction – the West. The 600-kilometre-long northern land border between Finland and Sweden was open well before the Schengen agreement, and people are used to commuting back and forth.

However, as the two countries are dealing with the coronavirus crisis differently, with Finland restricting and Sweden recommending, the situation has changed. Finnish authorities and politicians are now pondering whether the border should be closed for the labour force but this will have a direct impact on the Swedish healthcare system.

Nation-wide restrictions continue through Easter. Germany’s social distancing restrictions will continue until at least 19 April, the government announced on Wednesday (1 April) after a teleconference between the federal government and the heads of the states, known as Lander. Chancellor Angela Merkel had warned that “it would be very bad if we loosened the initial restrictions too early […]. We must not get out of the frying pan and into the fire.”

The government also emphasised that these restrictions also include festivities during the Easter holidays. The guidelines advise people to “generally refrain from private travel and visits, even by relatives” and discourage physical contact with anyone outside their household. (Sarah Lawton | EURACTIV.de)

Spitting fines. Belgium has made spitting on police an offence punishable by a hefty fine and jail time following an increase in incidents. The College of Attorneys General confirmed offenders could be fined up to €2,400 and face prison terms of between 3 months and two years. Spitting on food products has even harsher penalties of up to €16,000 and up to five years in prison, De Standaard reported. (Alexandra Brzozowski | EURACTIV.com)

Austrian EU-minister ‘critical’ of Hungarian emergency law. Austria’s Minister for Europe and the Constitution, Karoline Edtstadler of the conservative ÖVP, has said that she is “critical” of Hungary’s recently adopted emergency law “insofar as there is no time limit”, adding that “who gets to say when the crisis is over?” in an online panel debate organised by the Austrian Society for European Politics on Wednesday (1 March). EURACTIV Germany’s Philipp Grüll has more.

“We are thinking about a fund that would be limited in time with the possibility of debt as a long-term response to the crisis,” he said. According to Le Maire, a solution of common debt only for coronavirus could be “more acceptable” for the countries still opposed to ‘coronabonds’. (EURACTIV.FR)

Cash after corona? On Wednesday (1 April), Andreas Wallström, the Chief Economist of the Swedbank echoed something heard before from the White House. In an interview by the broadsheet Dagens Nyheter, Mr Wallsström suggested that every citizen of working-age should be given SEK 10,000 (€900) a month for six months once the worst of corona crisis is over. EURACTIV’s Pekka Vänttinen digs deeper.

COP-26 postponed by COVID-19. The COP-26 climate summit in Glasgow will be delayed  from November until next year as a result of disruption caused by the coronavirus.

The announcement, which was widely expected and backed by environmental campaigners, was made in a joint statement from the UK and UN after a “virtual” meeting of officials. The conference will now take place by the middle of next year. Benjamin Fox reports from London.

Spain tops 100,000 COVID-19 cases with record death toll. In what are “expected figures”, Spain registered its highest daily death toll on Wednesday (1 April) as 864 people died and 7,719 new patients were tested positive. The data seems to indicate a drastic drop in the number of incoming patients, and Health Minister Salvador Illa said that the country has just entered a new “stabilisation phase”. EURACTV’s partner EFE has the full story.

Restrictive measures prolonged. Italy’s government has issued a new decree to extend the current counrty-wide lockdown until 13 April. “If we started to ease the measures, all the efforts would be in vain,” explained prime minister Giuseppe Conte in a press conference.

For Conte, Italy is still in the first stage of the fight against the virus. “Only when experts will agree, we’ll enter the second stage, meaning living with the virus, and then the third stage, the return to normal,” he added. (Gerardo Fortuna | EURACTIV.com)

Another 15 days. The Portuguese government approved on Wednesday (1 April) President Marcelo Rebelo de Sousa’s proposed decree to renew the state of emergency for an additional 15 days to contain the COVID-19 pandemic. Before that, Prime Minister António Costa spoke on TV, saying that the government will “tighten a little” and clarify the rules of movement, especially during Easter. He also warned that April will be a “very dangerous” month when it comes to the virus’ spread. EURACTIV’s partner Lusa has more.

Portugal has been in a state of emergency since midnight on 18 March, with the decree valid until midnight on 2 April. As of Wednesday (1 April), there were 8,251 cases and 187 deaths, which represents a 16.9% increase in the number of deaths. (Lusa.pt)

On Wednesday (1 April), the ruling conservative PiS party introduced new electoral rules ahead of the presidential elections in May. If approved, they will enter into force next week and ensure every citizen is able to vote by mail. This, however, may be problematic as PiS’  majority in the Sejm, the lower chamber of the parliament, largely depends on a small coalition party led by Deputy Prime Minister Jarosław Gowin.  EURACTIV Poland’s Łukasz Gadzała looks into it.

A flurry of lawmaking. In a host of new proposals submitted by the Deputy Prime Minister Zsolt Semjén late Tuesday night (31 March), the government proposes to legislate on gender, the Budapest-Belgrade railway, the capital’s development project, theatres and more.

In the wake of Hungary’s new law that allows PM Viktor Orbán to rule by decree as long as the state of emergency is declared, the government has proposed a series of laws, unrelated to the pandemic, for the parliament to decide on. EURACTIV’s Vlagyiszlav Makszimov looks into them.

A blackout is still an option. Prime Minister Igor Matovič (OĽaNO) is still entertaining the notion of a “blackout” that would last between and two and three weeks, as well as the idea of “turning down the country” as one of the possible scenarios on which he wants to consult the public opinion in some way. EURACTIV Slovakia’s Zuzana Gabrižová looks into what others think of such ideas.

Postponing deadline. Because of the coronavirus crisis, the European Commission has postponed the deadline for the Czech regional development ministry’s response to the Commission’s audit on Prime Minister Andrej Babis’ suspected conflict of interest by two months until 5 June, public Czech TV reported yesterday.

Bulgaria extends state of emergency. The Bulgarian authorities extended on Wednesday the COVID-19 state of emergency until 13 May. The decision must be approved by Parliament. Prime Minister Boyko Borissov wrote on Facebook that social distancing is the only effective measure against the pandemic. Bulgaria has also introduced heavy fines (€2,500) for trespassers, including for those who take a walk in public parks. The number of confirmed cases on Wednesday was 422, the total number of deaths is 10. The number of people hospitalized is 207.(Krassen Nikolov | EURACTIV.bg)

Call to cancel Mobility Package. Bulgaria and seven other countries have asked the EU institutions to shelve draft legislation on the Mobility Package which would put additional burden on road transport firms hit by the coronavirus outbreak.

Transport ministers of Bulgaria, Hungary, Lithuania, Poland, Cyprus, Latvia, Malta and Romania said the EU should stand up for transport firms as it has already taken steps to help struggling airlines. “Instead, we are on track of adopting the first Mobility Package whose provisions, combined with the aftermath of the coronavirus outbreak, will literally bring many European road transport businesses to an end,” said the letter to the heads of the three main EU institutions.

EURACTIV Bulgaria has the story.

New economic measures. Croatian PM Andrej Plenković has presented the second economic relief package tailored for entrepreneurs who are struggling amid the coronavirus crisis and taking account of the criticisms from the private sector. EURACTIV Croatia’s Tea Trubić Macan has the story.

EU High Representative for Foreign Affairs and Security Policy, Josep Borell, hailed on Wednesday (1 April) a decision of the Kosovo government to fully lift the tariffs on goods coming from Serbia and Bosnia and Herzegovina. Read more.

Meanwhile, Serbia’s foreign minister, Ivica Dacic, has received a letter from the ambassadors of Sweden, Denmark, Finland and Norway thanking him for offering to transfer their citizens stranded in Serbia, the Foreign Ministry announced on Wednesday (1 Apri). EURACTIV Serbia has more.