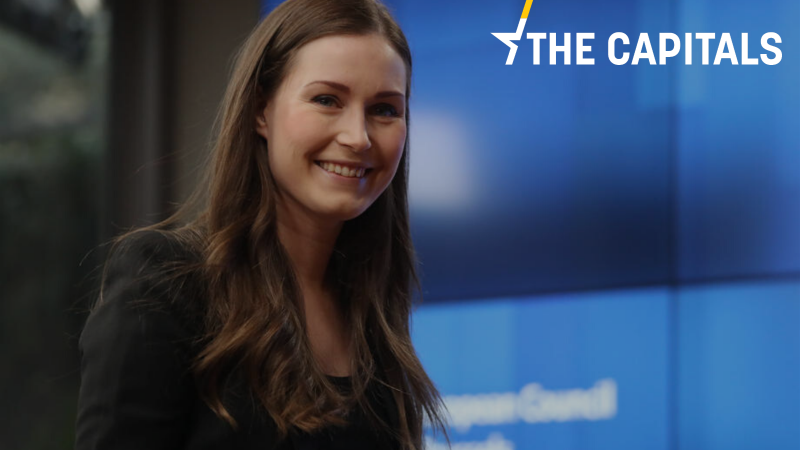 Finnish PM Sanna Marin: "We should not concentrate on the question of blocks. The focus should be on the matter itself". [EPA/LUDOVIC MARIN]

Before you start reading today’s edition of the Capitals, feel free to have a look at the interview of EURACTIV Italy with Italian Minister of European Affairs Enzo Amendola: “No country questions the need for debt issuance”

Now that many European countries have started lifting lockdown measures and opening borders, make sure you stay up to date with EURACTIV’s comprehensive overview, which is regularly updated with the help of our network of offices and media partners. Also, check our country update pages, such as the one for Spain or Slovenia.

Finland is re-positioning itself. The Franco-German recovery package is a signal that the EU has a broader future perspective than before, Finnish Prime Minister Sanna Marin (SDP) said yesterday (25 May).

Meanwhile, in an interview with EURACTIV Italy, Italian Minister of European Affairs Enzo Amendola said no EU country now questions the need to issue debt. He also said “conditionality” should be there to ensure “wise” spending.

Pekka Vänttinen from Helsinki and Roberto Castaldi from Rome have the story.

Government wants to prolong restrictions. As state governments, such as Thuringia’s, hope to remove all COVID-19 restrictions in June, the chancellery wants to extend the country’s contact restrictions until 5 July, according to media reports published yesterday. This would mean that people would have to continue maintaining a 1.5-metre distance and wearing masks in shops and on public transport.

However, the chancellor’s office reportedly wants to allow for some easing of restrictions. This includes allowing members of two households, up to ten people, to meet at home or in public places, according to a draft of the resolution seen by DPA.

In other news, the German government announced its €9 billion bailout plan for Lufthansa on Monday (25 May) following last week’s reports on an agreement between the members of the grand coalition. However, in exchange, the government will be taking over 20% of the company’s shares and become a silent partner on the board. (Sarah Lawton | EURACTIV.de)

Consultation to boost working conditions of healthcare staff. The French government launched on Monday a broad consultation aimed at improving the working conditions and pay of healthcare staff, as well as patient care in hospitals. It follows a promise by President Emmanuel Macron, who at the end of March spoke of “a massive investment and upgrade plan” for hospitals. Salary increases, working hours and hospital governance will be among the issues discussed, with concrete responses expected by mid-July. (EURACTIV.FR)

Eastern borders to open mid-June. “Under the condition that numbers develop as well as they do now” border controls could soon be eased, Austrian Foreign Minister Alexander Schallenberg told a joint press conference with his counterparts from Hungary, Slovakia and the Czech Republic, emphasising, however, that the heads of state have the final say.

While the borders with Germany and Switzerland are also set to open mid-June, there is still no timeline regarding the southern borders to Slovenia and Italy. (Philipp Grüll | EURACTIV.de)

Irish DPC gets told off. Austrian privacy activist Max Schrems has criticised the performance of the Irish data protection commission (DPC), in a bid to force the authority to step up GDPR probes into some of the world’s largest tech firms.

“After two years, we feel that the time has come to shine light on the shortcomings of the GDPR’s current enforcement in Ireland and bring the debate into the public,” a letter written by Schrems to EU authorities, published on Monday, said. EURACTIV’s Samuel Stolton takes a closer look.

Hungary opens borders to Serbian citizens. Serbian citizens may use all nine border crossings as of 10 am on Monday to enter Hungary without having to undergo PCR tests or the mandatory 14-day quarantine, the RTS public service reported.

This was confirmed by Hungarian Foreign Minister Péter Szijjártó, who said Hungary had opened its borders to Serbian citizens at the Rozke border crossing after he had met with Serbia’s European integration minister. But what else did the two ministers say? EURACTIV Serbia looks into it.

MEP report urges EU to increase pressure on Poland over rule of law. MEPs on the European Parliament’s Civil Liberties, Justice and Home Affairs Committee (LIBE), working on a draft report on the situation in Poland, have called for “decisive action” by the other EU institutions. Read more.

Coal mining halted due to coronavirus. The blanket testing of all miners in the Darkov area revealed 212 positive cases of COVID-19, following which more than 1,000 people who were in contact with the miners have been quarantined. As a result, the Darkov coal region halted its mining activities and could not benefit from the nationwide loosening of lockdown measures that came into force on Monday.

Meanwhile, the government decided to lift travel restrictions. As of Tuesday (26 May), all borders crossing with Austria and Germany will be opened with random checks. From Wednesday (27 May), Czechs will be able to travel to Slovakia without a test and without having to undergo quarantine but will have to return home within 48 hours. (Aneta Zachová | EURACTIV.cz)

Unusual protest. Gym owners slowed down traffic on a major highway on Monday (25 May) in protest against the continued closure of gyms as part of the government’s lockdown measures, which continue to bar gyms and all indoor sports venues from opening. The initial plan was to block the highway entirely.

Although Prime Minister Igor Matovič had threatened to consider banning highway obstruction as a means of public protest, it was later announced on Monday that gyms will be allowed to open on 3 June. (Zuzana Gabrižová | EURACTIV.sk)

Bulgaria opens kindergartens. While Bulgarian authorities have started opening kindergartens across the country after a closure period of two and a half months, medical experts are urging people who can look after kids at home not to send them back. Last week, Bulgaria saw a steady decline of active COVID-19 cases (now around 1,450) and expects the medical part of the crisis to be over by mid-June. (Krassen Nikolov | EURACTIV.bg)

BUCHAREST
Let’s try the other way. After an unsuccessful attempt to force supermarkets to sell at least 51% of food items from local production, Romanian MPs are now trying to impose an obligation for state-owned entities to stop buying imported food. Bogdan Neagu reports.
///

Traffic Law amendment for e-scooters. Although the number of electric scooter users is growing by the day, Slovenia still does not have legislation governing their use, so that they are driven in pedestrian zones, on cycle lanes or pavements.

The infrastructure ministry is drafting an amendment to the Road Traffic Rules Act, which would also include electric scooters. Details are scant but unofficially, the new rules are said to stipulate mandatory helmets, the use of front and rear lights and side reflectors, and a maximum speed of 25 kilometres per hour. (Zoran Radosavljević | EURACTIV.com)

Rescue package data. Croatian employers have applied for the government’s rescue package to cover the salaries of 485,000 of their workers for March, for which the government has paid out a total of 1.6 billion HRK in support. According to the most recent data, this amount has covered 38% of the national economy during that period. Read more.

Meanwhile, the fifth annual March for Life, a pro-life protest which was supposed to be held in Zagreb this week, has officially been postponed due to epidemiological measures which still discourage large gatherings on public spaces. (Tea Trubić Macan, EURACTIV.hr)

EU takes united stand on Belgrade-Pristina Dialogue. The EU has taken a united stand on the frameworks and principles to be followed during talks between Kosovo and Serbia, a European Commission spokesperson said, adding that the content of a final agreement must be in conformity with international law and the laws and values of the Union. Read more.