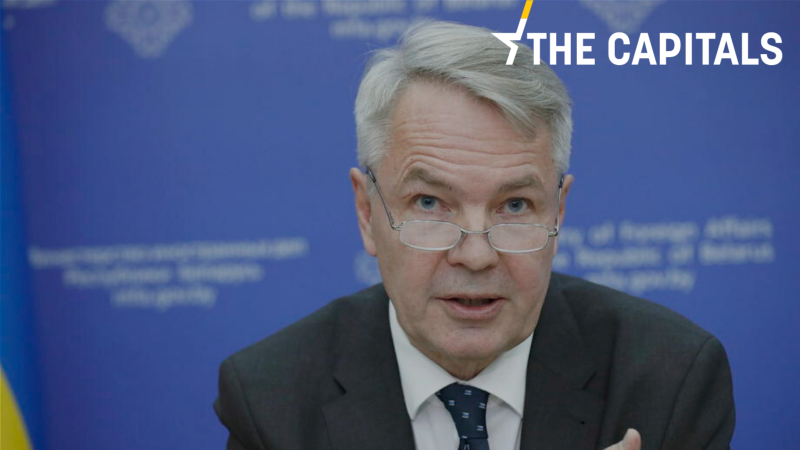 The minister also predicted that the EU's security and foreign policy would change as a result of Brexit. [EPA/TATYANA ZENKOVICH]

Before you start reading today’s edition of the Capitals, we invite you to read an interview with the Chinese Ambassador to the EU on the coronavirus conducted by Sarantis Michalopoulos: “Panic could be a more fearful adversary than coronavirus“.

Also, feel free to have a look at the article “In Portugal, 15 ‘cohesion countries’ call for stronger EU budget” written by our partner Lusa.

HELSINKI. The Finnish Foreign Minister, Pekka Haavisto (Greens) said he believes that the importance of Africa and Latin America to the European Union is going to increase after Brexit because France and Spain are expected to have stronger roles in the EU. EURACTIV’s Pekka Vänttinen has more.

Kurz threatens to veto EU budget and Operation Sophia. Austrian Chancellor Sebastian Kurz (ÖVP) said in a radio interview on Saturday (1 February) that Austria would veto the current proposal for the EU’s multiannual financial framework (MFF), saying that it was “unacceptable” for Austria to pay more than 1% of its GDP (the current draft would increase contributions to 1.1%). Kurz said that four other net payer countries (Germany, the Netherlands, Sweden and Denmark) share this stance and would also veto the current proposal.

But what did the chancellor have to say about the EU’s proposal to ‘revamp’ Operation Sophia? EURACTIV Germany’s Philipp Grüll reports.

In other news, the Christian Social Union (CSU) began its campaign against speed limits on the Autobahn. The issue has resurfaced in German politics in light of growing environmental concerns and recent studies that indicate that introducing a speed limit could save lives on German motorways.

But what are the odds of the German government introducing speed limits on the Autobahn? EURACTIV Germany’s Sarah Lawton looks into it.

Letter to British friends. French President Emmanuel Macron will grant the city of London the Legion d’Honneur in May to celebrate the 80th anniversary of General Charles de Gaulle’s appeal to the French Resistance from the UK capital on 18 June 1940. This was announced in a long letter written in English and posted to the president’s Facebook page. EURACTIV France has a few quotes from the letter.

New turn. After the king ended the mandate of informers Joachim Coens (CD&V) and Georges-Louis Bouchez (MR), he sent Koen Geens (CD&V) into the field to find a way out of the federal government stalemate. Alexandra Brzozowski has more.

Johnson doubles down. Boris Johnson will set out an uncompromising vision for a trade deal with the European Union on Monday (3 February) saying there is “no need” for the UK to follow Brussels’ rules. Two days after the UK formally left the EU, the prime minister will call for a Canada-style free trade agreement with the bloc and threaten to walk away if it cannot be struck by the end of 2020. (Benjamin Fox, EURACTIV.com)

Republican Sinn Féin rise in polls. Sinn Féin and Fianna Fáil are leading the polls with 24% each in the run-up to this week’s general election, a new opinion poll over the weekend reveals. Leader of the republican Sinn Féin party, Mary Lou McDonald, welcomed the recent results, saying that it “reflects the energy and momentum for Sinn Féin and for change.”

‘EU fiscal pact does not correspond to Spain’s reality’. Spanish vice-president for Economy, Nadia Calviño, said in an interview with La Vanguardia that the EU’s Stability and Growth Pact “does not correspond to the economic reality” of the country and that some of its methodological aspects are “questionable.” Calviño has long criticised the EU’s fiscal pact. EURACTIV’s Beatriz Rios has more.

Low-emission zone. Lisbon city hall is going to create a Reduced Emissions Zone in the downtown area from July or August. Mayor Fernando Medina justified the decision from an environmental perspective, emphasising that it would contribute to a significant reduction in pollution, with an “annual saving of about 60,000 tons of carbon dioxide”.

Traffic access to the downtown Baixa-Chiado area of central Lisbon will be exclusively for residents, drivers with special stickers and authorised vehicles, between 06:30 and 00:00. Lusa.pt’s Tomás Santos has the story.

In other news, 15 EU member states, known as ‘The Friends of Cohesion’, met in Beja on Saturday and reaffirmed their opposition to planned MFF cuts. The full story is by Maria de Deus Rodrigues, Pedro Morais Fonseca and Rita Ranhola.

Sigmalive.com has quoted sources from the Cypriot Ministry of Defence as saying that French war aircraft flew over Paphos after a permit was granted by the Republic of Cyprus. The same sources said that joint exercises between the two countries would soon take place. The fighters took off from the Charles de Gaulle aircraft carrier off the coast of Cyprus. A related video was posted on Twitter by the French ambassador to Cyprus.

Migrant labour in Italian farms. According to the UN special envoy Hilal Elver, half of Italy’s agricultural workforce is made up of migrants, most of them undocumented. Elver went around the country for 11 days, visiting Lazio, Lombardy, Tuscany, Piedmont, Apulia and Sicily. In her final report, she criticised the “sophisticated Italian food system”, where those working in the agricultural sector “work excessively long hours, under difficult conditions and with a salary too low to cover their basic needs.” (Gerardo Fortuna | EURACTIV.com)

Macron goes to Poland. French President Emmanuel Macron will pay his first visit to Poland today (3 February) during which he is scheduled to meet with Polish authorities but also give a lecture at the University in Kraków. His visit comes at a time where both governments do not see eye to eye on several issues, including EU-Russia and EU-US relations, as well as the level of EU integration, rules of the common market and future European army. (Łukasz Gadzała | EURACTIV.pl)

Commission ‘needs to respect us’, says Babiš. “The money available in the programmes centrally managed by the European Commission, which are used mainly by net payers, is rising to €152 billion. This does not make any sense. 17 EU member states clearly say: In the 2021–2027 period we want more money for cohesion policy and investments. This is essential for our future. The European Commission should respect this. They did not ask us what our priorities are,” Czech PM Andrej Babiš tweeted before the Friends of Cohesion summit in Portugal on Saturday.  (Ondřej Plevák | EURACTIV.cz)

Hungarians must be winners of the 21st century. Because Hungary and Hungarians around the world were on the losing side of the 20th century, it is now up to them to become winners of the 21st century together, Gergely Gulyás, the head of the Prime Minister’s Office, told a forum organised by the Rákóczi Association. According to Gulyás, the signing of the Treaty of Trianon in 1920, was the biggest mistake in the 20th century. The Treaty formally ended the war between allies of World War I and the Kingdom of Hungary but also under which two-thirds of Hungary’s territory was ceded to neighbouring countries.  (Željko Trkanjec | EURACTIV.hr)

Coal guard. On Friday (31 January) the parliament ordered the government to take action to protect the production capacity of its coal plants, regardless of the European Commission’s position on the matter, meaning that despite huge losses Bulgaria will keep its coal industry indefinitely. EURACTIV Bulgaria ‘s Krassen Nikolov digs deeper.

Russian ambassador – ‘somebody doesn’t want Balkan Stream’. The Russian ambassador to Bulgaria Anatoliy Makarov said bilateral relations between the two countries had sharply deteriorated since 21 October, the day when the 11-km gas interconnector at the border with Turkey was inaugurated. Without naming the US, Makarov said that “somebody doesn’t want the Balkan Stream pipeline”. “Balkan Stream” is the name Bulgaria gives to the continuation of Turkish Stream on its territory. Speaking on bTV channel, Makarov linked the advance of the gas pipeline project to a series of allegations of Russian covert action in Bulgaria. (Georgi Gotev, EURACTIV.com)

New coalition without elections likely. Milan Kučan, former president of Slovenia, believes that a new Slovenian government will probably be formed in the current parliament. However, Kučan warned in an interview to Croatian Večernji list that populist governments are coming with simple solutions which they cannot fulfil, adding that if Janez Janša were to become prime minister, Slovenia would take a sharp turn towards the right. (Željko Trkanjec | EURACTIV.hr)

Cultural dispute. Someone who had not yet taken the office ”doesn’t have right to interfere”, said PM Andrej Plenković on Sunday (2 February) calling the comments of newly elected president Zoran Milanović “trivial”. Milanovic, who is due to take office on 19 February, criticised the PM for not attending the opening ceremony of the project “Rijeka – European capital of culture 2020” on Saturday evening. But why the PM did not attend? EURACTIV Croatia’s Karla Juničić has more.

Special representative for Belgrade-Priština dialogue. EU High Representative Josep Borrell said during his first visit to Serbia that the EU candidate country was a key partner, adding that he firmly supported a deeper European perspective for the entire Western Balkans region, including Serbia. He also said that the EU had to take a more active role as a mediator in the Belgrade-Priština dialogue and that a special representative for the talks would be appointed. (EURACTIV.rs)

Finally a coalition. Albin Kurti, leader of Self Determination (Vetevendosje) and Isa Mustafa, leader of the Democratic Alliance of Kosovo (DSK) signed on Sunday (2 February) an agreement to create a new government four months after Kosovo held early elections on 6 October 2019. The parliament will convene today (3 February), to vote for a new cabinet headed by Kurti, after the two parties secured enough votes to support the new appointments from minority parties.

Although the compromise was reached immediately after the visit of High EU Representative Josep Borrell, Kosovo’s Constitution ensures that the government needs to have Serbian coalition partners. So what did Serbian politicians have to say? EURACTIV.rs and Željko Trkanjec report.