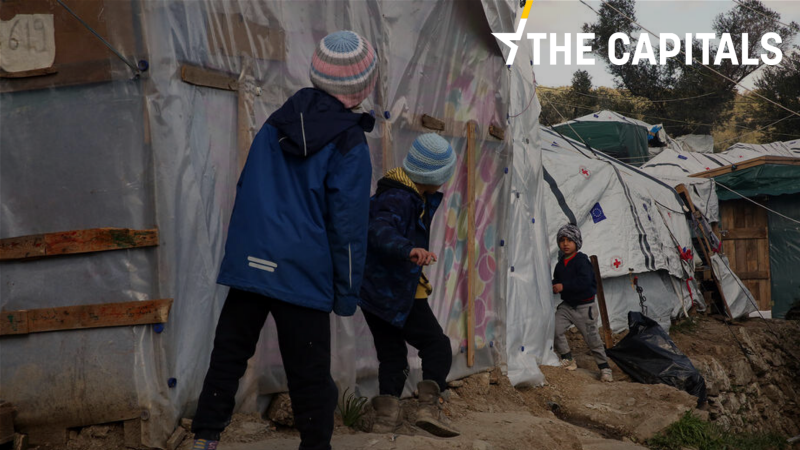 Her comments stemmed from the situation in Greece, where a large number of unaccompanied minors are living in refugee camps in difficult conditions. [EPA/ORESTIS PANAGIOTOU]

Before you start reading today’s edition of the Capitals, we invite you to read the story “Von der Leyen admits mistakes, denies responsibility in defence contract scandal” written by Philipp Grüll.

HELSINKI. Finland’s Interior Minister Maria Ohisalo (the Greens) has described the treatment of asylum seekers and refugees in the European Union as being “rather shameful from the viewpoint of our common values”. EURACTIV’s Pekka Vänttinen has more.

Von der Leyen testifies in corruption probe. European Commission President Ursula von der Leyen was in Berlin yesterday (13 February) to answer questions about the contracting of external experts during her time as Germany’s defence minister. Following the reports of vast sums having been paid to these consultants and allegations of nepotism in the hiring process, a parliamentary inquiry is now seeking to determine the legality of the contracts awarded, as well as von der Leyen’s knowledge of what she called “mistakes”.

EURACTIV Germany’s Sarah Lawton looks into the Bundestag probe into the Commission chief.

Drastic drop in unemployment. In the last quarter of 2019, the French unemployment rate reached 8.1% (down 0.7 percentage points compared to the previous year), meaning it dropped to its lowest level since 2008, according to the statistical office INSEE. The new figures are making the government’s target of reaching a 7% unemployment rate by the end of Emmanuel Macron’s mandate in 2022 “frankly attainable”, said Labour Minister Muriel Pénicaud. Never before have so many people been hired on permanent contracts, never before have so many apprentices and job seekers been trained,” she added. (EURACTIV.FR)

Cyberattack on foreign ministry repelled after over five weeks. Regarding the cyberattack on the country’s foreign ministry, which had first been reported on 4 January, Foreign Minister Alexander Schallenberg declared yesterday (13 February) that the ministry’s IT-systems had been cleansed successfully, “maximum safety of data” has been re-instituted, and that no damage to the systems had been detected. Investigations into the attackers’ origin, however, are still ongoing as the ministry has only so far disclosed that the operation’s scale would imply a state actor was involved. (Philipp Grüll | EURACTIV.de)

Socialist Sánchez and conservative leader Casado will meet. Spain’s socialist PM Pedro Sánchez will meet with Pablo Casado, leader of the conservative Partido Popular (PP), on Monday (17 February) in a climate of mutual mistrust due to their strong differences on several key aspects of Spanish politics, in particular with regard to the crisis with Catalonia’s separatist parties, EURACTIV’s partner EFE reported.

In other news, Spain did not violate the European Convention of Human Rights when they summarily expelled two men from the Melilla enclave to Morocco, the Strasbourg court found. “That the court has today decided that Spain was within its rights because the men entered the country irregularly, is truly a blow for refugees and migrant rights”, said Anna Shea, a researcher on refugee and migrant rights at Amnesty International.

€450 million for state propaganda. The Polish Sejm voted to provide Polish state television TVP with 2 billion zlotys (over €450 million) in funding (more than in the two previous years) for the next year after a heated debate in the parliament’s lower house. TVP is a prime example of a public institution captured by the ruling conservative Law and Justice party (PiS) and used for party propaganda to the dismay of many, even some PiS supporters. (Łukasz Gadzała | EURACTIV.pl)

EU enlargement is not a ‘burden’. The head of the lower house of Czech parliament, Radek Vondráček (ANO, RE), said that further EU enlargement would not be a burden and that “accession talks must speed up” in a meeting with his counterparts from Slovakia, Austria, Montenegro and Serbia in Bratislava on Thursday (13 February). As Vondráček is convinced that southeastern European countries deserve to become fully-fledged EU member states, he added that Czechs would try and convince the French politicians who still oppose the enlargement process. (Ondřej Plevák | EURACTIV.cz)

Forint in free fall. Hungary’s currency, the forint, fell below 340 against the euro and reached a record low, meaning it has lost more of its value by mid-February this year than in the whole of last year. “We have shielded Hungarian citizens as much as possible from exchange rate risk, therefore, the issue of the exchange rate is not so central an issue now,” Gergely Gulyas, Prime Minister Viktor Orbán’s chief of staff, said in reaction to the currency’s drop in value on Thursday (13 February). (Željko Trkanjec | EURACTIV.hr)

***Read an op-ed written by Edi Rama, the prime minister of Albania: “Mini-Schengen is not a ‘plan B’ for the Western Balkans”

Waste incineration. The government will have to check how four of the country’s largest thermal power plants have burned waste, the prosecutor’s office has ordered. This decision was motivated by “the great importance of the problem and the possible adverse effects on the life and health of the people in the settlements in the immediate vicinity”. Authorities must determine if the facilities have filters for air purification and whether they have permits to store and burn waste. (Krassen Nikolov | EURACTIV.bg)

In other news, real GDP growth accelerated from 3.1% in 2018 to an estimated 3.7% in 2019, despite headwinds from weaker external demand and higher uncertainty abroad, the European Commission said in its winter economic forecast. However, the country’s real GDP growth is expected to slow significantly to 2.9% in 2020 and 3.1% in 2021 due to weaker domestic demand growth. Private consumption, despite being forecast to remain the key growth driver, will see its contribution to economic expansion decline on the back of lower employment growth. (Dnevnik.bg)

Feud over accusations in the plenary. Croatian EPP MEPs regret that they were the only Croatian representatives during a heated plenary discussion on EU migration in the European Parliament in which progressives attacked the humanitarian situation of refugees on the Croatia-Bosnia border. HDZ deputies have stated that the “problem is of national interest and should, therefore, have been addressed by all national MEPs”. EURACTIV Serbia’s Tea Trubić Macan digs deeper.

In other news, Zagreb Mayor Milan Banić has issued an order to dismiss all HDZ officials hired in the city’s institutions after the ruling party rejected the mayor’s urban development plan (GUP) this week. According to anonymous sources, a “sudden reshuffle” could claim several high positioned names closely linked to PM Andrej Plenković. HDZ still believes cooperation with Bandić is possible but warned that “if Bandić continues to be spiteful, they are also going to play the same game”. (Tea Trubić Macan, EURACTIV.hr)

EU sees higher growth. The European Commission has upgraded its forecast on Romania’s economic growth for this year and the next in its winter forecast. The EU executive now expects Romania’s GDP to grow 3.8% in 2020 (compared with 3.6% in the autumn forecast) and 3.5% in 2021 (from 3.3% in the November report) as it foresees good investment prospects for the country but warned that while domestic production should remain strong, there are risks of fiscal slippages.

In other news, Romania is still waiting to see what emergency ordinances were adopted in the last meeting of the government before it was dismissed by the parliament. A day before the no-confidence vote, Romania’s centre-right government adopted a large number of bills last Tuesday (4 February), causing outrage among observers and the opposition. EURACTIV Romania has the story.

Turkish-French consortium to get concession thanks to president’s sister. Montenegrin airports in Podgorica and Tivat, which welcome about 2.5 million passengers every year, are in the process of leasing the concession, which will most likely go to the Turkish-French consortium made up of TAB and Aéroports de Paris (ADP). The media had previously reported that TAB and ADP had hired the law firm of Ana Đukanović, the sister of President Milo Đukanović. (Željko Trkanjec | EURACTIV.hr)

Kosovo not included in Serbia’s “mini Schengen” draft. Serbia circulated a draft deal on regional cooperation initiative dubbed as “Mini-Schengen” last week, which did not mention Kosovo although there had been “no negative reaction” from embassies so far, TV21 reported. The draft foresees cooperation between Serbia, Albania and North Macedonia on trade and the “exchange of classified information by border authorities”, including customs. (Željko Trkanjec | EURACTIV.hr)

2 responses to “Finnish minister: EU treatment of refugees is ‘shameful’”