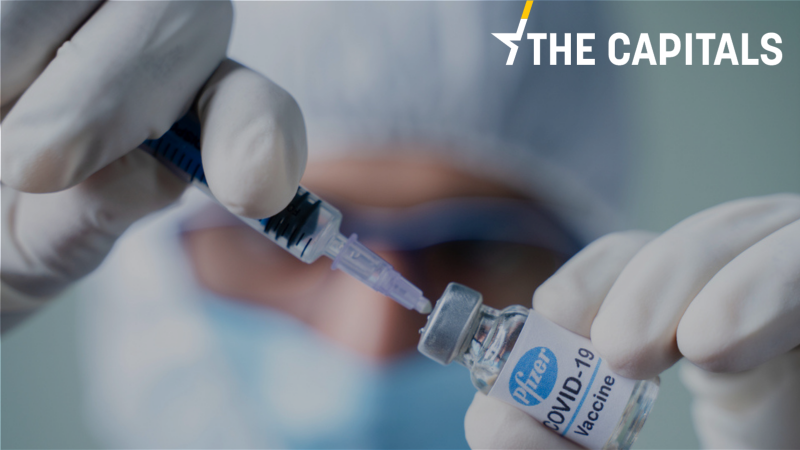 Sari Roos, a nurse working for the City of Helsinki was frustrated after administering the jabs to people as some doses remained in the syringe and needle, especially as the ordered deliveries were slow to arrive. [Shutterstock/lakshmiprasada S]

Before you start reading today’s edition of the Capitals, feel free to have a look at the article “Borrell justifies his ‘controversial’ visit to Moscow” by Georgi Gotev.

Also read the interview “Sinkevicius: ‘There can be no return to business as usual’ after the pandemic“, conducted by Alexandra Brzozowski.

A Finnish nurse has made headlines by appearing to disprove pharmaceutical company Pfizer wrong with regards to its estimate that every vial of the COVID-19 vaccine is enough for five jabs, by demonstrating that seven people can be vaccinated using one vial. Read more.

Flemish health minister rejects calls to prioritise youngsters in vaccination. A group of about 40 people from various sectors in Flanders have written a letter asking for young people between 16-25 years to be considered an “essential” group and be given priority in Belgium’s vaccination campaign. Flemish Minister of Health Wouter Beke rejected the idea. Read more.

Merkel reaffirms vaccination promises. Despite a rocky start to the German vaccination rollout marked by delivery delays and issues with scheduling, Chancellor Angela Merkel is still confident that a vaccine will be available to anyone that wants one by the end of the summer at the latest. Read more.

French economy minister warns restaurant owners flouting COVID-rules. After testimonies of clandestine restaurant openings were shared across social media over the past few days, Economy Minister Bruno Le Maire told RTL in an interview Monday morning that if restaurants were to serve customers again, they would first be deprived of solidarity funds for the month. Read more.

Europol issues warning on Irish COVID criminal group. False coronavirus certificates are on the rise across the EU as more countries in the bloc request visitors to present evidence of a negative COVID-19 test in order to be allowed entry, according to the EU’s police agency Europol. On Monday, the organisation released a warning notification that highlighted the malicious activities of criminal groups across the EU in fabricating negative coronavirus certificates. Of particular note, was a recent case involving the notorious Irish ‘Rathkeale Rovers’ criminal operation.

“Europol received additional intelligence on the alleged use of a mobile application by the Rathkeale Rovers Mobile Organised Crime Group which allows members of the organised crime group to manually falsify test results,” the threat warning said. (Samuel Stolton | EURACTIV.com)

Northern Ireland suspends some port checks over staff safety concerns. Northern Ireland temporarily suspended some post-Brexit checks at two ports on Monday (1 January) after a local council withdrew staff over concerns for their safety and police said they planned to increase patrols at points of entry. Read the full story.

Italy’s unemployment rate increased in 2020, impacting women and young people the most. While Italy’s general unemployment rate reached 9% in December 2020, the number of unemployed increased by 444,000, the National Statistical Institute (Istat) reported on Monday, noting that since the start of the pandemic, 426,000 jobs have been lost.

Meanwhile, youth unemployment reached one of the highest rates across the EU at 29.7%, and the number of job seekers also fell by 8.9%. Among the 101,000 fewer workers registered in December, 99,000 were women.

In other news, following the government crisis triggered by ministers from former Prime Minister Matteo Renzi’s Italia Viva party leaving the government, Chamber of Deputies President Robert Fico is mediating more detailed negotiations between the parties that supported the outgoing government of Prime Minister Giuseppe Conte. “By the end of this week, we will have the new government. It must be an executive at the height, with capable and deserving people”, Renzi wrote in his newsletter on Monday. (Daniele Lettig | EURACTIV.it)

Polish vaccine against COVID-19 – a work in progress. A group of scientists from the Warsaw University of Technology is ready to test their COVID-19 vaccine on animals but testing would depend on finding a bigger partner with the necessary resources. Read more.

Second nationwide AG screening did not ease Slovakia’s hospitals. The second round of nationwide antigen testing organised between 18 January and 26 January in Slovakia was attended by about 2.9 million – of which 1.24% tested positive – a new record in the number of hospitalisations since the start of the pandemic was reached. Read more.

Croatian radical right party gathering signatures for anti-abortion law. The radical right party of Croatian Sovereigntists on Monday started gathering signatures that would give them a possibility to force parliament to discuss their proposal for a law on the protection of life, under which an abortion would only be possible if the pregnancy poses a threat to the pregnant woman’s life. Read more.

Intellectuals publish another open letter against PM Janša. A group of intellectuals have sent a third letter criticising Slovenian Prime Minister Janez Janša, his party, and the government coalition for its management of the COVID-19 health crisis, for “spreading and encouraging hate speech”, and for not keeping the public informed. Read more.

Vaccines for 200,000 Republika Srpska citizens (living in BiH’s Serb entity) will be procured by mid-March, said Republika Srpska Health Minister Alen Šeranić. Just a few days ago, BiH’s Presidency Chairman Milorad Dodik said that some 100,000 vaccines from Russia would arrive in the country’s Serb entity and that the vaccination process should begin in February.  (Željko Trkanjec | EURACTIV.hr)

“Montenegro has long been dependent on tourism and perhaps this is an opportunity for diversification and structural transformation, which could create new markets for new, better-paid skills that can move Montenegro in terms of poverty reduction,” Putin explained. (Željko Trkanjec | EURACTIV.hr)