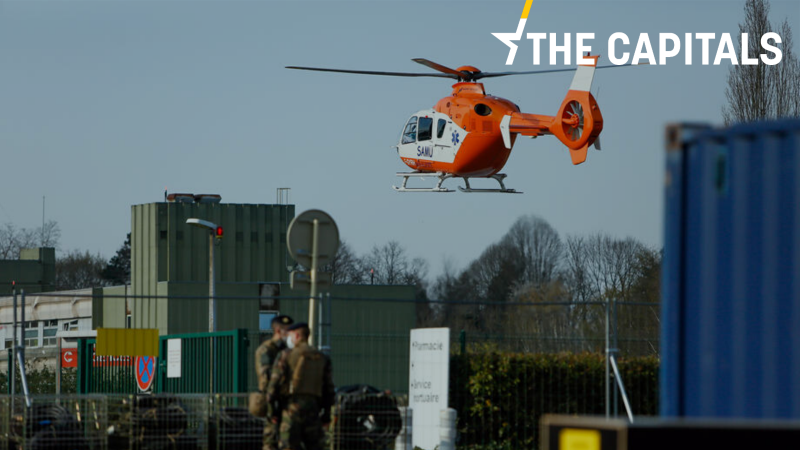 Before you start reading today’s edition of the Capitals, feel free to have a look at the article “EU warns virus could expose firms to foreign buy outs“.

PARIS. In France, not everyone is happy with the way the French government is dealing with the coronavirus crisis. So far, five complaints have been lodged by individuals and medical associations before the French Court of Justice against Prime Minister Édouard Philippe, former Health Minister Agnès Buzyn and current Health Minister Olivier Véran.

Meanwhile, President Emmanuel Macron has decided to launch the military operation ‘Resilience’ to support the population. EURACTIV France has the story.

Read also: “German economy minister: Help is on the way“.

Czech care-workers can commute to Austria for work. Czech healthcare workers, who commute between Austria and the Czech Republic will now be able to commute to Austria again, after Czech Home Affairs Minister Jan Hamacek agreed to re-open the Austrian-Czech border for people who work in health or social services. The country closed its borders in mid-March after declaring a state of emergency. (Philipp Grüll | EURACTIV.de)

Economic damage. The coronavirus pandemic is causing weekly economic damage of 0.55% of Belgian GDP or €2.4 billion, according to calculations by the Federation of Belgian Enterprises (FEB). If the current situation continues for six weeks, it will cost our economy 3.33% of GDP or €14.5 billion. “We’ll survive that,” said FEB chief economist Edward Roosens.

Meanwhile, according to KU Leuven virologist Marc Van Ranst, it may take another year before we can speak of a ‘normalization’ of the current situation. Alexandra Brzozowski has more.

After-ski parties cancelled. While ski resorts will remain open during the Easter break, after-ski parties will be cancelled and ski lifts must not be too crowded. EURACTIV’s Pekka Vänttinen has more.

Parliament shuts down. The UK Parliament has shut down until 21 April after emergency laws to deal with the coronavirus pandemic were rushed through both Houses and passed into law on Wednesday (25 March). EURACTIV’s Benjamin Fox reports from London.

Postal workers to the rescue. Postal delivery workers in Ireland will start ‘checking in’ on elderly and vulnerable people amid the COVID-19 outbreak by knocking on doors and checking if those in need require food or medication. Samuel Stolton has the details.

Spain now has second-most COVID-19-related deaths. While Spain has become the second-deadliest hotspot for COVID-19 after Italy, after its death toll reached 3,434 on Wednesday (25 March). The head of the country’s emergency health department, Fernando Simon, said that “we are close to the peak, if we are not already there”. EURACTIV’s partner EFE has the story.

In other news, European Commission President Ursula von der Leyen announced on Wednesday (25 March) the delivery of protective gloves, masks and overalls secured by the EU for Spanish hospitals in within two weeks. Von der Leyen also said that Spain could be eligible for €11 billion from the bloc’s emergency coronavirus fund and that €20 billion had already been approved to help protect small businesses and the unemployed. EURACTIV’s partner EFE takes a look.

Increase COVID-19 testing. As Portugal recorded 2,995 confirmed COVID-19 cases and 43 deaths as of Wednesday (25 March), doctors called for an increase in COVID-19 testing and the taking of random samples in all regions of the country by calling for the “criteria to be extended”. PM Antonio António Costa said on Tuesday in parliament that the scientific community does not want “a generalised COVID-19 test”. (Lusa.pt)

History will judge us. Addressing parliament, Italy’s PM Giuseppe Conte called for responsibility in this “unprecedented emergency for Europe and the whole world”. “Will we be up to it? History will judge us,” he said. The number of coronavirus infections is slowly decreasing in the country, with new 3,612 cases compared to Tuesday. The death toll has climbed to 7,503.

While Conte signed together with other 8 EU leaders a plea for coronabonds, former European Central Bank governor Mario Draghi has stepped in the debate with an OpEd on the Financial Times. “It is already clear that the answer must involve a significant increase in public debt,” he wrote. (Gerardo Fortuna)

Wage cuts. Labour unions have lashed out against the Greek government over a wage-reduction provision which stipulates that for a 6-month period, all businesses can employ 50% of their employees for two weeks per month, giving them 50% of their wages.

The provision is aimed to avoid layoffs and encourage part-time or rotational employment due to the coronavirus crisis. Today the labour ministry is expected to provide clarification on the measure. (Sarantis Michalopoulos)

Transit to Turkey stopped. Bulgarian authorities banned entry into Turkey on Wednesday (25 March) for transit trucks from 67 countries. The order was issued by Health Minister Kiril Ananiev as part of the COVID-19 state of emergency. The measure resulted in a 40-kilometre-long queue of trucks. By Wednesday evening, after negotiations between the two governments, the border was re-opened. (Krassen Nikolov | EURACTIV.bg)

Romania to suspend loan repayments. Romania’s government will discuss in its Thursday meeting a new round of measures to support the economy in the wake of the COVID-19 outbreak. The headline measure presented by Finance Minister Florin Citu would suspend loan payments by up to nine months for both individuals and companies. The minister said every borrower should be entitled to ask the bank for a delay in paying back their loans, and there should be no extra interest. (EURACTIV.ro)

95% of companies suffering due to COVID-19. A survey by the Croatian Chamber of Commerce (HGK) covering more than 2,700 companies showed that 95% of companies had reported declines in turnover and that 28% had suffered declines of up to 100%, due to the COVID-19 outbreak, state news agency HINA reported.

The tax administration received about 2,000 applications for tax deferral on the day the government put this measure in place, and about 14,000 businesses applied to the Labour and Pension System to provide the minimum wage for 71,000 workers. Coronavirus will be a ”very strong blow to the economy’’, the Minister of Finance Zdravko Maric said. Karla Junicic reports from Zagreb.

EU allows Serbia to repurpose €94 million to fight COVID-19. The EU has decided to approve the repurposing of €94 million originally allocated to different projects under the Instrument for Pre-Accession Assistance (IPA), which can now be used to prevent and curb the spread of the new coronavirus, the Serbian government reported on Wednesday (25 March). EURACTIV Serbia reports.

EU and US in opposite camps as Kosovo government toppled. Kosovo’s government was toppled by a no-confidence vote Wednesday (25 March) less than two months after coming to power, plunging the unstable democracy into political uncertainty as it tries to halt the spread of coronavirus. Read more.