People protest after the MSC cruise ship Opera collided with a tourist boat, in Venice. [EPA-EFE/MEROLA]

A near tragedy in Venice on Sunday (2 June) has once again shown how Italy’s co-ruling parties are more and more at loggerheads after last week’s EU elections shifted the government’s balance of powers towards Matteo Salvini’s far-right Lega party.

A 65,000-ton cruise ship smashed into a tourist boat with 110 passengers on board on one of Venice’s busiest canals yesterday morning. The massive vessel lost control and was unable to halt its momentum, ramming first the boat and then the quay.

Four tourists from Australia, New Zealand and the US, aged between 67 and 72 years old, were injured, although not critically, the Veneto region’s governor, Luca Zaia, officially reported.

“I heard the ship horn blaring, I ran into the street and I saw some of the passengers [of the tourist boat] dived into the water, frightened,” a witness who lives nearby told news agency Ansa.

5 people injured after a cruise ship crashed into a tourist boat on one of Venice’s busiest canals. pic.twitter.com/62Upc3hUI5

The harshest comments came from Five Star’s co-ruling party, Lega, proving once again the build-up of tensions within the government majority after the EU elections.

“I understand that a solution to avoid these kinds of accident has been already developed last year, with the enlargement of a channel in Porto Marghera,” Lega leader Matteo Salvini said during a party rally in Tivoli.

“But the project has stalled for months, as we received a ‘no’ from a ministry in Rome. And it wasn’t a ministry held by Lega,” he added.

Later on, Five Star sources replied to Salvini’s comment: “We always hear from Lega that they have a solution to everything, but so far there has never been a proposal on the table from them.”

“If Lega has a plan to solve everything tomorrow, they should present it. We are not jealous: if the plan is good, we will carry out,” the Five Star source added, throwing down a challenge to their coalition partner.

The outcome of the European elections seems to have had an effect on the stability of the Italian government, as the risk of a political crisis has not been quelled so far.

The balance of power between Italy’s two ruling parties has been turned around: Lega doubled its score from last year’s 17.35% to 34.3%, while Five Star crumbled from 32.68% to 17%, after just one year in government.

In the aftermath of the elections, Salvini promised not to dissolve his ruling coalition with Five Star or to reshuffle the government.

“At the national level, nothing will change. My word is worth more than some votes,” Salvini said, adding that his enemy was the centre-left Democratic Party, not Five Star.

However, he has not stopped campaigning for Lega, as the Tivoli rally demonstrates, and so could be tempted to cash in after the outstanding election performance and go for a snap election in September. Attacks against Five Star are everyday occurrences as well.

Now that Five Star supporters confirmed Luigi Di Maio as their political leader through the party’s e-voting platform Rousseau, any potential tension could lead to a political crisis.

Prime Minister Giuseppe Conte is expected to hold a press conference later today, to prevent the exacerbation of the crisis.

Cruise ship traffic into Venice’s lagoon is a long-standing issue in Italy and for years local activists “No Grandi Navi” (no big ships) has fought for a ban.

Former mayor of Venice Massimo Cacciari said that the risk of a tragedy has been reported for over 20 years but many governments completely ignored it.

According to Cacciari, the solution is to start sending ships through the channel used by oil tankers in Porto Marghera and then carry passengers to Venice by bus.

Five Star’s Toninelli warned that a solution involving Porto Marghera could lead to the risk of a crash between cruise ships and oil tankers.

For the WWF, what happened is an alarm bell. “The ship involved in the collision has a gross tonnage of 65,000 tons. What would have happened if the accident had occurred 500 metres earlier, near San Giorgio?” said the NGO in a statement, adding that the time has come to make Venice safe.

In a recent interview with EURACTIV, the head of Italian cruise operator Costa Group Michael Thamm said that the industry already started to find other solutions to minimise the impact of the ships in Venice by working with the government.

“Venice is an example of what happens when tourism is badly managed,” he said, adding that “a lot of actions are underway”. 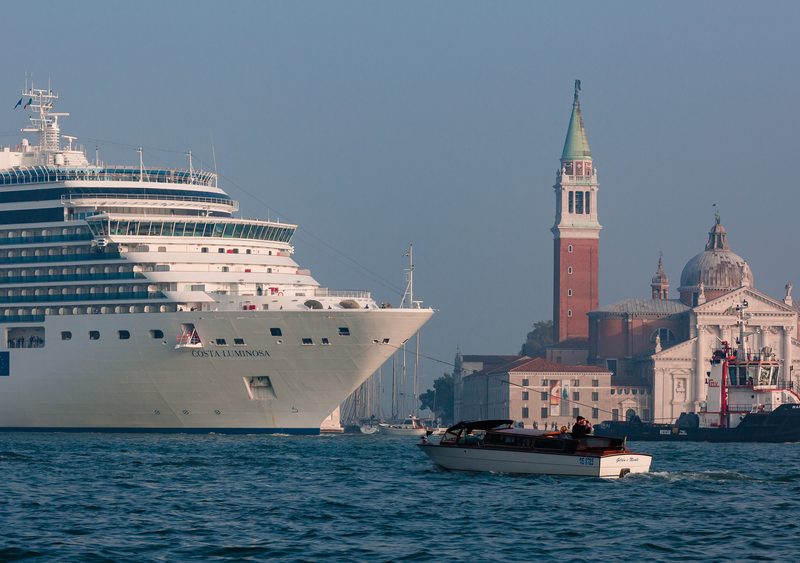