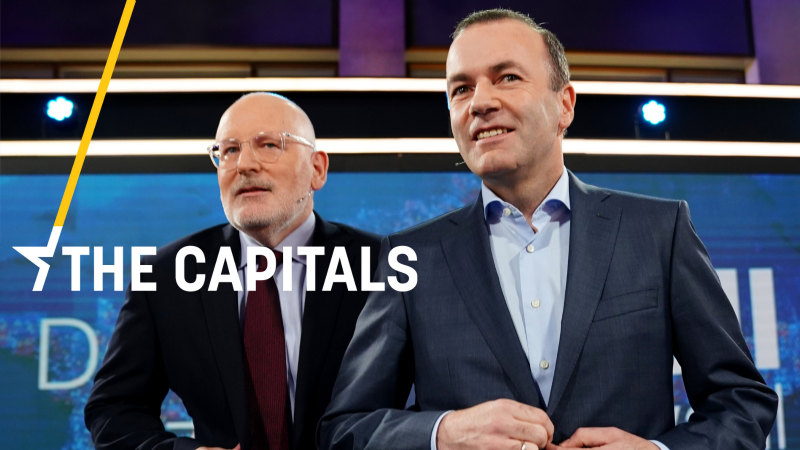 The Capitals is EURACTIV's daily newsletter from across Europe. [ALEXANDER BECHER/EPA]

The conservative European People’s Party again won the most seats in the European elections on Sunday (26 May) but will face difficulties in building a controlling majority as the Greens, liberals and populists posted big gains, reflecting the ongoing divisions in the bloc.

Remain / Leave divisions. Nigel Farage’s Brexit party stole the show in the EU elections polls, whilst pro-Remain parties also made substantial gains – shining a light on the extent of the UK’s divisions. Farage’s party claimed 32% of the vote and are due to win 29 seats. (Samuel Stolton, EURACTIV.com)

While the Green wave stays out of the cities, the Belgian federal parliament has “never been so massively Flemish-nationalist” with N-VA remaining the largest Flemish party and Vlaams Belang jumping from three to eighteen seats. Although the MR party of Prime Minister Charles Michel came second in Wallonia’s elections, pundits suggest he might be out of a job soon.

At EU level, the country swings even more to the right with Vlaams Belang winning three seats, at the expense of Flemish nationalist N-VA and liberal Open VLD, each losing one seat. (Alexandra Brzozowski, EURACTIV.com)

Greens flying high. The Greens from Bündnis90/Die Grünen won big in Germany. They nearly doubled their seats and came in second with 21%, ahead of the Social Democrats. Conservative CDU/CSU, although it haemorrhaged support, remains Germany’s strongest political force. For Social-Democrat party (SPD) top candidate Katarina Barley, the EU elections ended up being a fiasco: the party reached just over 15% compared to 27.3% five years ago.

Jordan Bardella, head of RN’s EU list, said he planned to build a powerful group in the EU Parliament. Stanislas Guerini, a delegate of LREM, said Renaissance would build a big EU group with the centre at the EU House while joining ALDE.

“The European Parliament has been sleeping lately. The two big groups have not made things move at EU level. We plan to build a central group that will be crucial. We will build majorities around ecological transition,” he said.

The Greens scored 13.1% while the centre-right Les Républicains (EPP) got 8.2%. “Voters have preferred the ones who always fought for ecology,” Green MEP Yannick Jadot said.

Despite the polls’ projections, the Socialists and Mélenchon’s leftist France insoumise will also be represented in the next EU Parliament with 6.4% and 6.3% respectively. The Yellow Vests didn’t manage to have anyone elected and seems to have fed the extreme-right rather than extreme-left. (EURACTIV.fr)

Also in the regional and local elections, held on the same day, the PSOE obtained a clear victory over its main rivals confirming socialist PM Pedro Sánchez’s leadership, after his victory in the April general elections. (EuroEFE.EURACTIV.es) [More]

Salvini triumphs. For the first time ever, Lega has become the first party in Italy to get 34.5% of the votes, followed by centre-left Democratic Party which exceeded expectations with around 23%.

‘Decisive battle’ in autumn. With a record 43% turnout – the highest since the country joined the EU in 2004 – Poland’s conservative ruling Law and Justice party (PiS) came narrowly ahead of the centrist European Coalition in Sunday’s vote, seen as a litmus test before parliamentary elections later this year.

PiS won 43.1% of the vote compared to 31.8% five years ago – its strongest result at any election. Meanwhile, the opposition European Coalition comprising the Civic Platform (PO), formerly led by EU Council President Donald Tusk, and a group of leftist and rural parties reached 38.4%. This means 28 seats for PiS, 21 for the EC and three for Wiosna. (Alexandra Brzozowski, EURACTIV.com / Łukasz Gadzała, EURACTIV.pl)

Kurz wins. The centre-right People’s Party (ÖVP) of Austrian Chancellor Sebastian Kurz is on course for gains in the European elections, with the far-right Freedom Party coming third, according to a media forecast published on Sunday (26 May).

Government parties lose.  The coalition of new pro-European parties Progressive Slovakia (ALDE) & Together (EPP) won the EU elections in Slovakia, getting 20% of the vote and electing four MEPs: two will go to ALDE, two to EPP.

Socialist Smer-SD (PES) got 15.7% and will have three seats in the EU House while neo-fascist LSNS scored 12% and managed to elect two MEPs. Two more seats will go to the Christian Democrats (EPP), although one only after Brexit, and to SaS (ECR). OĽaNO (ECR) will have one MEP, who is of Roma origin. (Zuzana Gabrižová, EURACTIV.sk)

Social Democrats disappear. The governing ANO party (ALDE) won the EU elections with 21.18% and got six seats. It was followed by Civic Democrats led by ECR Spitzenkandidat Jan Zahradil (14.54%, four seats), while the Pirates and the pro-European coalition of TOP 09 and Mayors and Independent (EPP) got three seats each.

Far-right Freedom and Direct Democracy (9.14%) and Christian Democrats (7.24%, EPP) got two seats while the communist party (6.94%) elected one MEP. The Social Democrats won’t be represented in the next EP, losing all four seats.

Meanwhile, the referendum called by President Klaus Iohannis to stop changes in the anti-corruption laws has reached a turnout of more than 40%, safely above the minimum 30% requirement for its validation. Voters were asked two questions: if they want to ban the government from changing judicial legislation via emergency decrees and whether they want a national ban on any amnesty and pardoning for corruption-related crimes.

“This is a clear vote for correct politics, for true justice. No politician can ignore your clear vote for an independent judiciary,” Iohannis said. The referendum is non-binding, but Iohannis has previously said the result will “send a clear signal” to politicians.

Romania has repeatedly locked horns with the European Union over a series of judicial reforms proposed by the PSD ruling party, which Brussels thinks will hinder the fight against corruption. (EURACTIV.ro)

In parallel, New Democracy candidates were the big winners of the local and regional elections as well, dealing another severe blow to Tsipras government.

Conservatives’ narrow victory. Ruling DHSY (EPP) came first with 29% (two seats), followed by AKEL (EU Left) with 27.49% (two seats). DHKO (S&D) got 13.8% and keeps one seat, as well as EDEK (S&D) with 10.6%. Nationalist ELAM with 8.25% loses its seat. The results will make little impact on the political landscape in Cyprus. (Theodore Karaoulanis, EURACTIV.GR)

Borissov the winner. Bulgarian PM Boyko Borissov’s GERB party (EPP-affiliated) won the European elections despite the scandals in which it got involved in recent months. GERB won 30.5%, against 25% for its arch-foe BSP, the Bulgarian Socialist Party (PES-affiliated). As expected, third is the mostly ethnic Turkish DPS, the Movement for Rights and Freedoms (ALDE-affiliated), with 14.5%. The nationalist VMRO party got 7.7%, and the centre-right Democratic Bulgaria 6%. This translates into 7 MEPs from EPP, 5 for PES, 3 for ALDE and 2 for a Eurosceptic group.

Pundits say Borissov made a big personal contribution to the victory, as he got involved very actively in the campaign some 10 days ago when polls were still giving an edge to BSP. Sergei Stanishev, PES leader and fifth on the BSP list, blamed party leader Kornelia Ninova for what he saw as a strategic mistake. BSP MPs left the National Assembly in February and since then have been widely invisible to the public. (Georgi Gotev, EURACTIV.com)

Croatia’s ruling conservative party, HDZ (EPP), only managed to tie with the opposition SDP (S&D) on four seats, after counting on winning six.

PM Andrej Plenković handpicked the candidates and this defeat will make it harder for him to reform HDZ into a centrist party as the right-wing faction will be stronger and louder. Plenković said that “what has happened is obviously a great dispersion of voices. In such circumstances, it is obvious that some 1,000-1,500 votes were missing for the HDZ for the fifth mandate. I’m not happy with that, but I am pleased that we have gone independently”. (Željko Trkanjec, EURACTIV.hr)

Everything was as expected. Janez Janša and his EPP coalition (SDS and junior partner SLS) is the winner of the election – like in the parliamentary election in June last year when he won but did not the have coalition potential to form a government. Social democrats confirmed that they are always here, second or third. And the leading party in the ruling coalition, LMŠ (ALDE), came third. So, nothing new on the sunny side of the Alps. (Željko Trkanjec, EURACTIV.hr)