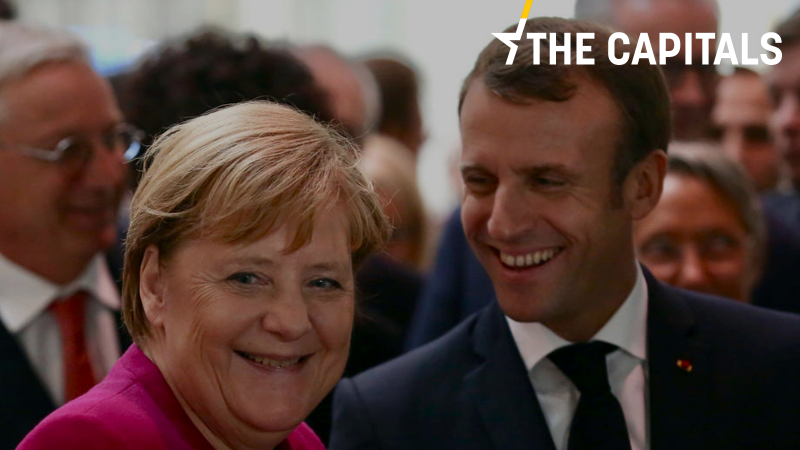 At a moment where everything seems fragile, Berlin and Paris have decided to take a step back from their differences and show unity. [EPA/MAXPPP OUT]

Before you start reading The Capitals, take a look at an op-ed written by Dacian Cioloș, the president of Renew Europe. “Without us, there might be a majority to reject progress but no majority to build and push Europe forward. We want to use this strength to break the status quo, to build a new Europe,” he said.

At a time where everything appears to be fragile, from a looming Brexit and increased migration to Turkey’s invasion in Syria and the US-China trade spat, Berlin and Paris have nonetheless decided to put their differences aside and show unity.

The two heads of state agreed on a common roadmap on a number of issues, including arms sales and defence, while having lunch inside a stationed Airbus aircraft in Toulouse. Merkel said both countries concluded an arms export agreement “after long negotiations”.

According to Merkel, the federal cabinet will soon adopt the new rules with the support of Germany’s Social Democratic Party (SPD), meaning that the issue will not divide the so-called Grand Coalition. She said the agreement had been negotiated under the leadership of Foreign Minister Heiko Maas (SPD). “In this respect, the agreement wasn’t concluded against the will of the SPD”, she added.

EURACTIV’s Alexandra Brzozowski writes that the agreement comes only days after the lack of a common position over an EU-wide arms embargo pushed for by Germany and France became evident after EU foreign ministers expressed a readiness to curb exports of weapons to Ankara but stopped short of common action.

“We have finalised a major, legally binding agreement that will regulate arms exports in the future and will also refer to our joint armament projects,” Macron told a press conference in Toulouse.

Next-generation European fighter jet cooperation is seen as a first step to developing a European defence industry and reduce reliance on US equipment.

They also talked about climate change, once again mentioning a minimum carbon price, and called for the support of Ursula von der Leyen’s Green New Deal.

Macron also called on European competition authorities to initiate “as soon as possible all possible proceedings” against digital platforms that do not comply with the rules on “neighbouring rights”, which allow better remuneration for press publishers.

“Some actors like Google want to free themselves from it. We will not let this happen and very clearly ask national and European competition authorities to examine and initiate as soon as possible all possible procedures and beyond,” Macron told a press conference.

“We must show that … we, Europeans, Germany and France in particular, are defending our common values and interests,” Macron added.

There was also a rapprochement on the issue of the EU accession negotiations with Albania and Northern Macedonia. Both sides agreed that the countries of the Western Balkans need such a perspective, Merkel said. But she also supported France’s desire to reform the accession process. Paris has vowed to block the start of EU accession talks with Skopje and Tirana.

The two leaders also demonstratively defended Europe’s industry against attacks from third countries. In the face of US punitive tariffs on EU products, they backed the aviation and arms group Airbus.

Many other joint projects were launched during the meeting. For example, citizens and civil society initiatives from Germany and France will be able to start applying for funding from a new Franco-German citizens’ fund starting in 2020. The aim of the fund is to initiate and support joint Franco-German projects.

EXCLUSIVE: Any Brexit deal struck by Prime Minister Boris Johnson will need to be put to the British people in a referendum if it is to pass the UK parliament, a cross-party group of UK lawmakers told EURACTIV on Wednesday (16 October).

Trump will not be tough with Italy. After a bilateral meeting with Italian President Sergio Mattarella in Washington, US President Donald Trump said his country would carefully consider  Italy’s complaints about the punitive tariffs against EU countries.

The US President added that he does not want to be tough with Italy, as the relationship with Rome is excellent. Mattarella’s wish would be to seek some kind of collaborative dialogue soon, so as to avoid tensions between the two sides of the Atlantic. (Gerardo Fortuna| EURACTIV.com)

The EU credibility at stake. “If we do not open negotiations with both countries (Albania and North Macedonia), the EU will lose its credibility and break its promises”, said Slovenia’s Foreign Affairs Minister Miro Cerar before the Parliamentary Committee on Foreign Affairs.

By delaying a decision to open negotiations, the EU could become co-responsible for the possible worsening of the political situation in North Macedonia and beyond, according to Cerar, adding that he regrets France blocked that decision.

Similarly, at a meeting with EU Commission chief Jean-Claude Juncker, former PM and leader of the main opposition Syriza party (EU Left), Alexis Tsipras said that it was crucial to start EU accession talks with North Macedonia, as it is a matter of the EU’s “international credibility”. He also called on the EU to activate the sanctions against Turkey it agreed on at the EU Council Summit in June to address Turkey’s illegal activity in the Cypriot Exclusive Economic Zone. (Željko Trkanjec |EURACTIV.hr)

Meanwhile, North Macedonia’s PM Zoran Zaev warned the EU that if the EU accession negotiations with Skopje would not start now, then Brussels should not expect a solution to the Kosovo issue, as it will show that it did not appreciate the name change deal with Greece concluded under the so-called Prespa Agreement.

“Everybody says that the Prespa Agreement is, for now, one of the best agreements in the Western Balkans. If the EU ‘punishes’ this agreement and North Macedonia by postponing the accession negotiations, how can it be expected that Aleksandar Vučić and Hahsim Thaçi will find the solution for the issue of Kosovo? And how it will motivate the leaders of Bosnia and Herzegovina to find the solution for the formation of the government?” Zaev told Tanjug.

Sex education. Poland’s parliament is putting forward a bill that will criminalise “the promotion of underage sexual activity”, which effectively means banning sex education in schools. Although it is not a mandatory subject at school, the topic is nonetheless discussed during other courses. The bill, which envisages up to five years in prison for teaching sex education, will now go to a commission for further amendments. Hundreds of Poles protested against the bill in front of the parliament and in many cities.  (Łukasz Gadzała | EURACTIV.pl)

The leak of leaks. The recordings on which the infamous “Gorila file” – describing high-level corruption from the 2000s in Slovakia – is based, have now been made available to the public. Several media outlets received a link, where the 39-hour long file can be downloaded.

The Gorila audio was found in the house of Marián Kočner after he was arrested and the national crime agency has been analysing it since. The outgoing leader of the investigation team recently said that a phonetic analysis confirmed the recording’s authenticity. The recording itself had not been publicly accessible so far. But the financial group Penta, which is at the centre of this corruption scandal, is preparing a lawsuit, and Slovak politics, more generally, have been in turmoil, especially after other recordings were leaked this week. (Zuzana Gabrižová |EURACTIV.sk)

Prague will submit a proposal for joint EU measures against Turkey because of its attack against Kurdish-held territory in northern Syria, PM Andrej Babiš (ANO, RE) told lawmakers of the EU affairs committee ahead of the European Council (EUCO) summit, which will take place on 17-18 October. However, Babiš expressed his doubts on whether Germany would support such an initiative because Turkey is a key export market for the German arms industry. The Czech government has already halted its arms exports to Turkey. (Aneta Zachová |EURACTIV.cz)

€200 million to solve the government crisis. Prime Minister Andrej Plenković (HDZ – EPP) has announced a 6.12% rise of wages for public servants next year to solve a looming government coalition crisis. According to Croatian media, the government will need around €200 million. However, this will lead to the postponement of the planned reduction of the standard 25% VAT rate by one percentage point, set for 1 January 2020.

The two main coalition partners (HNS – RE and a party of Zagreb mayor Milan Bandić) said they would remain in government and, therefore, Plenković put a stop to a snap elections scenario, which could have affected Croatia’s EU presidency due early next year. Analysts criticised the decision, saying that the main problem is that the public sector will not become more efficient because the wage hike is linear.

Measles only in Zagreb. The Croatian Institute for Public Health (HZJZ) has so far received reports of 51 people suffering from measles in Croatia. According to reports, new patients come exclusively from Zagreb, with eight of them coming from two related families, in which no one has been vaccinated. (Željko Trkanjec |EURACTIV.hr)

Medvedev in Belgrade. Russian PM Dmitry Medvedev will be in Belgrade on 19-20 October. He will meet with Serbian President Aleksandar Vučić and PM Ana Brnabić to discuss bilateral trade, economic, cultural and humanitarian relations. Medvedev will take part in the celebration of the 75th anniversary of the liberation of Belgrade. (EURACTIV.rs)

One response to “France and Germany show unity amid storm”