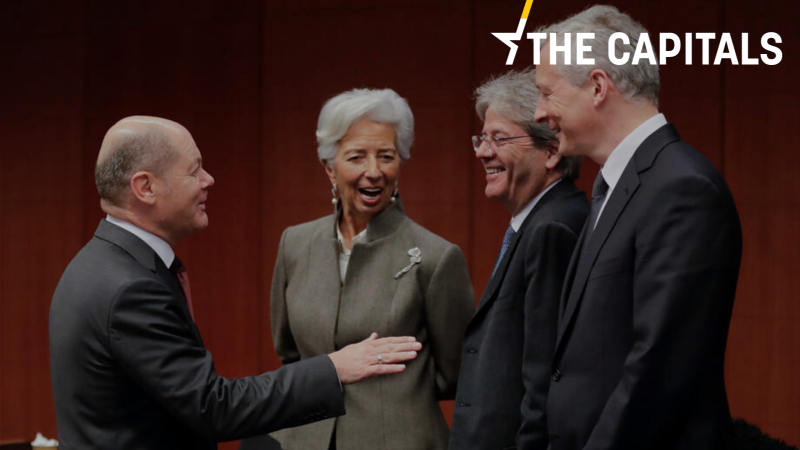 France cannot understand the German stance while The Hague is still at odds with Rome over ESM's conditionality. In addition, what's the position of European Commission Vice-President Margaritas Schinas on the issue? [EPA/OLIVIER HOSLET]

Before you start reading today’s edition of the Capitals, feel free to have a look at the article “Coronavirus to weigh on every aspect of Germany’s EU presidency” by EURACTIV Germany.

PARIS. France is not ruling out the idea of issuing debt with other European countries and could set up a coalition of motivated countries in the event of a German veto, an Elysian source told Reuters agency. The idea of a coalition initially floated by Pascal Lamy could yet make its way.

While the Eurogroup is divided over the management of the health crisis, France supports the need to back Europe’s economies hardest hit by the coronavirus crisis such as Spain and Italy, which are also among the most indebted countries in Europe.

France cannot understand the German stance while the Dutch government is still at odds with Italy over the European Stability Mechanism’s (ESM) conditionality. In addition, what’s the position of European Commission Vice-President Margaritas Schinas on the issue?

Read the story by EURACTIV France and Sarantis Michalopoulos here.

Optimism despite the crisis. While the coronavirus pandemic continues to hit Germany and the rest of the world, economic experts foresee a quick recovery after the country suffers a severe economic recession this year, as part of their biannual spring forecast published on Wednesday (8 April). Read the full story by EURACTIV Germany’s Philipp Grüll.

In other news, Germany will be receiving up to 50 unaccompanied minors from the Greek islands next week, Interior Minister Horst Seehofer of the Christian Social Union (CSU) announced on Tuesday (8 April). (Christina Goßner  | EURACTIV.de)

Antibody testing to start by the end of April. Health Minister Rudolf Anschober (Greens) said in a TV interview on Wednesday (8 April) that the government will roll out antibody tests by the end of April. This will play a crucial role in the government’s COVID-19 exit plan, it was explained in Monday’s press conference led by Austria’s four-man coronavirus crisis team.

By 13 April, the lockdown will be eased as small shops reopen (under strict hygiene rules), while bigger shops and then restaurants are set to follow in May. In parallel, the government will enact a containment strategy, which will consist of isolating infected persons, testing suspected cases, and tracking infections, while antibody tests will reveal who is already immune. (Philipp Grüll | EURACTIV.de)

SMEs in trouble. Up to 30.8% of Belgium’s small and medium enterprises (SMEs) may not survive the COVID-19 crisis if the current far-reaching measures to combat the pandemic continue, according to estimations by Belgian bank Belfius. Alexandra Brzozowski has the details.

Bailout for charities. The government on Wednesday announced a £750m package to keep struggling charities afloat during the coronavirus pandemic. The move by Chancellor Rishi Subak follows increasing concerns that some charities are facing collapse as a result of collapsing income because of cancelled fundraising events and enforced shop closures as part of the lockdown. EURACTIV’s Benjamin Fox reports from London.

Compensation for those forced to stay at home. Finland’s social affairs and health ministry is now preparing a bill to ensure those who have been forced not to work and stay home due to the coronavirus receive compensation for loss of income. Pekka Vänttinen has more.

Italy goes all-in on eurobonds. In an interview with the German tabloid Bild, Italy’s PM Giuseppe Conte reiterated his previous call for European action instead of national responses to deal with the COVID-19 pandemic. But this time he raised the stakes, adding that if the EU isn’t up to the challenge, Italy “must absolutely quit the European dream.”

According to Conte, if Europe does not give itself financial instruments equal to the challenge, such as eurobonds, Italy will be forced to face the emergency and start again with its own resources. “I don’t have to convince the Germans; they have to convince themselves. At the end of this situation, we can’t say that the operation was successful but the patient is dead,” Conte added. (Gerardo Fortuna | EURACTIV.com)

WHO lauds ‘heroic’ COVID-19 response. Spanish health authorities reported another upsurge of new coronavirus cases and daily fatalities but also recoveries on Wednesday as the World Health Organisation commended the country’s “heroic” response to the pandemic, EURACTIV’s partner EFE has reported. Although 757 people died from the coronavirus in the last 24 hours bringing the death toll to 14,555, according to the Spanish health ministry, 32% of the 146,690 tested positive for the virus had recovered, with 4,813 recoveries in just the last 24 hours. Read the story here.

New minister wants Slovakia to help most affected countries. New Foreign and European Affairs Minister Ivan Korčok took office on Wednesday (8 April) after 14 days of self-isolation as part of the compulsory quarantine after returning from the US, where he had served as Slovak ambassador for the past two years. Korčok tackled the corona pandemic in the EU at his first press conference saying that “we are sad and moved by the tragedy that our partner nations are going through, naming Italy, Spain and France”.

“We need to think in the EU how we can help them, including how, with the limited possibilities we have, Slovakia can help. I do not see this as a political gesture but as a sign of being European,” he added. (Zuzana Gabrižová | EURACTIV.sk)

Confusion over exit strategy. The Czech Republic has managed to stop COVID-19 and can start returning to normal, Health minister Adam Vojtěch said yesterday (8 April). Almost at the same time, Interior Minister Jan Hamáček said it would be too early to release the restrictions. This is not the first time government officials have given the media contradictory information in the past few weeks. (Ondřej Plevák | EURACTIV.cz)

Opposition to challenge anti-corona package. Four centre-left opposition parties will send to the Constitutional Court immediately after Easter a request to review Article 103 of the government’s anti-corona package, leading newspaper Delo reports. The Article gives police wider powers to control the epidemic and ensure compliance with restriction measures, and the package is scheduled to be published in the Official Journal on Friday (10 April) as part of a €3 billion programme to tackle the aftermath of the epidemic.

The opposition warns that under Article 103, the powers that allow police to access sensitive personal information were defined too broadly and not merely to ensure compliance with specific restriction measures. (Zoran Radosavljevic | EURACTIV.com)

Fired bankers. Prime Minister Boyko Borissov has ordered Economy Minister Emil Karanikolov on Wednesday (8 April) to dismiss the managing board of the Bulgarian Development Bank, which is 99.99%-owned by the Bulgarian state. Through this bank, the government will support SMEs with a significant amount of money during the crisis. The reason for the PM’s order was that the bank gave a loan of €38 million to a company with a €1,000 revenue in 2019. (Krassen Nikolov | EURACTIV.bg)

Western Balkan Summit postponed. Prime Minister Andrej Plenkovic and Defence Minister Damir Krstičević expressed their satisfaction on Wednesday (8 April) with the work of people working for homeland security in the context of the COVID-19 pandemic and the Zagreb earthquake after the meeting of the Council for the Coordination of Homeland Security.

In other news, Serbia has one of the highest prison mortality rates in Europe, according to the Council of Europe Annual Penal Statistics (SPACE). The mortality rate among Serbian inmates has significantly risen, jumping from 32.4 to 51.5 people per 10,000, which puts Serbia high on the list of countries with the highest death rates in prisons. Read more.