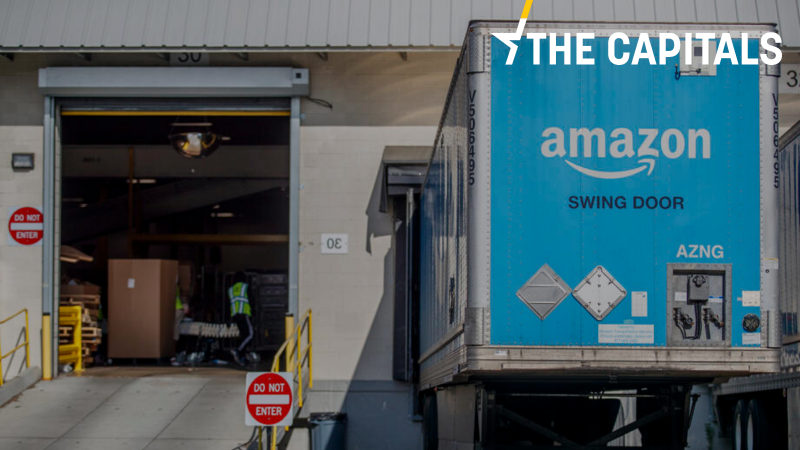 The trade union that filed the complaint last week said Amazon was continuing to work during the pandemic “as if nothing was happening” and decried the situation in the warehouses as a “sanitary and social bomb”. [EPA/SHAWN THEW]

DOCUMENT of EU exit from COVID-19: The exit from COVID19 containment measures should be evidence-based, gradual and coordinated between member states. But a ‘game-changing’ vaccine against COVID-19 could still be a year away.

**To stay up-to-date on everything to do with the coronavirus across the capitals, feel free to check out EURACTIV’s comprehensive overview, which is regularly updated with the help of our network of offices and media partners.

PARIS. Amazon was asked by a French court to restrict its deliveries to essential goods only until an assessment of the epidemic risks can be carried out. The court in Nanterre, near Paris, said in its ruling that “the company obviously ignored its obligations to the security and health of its workers”. EURACTIV France reports.

A slowdown, not containment. The president of the Robert Koch Institute, Lothar Wieler, cautioned against an overly optimistic view of Germany’s social distancing measures in a press conference on Tuesday (14 April). “We cannot yet speak of containment. We see a slowdown,” he told reporters. He also encouraged continued adherence to the government guidelines, given the “relatively high levels of infection” and no clear evidence of it decreasing.

This message comes before today’s teleconference between Chancellor Angela Merkel (CDU) and the 16 state premiers about potentially relaxing the restrictions on public life. When asked, Wieler refused to be drawn one way or the other, simply saying “what will be decided tomorrow, I cannot tell them.” (Sarah Lawton | EURACTIV.de)

Austria opens first stores. Launching the exit strategy laid out last week, the government allowed certain shops to re-open on Tuesday. These are small stores (under 400 square meters) as well as home-improvement centres. Some observers worry that this might lead to a spike in new infections. In a press conference, health minister Rudolf Anschober (Greens) said that the daily rate of new infections fell to a record low of 0.8% between Monday and Tuesday. On Wednesday, the government will present updated rules – likely to be looser – for sport and cultural events. (Philipp Grüll | EURACTIV.de)

Belgium to follow France on lockdown-length? Belgium’s National Security Council is set to decide this evening whether and until when the current lockdown measures will be extended. The option of 3 May was floated during the last meeting. However, as France has prolonged to 11 May, Brussels could potentially follow suit. Alexandra Brzozowski has more.

Urpilainen underlines need for aid to developing countries. Jutta Urpilainen, the EU Commissioner for International Partnerships, warns that unless something is done to help developing countries, a second wave of coronavirus will swarm Europe. The EU has not only a moral obligation to assist countries in Africa, Latin America and Asia, it is only in the EU’s own interest, Urpilainen told the Finnish Broadcasting Company in an interview on Tuesday. Pekka Vänttinen reports from Helsinki.

Academics criticise government in open letter. On Tuesday (14 April) twenty-two Swedish researchers, professors and doctors published an open letter criticising the strategy followed by the government and authorities. Printed in the country’s biggest broadsheet, Dagens Nyheter, the group claimed that the policies dealing with the coronavirus have been too lenient and demanded tougher measures including the closing down of schools and restaurants. Pekka Vänttinen has the detail.

First step of new government. Fine Gael and Fianna Fáil have found common ground on a joint policy document which could bring the two a step closer to forming a coalition government, following talks between their respective leaders Leo Varadkar and Micheál Martin on Tuesday. Irish news agency RTE reports that the two leaders stated their commitment to forming a majority government consisting of three or more parties, over a period of five years. The text will be circulated among both Parliamentary parties on Wednesday, in a bid to contract their approval for the plans.

Irish DPC Zoom concerns. Ireland’s Data Protection watchdog is liaising with other data protection authorities in Europe on the security of the US video conferencing software, Zoom.

The Irish Independent reports that Ireland’s Data Protection Commission, headed by Helen Dixon, have become concerned following reports of third-party hacking into the Zoom platform, which has recently surged in popularity as a result of the uptake in home-working.(Samuel Stolton | EURACTIV.com)

ESM splits coalition. Italy’s ruling coalition is split over the use of the resources from the eurozone bailout fund (ESM). Centre-left Democratic Party (PD) and centrist Italia Viva (IV) intend to draw ESM available resources of up to €36 billion for covering the costs of the health emergency caused by COVID-19. On the other hand, anti-establishment party Five Star Movement remains reluctant. Italy’s PM Giuseppe Conte as well has repeatedly described the fund as an inadequate tool, pushing for issuing Eurobonds instead. (Gerardo Fortuna | EURACTIV.com)

Government and employers are in favour of a European strategy for reindustrialisation, the importance of which has been demonstrated by the crisis of the COVID-19 pandemic.

Finance Minister Mario Centeno warned that the year-on-year fall in the second quarter will be “certainly four to five times the maximum that GDP has ever fallen in a quarter. That maximum, he said, was a drop of 4.3% in 2012. The International Monetary Fund (IMF) forecasts a recession of 8.0% for the Portuguese economy and an unemployment rate of 13.9% in 2020. In 2019, GDP grew 2.2% and the unemployment rate was 6.5%.

Portugal has been in a state of emergency since 18 March and the President of the Republic has already announced that it will be extended until at least 1 May. The land borders between Portugal and Spain are to remain closed at least until 15 May. Portugal has so far registered 567 deaths associated with the new coronavirus and 17,448 infections. (Lusa.pt)

Abortion and sexual education. On Wednesday, the Polish Sejm, lower chamber of the parliament, will debate drafts of bills that envisage a drastic reduction of abortion (which already is illegal except for three instances) and limitation of sexual education in schools. The bills have caused controversy, as critics point not only to women rights but also to the bad timing of their introduction during a pandemic. It is unclear whether the governing PiS will proceed with the bills, as it may not be willing to invest heavily in another fight with the opposition, when it already has coronavirus crisis management on its hands. (Łukasz Gadzała | EURACTIV.pl)

Timing is everything. Government plans to present a plan on how to open certain businesses next Monday (20 April). Prime Minister Igor Matovič made it clear that the decision will be based on the input from epidemiologists, not economists. According to the President Zuzana Čaputová, these two opinions do not necessarily stand in opposition and need to both be listened to. Zuzana Gabrižová reports from Bratislava.

Exit strategy revealed. Czech government has published a COVID-19 exit plan that would gradually ease measures in five phases between 20 April and 8 June. From 20 April, farmers markets and craftsmen can open their businesses under strict hygiene conditions. Aneta Zachová has the details.

Bulgarians are not coming home. Prime Minister Boyko Borissov has said hundreds of thousands of Bulgarians are returning to the country from abroad because of the COVID-19 spread in Western Europe and the US. However, a EURACTIV.bg survey based on official data suggests that this is not true.

Police forces to deliver Holy Fire. While still a couple of weeks away from the projected peak of the COVID-19 pandemic, the Romanian authorities have decided that the Holy Week is a proper time to ease the restrictions imposed on free movement. People will still be confined in their home (except for going to work, buying essentials etc), but they get a permission to go to church to take the blessed bread known as ”paste” on Friday and Saturday before the orthodox Easter. Bogdan Neagu has more.
IMF sees Romania economy falling 5% in 2020. The International Monetary Fund expects the Romanian economy to contract by 5% in 2020, a much harsher prediction than its ”sister” organisation, the World Bank, made just last week. However, the IMF estimates the recession will not last, as the 5% decline will be followed by economic growth of 3.9% in 2021. EURACTIV Romania reports.
///

New intelligence chief appointed. The government appointed lawyer and security expert Janez Stušek as the new head of the national intelligence agency SOVA, after its previous head resigned on 17 March, saying he did not enjoy the confidence of the new Prime Minister Janez Janša. Janša’s government also said it would appoint by 15 May the new chief of staff of the Slovenian army. (Zoran Radosavljević | EURACTIV.com)

IMF’s prediction. According to an IMF analysis, the Croatian economy will shrink 9% until the end of the year. Tourism is set to be particularly badly hit. The recovery is expected next year, with estimated growth of 4.9%. IMF foresees a significant unemployment growth in Croatia this year, which could exceed 11.5%, but is expected to fall in 2021 back to 8%.

Croatian gross external debt has been declining since 2015, reaching €40.9 billion at the end of 2019, which is 75,7% of GDP. However, analysts predict that this year it will start growing as a result of the crisis caused by the coronavirus pandemic. (Tea Trubić Macan, EURACTIV.hr)

US congressman, senator seek additional pressure on Serbia over Kosovo. US House Foreign Affairs Committee Chairman Eliot Engel, a Democrat, and New Jersey Senator Robert Menendez, the most senior Democrat of the Senate Foreign Relations Committee, have asked the US administration to pursue its diplomatic support to resolve the conflict between Kosovo and Serbia in “a just way for both countries,” and in accordance with US law and longtime policy, Voice of America (VoA) reported. EURACTIV Serbia has more.

Djuric told the pro-government TV Pink that 75 doctors and 200 nurses would get jobs at three health care centres in Serb-majority areas, adding that the Serbian government has approved the hiring of all unemployed doctors and nurses living in those areas. Djuric also said that the Kosovo Serbs should be talking to the Albanians about ways to tackle the coronavirus pandemic. (EURACTIV.rs  betabriefing.com)