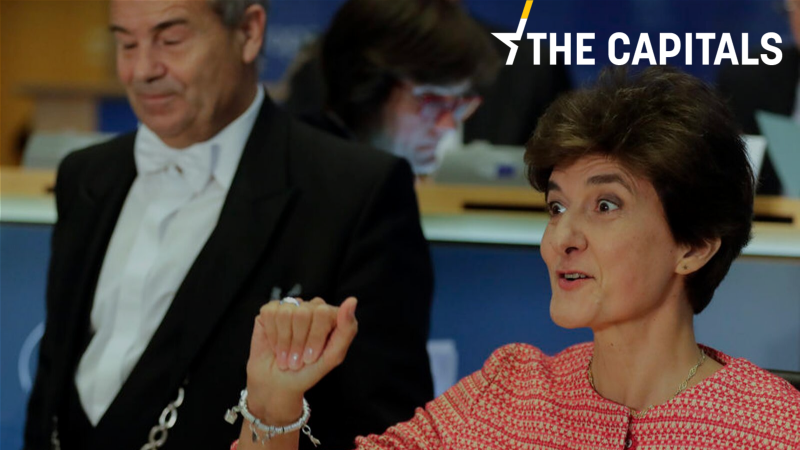 MEPs from rival groups asked more questions about her personal integrity and her past activities rather than her skills to deliver in the new post. [EPA/ OLIVIER HOSLET]

MEPs from rival groups asked more questions about her personal integrity and her past activities rather than about her expertise for the new post.

The former MEP had a brief stint as defence minister before resigning in 2017 over a parliamentary assistants scandal. The case is still under investigation by the European Anti-Fraud Office OLAF and the French authorities. However, the EU body had found no illegal activity and Goulard had to repay approximately €45,000.

But sources told EURACTIV.fr that the reasons behind the attack were politically-motivated.

“It’s a settling of scores, the EPP and Social Democrats have lost their candidates. Now they want to take revenge on a Renew candidate,” said a source in the European Parliament.

The subcommittee of Security and Defence (SEDE) sources were frustrated their MEPs did not get enough questions on defence matters, minding the additional file Goulard is meant to take over with the newly created DG Defence Industry and Space.

Renew Europe’s party leader, Dacian Ciolos, has said he will not enter in any secret negotiations with other political groups, despite it being common practice in the European Parliament.

EURACTIV.fr reports that although Goulard answered in four different languages to MEP questions, the candidate may have to foot the bill for another reason: MEPs’ feelings towards Macron, who has allegedly destroyed the Spitzenkandidatsystem.

Spanish economy grows but unemployment too. The Spanish economy is still growing but at a slower pace, according to acting Economy Minister Nadia Calviño, EURACTIV’s partner EFE reported. Calviño, former Director at DG Budget in Brussels, said the growth of the Spanish economy in 2018 was “more solid” than in previous years, but admitted it is now slowing down, due in part to the US-China trade war.

However, the minister avoided confirming whether the acting socialist government of PM Pedro Sánchez is planning to review the economic growth forecast, currently set at 2.2%, in the draft budget.

But what is currently raising eyebrows in Madrid is the number of unemployed citizens registered in the Public Employment Services (SEPE). In September, the number increased by 13,907 people compared to August figures, the highest increase for September since 2007, EFE reported.

According to data published by the labour ministry on Wednesday (2 September), the total number of unemployed reached 3,079,711 for the month of September.

UK Prime Minister Boris Johnson struck a conciliatory tone towards the EU on Wednesday (2 October) as he set out his government’s new alternative to the Irish backstop. Speaking at the Conservative party’s annual conference in Manchester, Johnson called for “a positive new partnership” between the EU and UK and insisted that he would continue to “work for a deal with our EU friends”.

The new plans appear to have the support of the Democratic Unionist Party but have been met with a cool reaction by the Irish government.

The plans, which are expected to be delivered in person by the UK’s EU Sherpa, David Frost, have received a guarded response from the European Commission.“Once we receive the text we will look at it objectively. We want to enter into constructive discussions,” a Commission spokeswoman told reporters on Wednesday. (Ben Fox, EURACTIV.com)

Dutch-German cooperation. Dutch Prime Minister Mark Rutte and German Chancellor Angela Merkel said in a joint press conference in Berlin on Wednesday (2 October) that both countries agreed on close cooperation on hydrogen, offshore wind energy and security of supply. There will also be closer coordination on the planned Dutch withdrawal from gas production in Groningen, which will also affect Germany’s energy supply. (Claire Stam,EURACTIV.de)

Italy’s Foreign Minister Luigi Di Maio has told US Secretary of State Mike Pompeo in Rome that “the issue of tariffs concerns us. It is very concerning since we have firms that live off exports. Our companies must be able to have certainties, one of them being the trade relationship with the USA”.

According to EURACTIV’s partner ANSA, the Milan stock exchange’s FTSE Mib index shed 2.87% on Wednesday (2 October) after the World Trade Organisation ruled that the US could impose 7.5 billion dollars of tariffs on European goods in compensation for aid granted to Airbus. Read more on ANSA.

‘Mitsotakis writes better than Orban’. Leftist main opposition leader Alexis Tsipras has lashed out against conservative PM Kyriakos Mitsotakis after the latter criticised those who participated in a general strike. “Once again, few are striking and many are suffering,” Mitsotakis said.

New candidate? According to Polish daily Rzeczpospolita, Janusz Wojciechowski, the Polish candidate to take on the agriculture portfolio of the next European Commission, will have to be withdrawn from consideration after his poor performance at the hearing in the European Parliament. Critics suggest that he disappointed a lot of MEPs and Warsaw will most probably have to choose another candidate.

EURACTIV’s agriculture reporter Gerardo Fortuna, wrote: “Wojciechowski spent most of his two-and-a-half-hour hearing on the ropes, taking successive blows from relentless MEPs who went ballistic when the Pole replied ‘I’m open to discussions’ as a mantra to every technical question.”

New party Homeland. Supreme Court Judge and failed presidential candidate Štefan Harabin has launched a new party, despite denying so previously. The party is called Vlasť (Homeland). “I feel that I cannot stand aside anymore,” Harabin told a press conference. He added that it was necessary to protect Slovakia against “junkies” and “paedophiles”.

According to EURACTIV Slovakia, Harabin has been a toxic element for Slovakia’s justice system for a long time, as he has often lied deliberately, bullied non-loyal judges and has continued to seek support from the same voters as the far-right ĽSNS party. (Zuzana Gabrižová, EURACTIV.sk)

V4 presidents in Prague. The presidents of the Visegrád Group (V4) countries gathered in Prague to debate over EU affairs on Wednesday (2 October). Czech President Miloš Zeman said the V4 should be “reasonable”, meaning that it should face the challenges “in a raw way” without any “useless correctness”. Today the meeting will be widened with the participation of the Slovenian and Serbian presidents. (Aneta Zachová, EURACTIV.cz)

State funeral for singer legend. Karel Gott, the most famous and top-selling singer in Czech history, died at the age of 80. He performed all over the world even during Communism. The government of PM Andrej Babiš has suggested and approved a state funeral for him, which is usually dedicated only to important statesmen. The last state funeral was in 2011 when former President Václav Havel died. (Ondřej Plevák,EURACTIV.cz)

Golden passports. Bulgaria will keep selling its citizenship in exchange for investments, despite criticism from the European Commission. However, Sofia plans to impose some restrictions on the so-called “golden passports” scheme. The Balkan country wants to eliminate the sale of citizenship for short-term investments, such as government securities. The purpose is to limit the possibility of fraud. The draft law was approved by the Council of Ministers on Wednesday (2 October) and is due to be submitted to the parliament.

Earlier this year, the Commission announced in а report that Malta, Cyprus and Bulgaria are the only EU countries to sell citizenship. Other countries grant the right of permanent residence for investment, so-called “golden visas”. Spain, Cyprus, the United Kingdom and Portugal have raised the most money under this scheme. According to the Commission, most European countries do not make sufficient checks on the origin of the wealth of people who buy citizenship. (Krassen Nikolov, EURACTIV.bg)

>>Take a look at The Brief we wrote last month on the issue: How the outgoing Cypriot Commissioner got burnt

To read or not to read? Romania’sopposition parties have bickered with the ruling socialist party over the dates set to read and vote on the no-confidence motion. PSD and few of its allies wanted the reading to take place on Wednesday (2 October) so that the vote would be scheduled for Saturday (5 October). But the proponents of the censure motion feared not enough MPs would come to vote on Saturday.

For the motion to pass, which will lead to the dismissal of the government, 233 votes are needed. So, with the help of a few PSD members, the opposition managed to delay proceedings. The reading is now set to take place on Thursday (3 October) and the vote next Thursday (10 October). Read more about Romania’s messy politics here. (EURACTIV.ro)

Although they found that the process has been carried out through open competition, some people were directly appointed. One of them is a lady that was working with PM Šarec while he was a mayor of the Slovenian town Kamnik. “I did not exert any pressure on employment in SOVA, and I neither have nor had any emotional relations with the aforementioned lady,” Šarec tweeted. A Slovenian tabloid, which is allegedly in close contact with leading opposition party (SDS-EPP), named the lady as “pretty N. H.”. (Željko Trkanjec, EURACTIV.hr)

Preserving our ‘way of life’. Croatian President Kolinda Grabar-Kitarović formally announced her bid for a second term in office under the slogan “Because I believe in Croatia” on Wednesday (2 October).

Grabar-Kitarovic said that in her second term she would continue to lead Croatia towards an active and responsible international policy and that she would continue to fight for national sovereignty, security, democracy and the preservation of “our identity and our way of life”. One of the starting points in her new term in office will be “the preservation of the Croatian family”.  (Željko Trkanjec, EURACTIV.hr)

Prague unlikely to revoke Kosovo’s recognition. The recognition of Kosovo’s independence has never had unified support in the Czech society, nonetheless, revoking the recognition of the country cannot be expected, Czech Parliament’s Chamber of Deputies Speaker Radek Vondracek said in Belgrade. He reiterated that the Czech Republic supported Serbia on the road to the EU, because “history has clearly shown that the stability of Europe is impossible without the Western Balkans, while Balkans’s stability is impossible without the inclusion of Serbia.”

Almost a ‘scandal’ over Jacques Chirac’s funeral. Milorad Dodik, a Serb member of the Presidency of BiH, suggested that no one from BiH should attend the funeral of former French president Jacques Chirac. In the end, Šefik Džaferović, a Bosnian member of the Presidency, attended the ceremony. Chirac was strongly against Serbian aggression in BiH. (Željko Trkanjec, EURACTIV.hr)

“I look forward to Pompeo’s visit to the region. It is in line with an increased US presence in our region. It’s something we’ve been wishing for. I think that an increased US interest for the Western Balkans is very favourable,” Đukanović said.