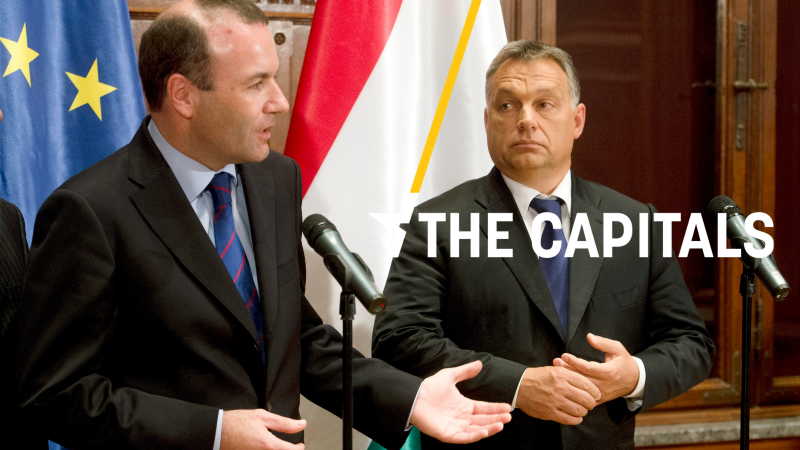 Dobrindt fears that Weber’s tough line on Orbán and his ruling Fidesz party could drive a number of European conservative parties away from the EPP and into a new right-wing formation in the next European Parliament.

In March, the EPP decided not to expel but to temporarily suspend Orbán’s Fidesz party over alleged violations of EU rule-of-law principles.

Before the decision, a high-ranking CDU source told EURACTIV.de that Orbán should be kept within the EPP otherwise he would end up in the embrace of the far-right. (Claire Stam, EURACTIV.de)

Getting climate neutral by 2050. Germany’s climate cabinet will debate how the country could reach zero net greenhouse gas emissions by 2050, Chancellor Angela Merkel has said. “It’s about climate neutrality. This means that we should not ensure there are absolutely no CO2 emissions but that if there are still CO2 emissions, we must find alternative mechanisms to store this CO2 or offset it,” Merkel added. (Claire Stam, EURACTIV.de)

The ‘small’ candidates’ debate will be broadcasted late at night “when people go to sleep”, according to Benoît Hamon of the leftist Génération-s, while Ian Brossat of the Communist Parti called the move a “democratic scandal” just before the European elections.

Homophobia. For the third consecutive year, physical assaults against LGBT people have increased in 2018 in France, to 231 attacks, according to a SOS Homophobie report. The NGO said homophobia had become “more and more violent” in France, as the number of assaults has increased by 66% percent since 2017.(EURACTIV.fr)

Taxing times. The Dutch government piled pressure on the EU yesterday by announcing plans to start taxing air travel if Brussels does not come up with a pan-European solution itself. If the rules take off then passengers departing Dutch soil will face a €7 charge. The Dutch also said that they are looking into whether a tax on jet fuel would work. (Sam Morgan, EURACTIV.com) Read more.

“If there is anything I would like to become, it is European Commissioner for Asylum and Migration. It would be very difficult, but that’s where it’s happening,” Geens said. His cabinet, however, played down his remarks. (Alexandra Brzozowski, EURACTIV.com)

Robles said Spain remained a “serious and trustworthy US partner” but added that its military corps was only bound to EU and NATO agreements. El Pais reported that the integration of the Spanish vessel in the US combat group was planned almost one year ago aiming to increase the joint interoperability and boost joint training and coordination. (EuroEFE.EURACTIV.es)

Salvini defies EU budgetary rules. “If we need to break some limits, we’re ready to do it,” right-wing Lega leader Matteo Salvini has said, referring to the country’s budget deficit and hefty debt to GDP burden, which is well in excess of EU limits.

Greek President in China. Following a meeting with his Chinese counterpart Xi Jinping, Greek President Prokopis Pavlopoulos said Beijing showed “understanding” for Greek positions on Cyprus. “There is understanding on China’s part, which is extremely important given that, at this time, we also have the understanding of both the US and NATO and, especially, of the EU.”

Sex scandal and Church. The discussion over the paedophilia scandal in the Catholic Church has heated up in Poland after the film “Tell No One”, which depicts histories of priests’ victims, was released on YouTube last weekend.

The minister of justice said the punishment for paedophilia would be stricter and Jarosław Kaczyński, the leader of the ruling right-wing Law and Justice (PiS) party, which is close to the Church, said that no sex offender will avoid the punishment. The issue is likely to influence the outcome of the EU elections and damage the PiS. (EURACTIV.pl)

Czechs prioritise environmental protection. Four out of five Czech voters believe that the protection of the environment, animals and nature, sustainable agriculture and fighting air pollution are critical priorities in the upcoming EU elections, an IPSOS MORI poll showed.

The report added that 69% of Czechs saw the fight against climate change as a priority. (Ondřej Plevák, EURACTIV.cz)

Another embassy spat. Palestine’s embassy in Romania said Liviu Dragnea, the leader of the ruling socialist party, had informed its ambassador Fuad Kokaly that Romania would not move its embassy in Israel to Jerusalem. But Dragnea said the statement did not reflect the talks. Romania’s foreign minister had finalised an analysis on whether to move the embassy which had now been sent to the other institutions related to foreign policy, Dragnea said.

FDI flows falling. The Romanian central bank has said that net foreign direct investments in the country reached €1.24 billion in the first quarter. The FDI inflows are down 20% from €1.55 billion in the same period of 2018, central bank data showed.(EURACTIV.ro)

Agriculture minister resigns. Agriculture, food and forestry minister Roumen Porozhanov has resigned due to the ongoing scandal involving purchases of luxury properties and the building of guest houses with EU aid for private use. The resignation comes after an investigation by the Prosecutor’s Office into alleged abuses of EU funds through the State Fund for Agriculture while Porozhanov was in charge of it.

Last week there were reports about the discrepancy between his asset declaration published on the anti-corruption commission’s website and his actual declaration. In his reasoning, Porozhanov says he does not wish the attack against him to impact on the Government’s work. (EURACTIV’s partner Dnevnik).

No land for foreigners. The agriculture ministry said the information published on Croatian daily Večernji list (See The Capitals) that Croatia had missed the deadline to extend a moratorium on the sale of agricultural land to foreigners was wrong. It said the deadline is July 2020 and would ask for an extension in time.

“Until now, such a type of extension for the additional 3 years was sought and received by Hungary, Slovakia, Lithuania and Latvia, so we do not see the reason for not allowing Croatia to do so either”, the ministry said.

In June 2020, a seven-year moratorium on the sale of state and private agricultural land to foreign nationals and foreign legal entities, which was negotiated under Croatia’s EU membership deal, expires.

Serbian radical party officials in The Hague. Serbian Radical Party officials Vjerica Radeta and Petar Jojic will be tried in The Hague rather than in Serbia, the UN court has said. Jojic and Radeta are charged with contempt of the Hague court for interfering with witnesses at the trial of their party leader, Vojislav Seselj, who was convicted of war crimes in April 2018.

A judge has issued a warrant for their arrest and ordered Serbia to extradite them without delay. A statement on the matter explained that the witnesses did not wish to testify in Serbia out of fear for their safety. (Beta-EURACTIV.rs)