German conservatives sink to historic low ahead of elections 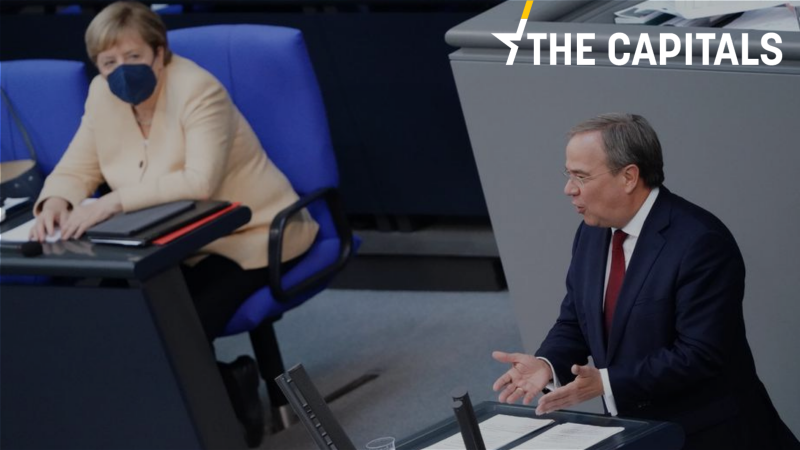 The historic low in polls marks yet another blow in what has been a rough month for conservative chancellor hopeful Armin Laschet. [EPA-EFE/CLEMENS BILAN]

Also read the article Michel: Afghanistan is a failure for the international community by Georgi Gotev.

The German Christian Democrats (CDU/CSU) have sunk below 20% approval among voters for the first time in Germany’s postwar history, according to a Forsa poll published on Tuesday. The Social Democrats (SPD), led by the vice-chancellor and finance minister, Olaf Scholz, are leading the polls with about 25%. Read more.

Paris court opens historic trial over 2015 terror attacks. The court case over the terrorist attacks that took place nearly six years ago at the Bataclan concert hall, the Stade de France and at terraces across Paris will take place at a large facility built specifically to host the trial at the historic court of justice on the Ile de la Cite in central Paris, and is expected to last nine months. Read more.

No October lockdown in Britain. Ministers have denied that the government could impose a ‘firebreak’ lockdown in October to curb a spike in COVID-19 cases. Read more.

Finnish government launches new COVID-19 strategy to open society. The five-party government has launched a new COVID-19 hybrid strategy that aims to have all restrictions lifted once 80% of the population is fully vaccinated, the government announced on Monday. Read more.

Greek anti-vaxxers refuse to accept blood from vaccinated people. The Greek public opinion was shocked when a doctor unveiled that anti-vaxxers have refused to accept blood from vaccinated people in order not to be “poisoned”. Meanwhile, the Greek government has been alarmed after media reports revealed several cases of thousands of fake COVID-19 certificates across the country. Read more.

Portugal’s crisis-hit flag carrier TAP could be back in the air by October. National flag carrier TAP is planning to put its restructuring plan into operation in October, its CEO, Christine Ourmières-Widener, said in an interview published in the company’s internal newsletter. Read more.

Italy looking into proposing extraordinary G20 summit on Afghanistan. Italy is verifying the conditions, methods and timing for an extraordinary summit of the G20 countries dedicated to Afghanistan, Foreign Minister Luigi Di Maio told parliament in a speech on Monday, following his return from Tajikistan, Uzbekistan, Pakistan and Qatar. Read more.

Commission’s proposal for financial penalties causes political turmoil in Warsaw. Allies of the ruling Law and Justice (PiS) party, as well as opposition politicians, have reacted strongly to the European Commission’s demand that the Court of Justice in Luxembourg impose daily financial penalty measures on Warsaw as the government is not complying with temporary measures set by the EU judges. Read more.

Czech health workers throw away AstraZeneca jabs. Czech healthcare workers have thrown away more than 14,000 doses of the AstraZeneca vaccine in the past month as interest in the vaccine has continued to dwindle.  Read more.

Fidesz-allied businessmen secretly win 35-year casino rights. The Las Vegas Casino group, a company that operates the most valuable domestic casinos, has been granted concession agreements to operate that will only expire in 2056, Telex reported. The company is owned by government allies István Garancsi and Kristóf Szalay-Bobrovniczky – the husband of government spokesperson Alexandra Szentkirályi.

The existing licences, which were due to expire in 2024, were reissued after the state gave itself the opportunity to do so by amending the law without having to launch a public tender for the operating rights, a call for tenders was sufficient and the new licenses will be valid until 2056.

Telex only learned of the decision thanks to a letter from a reader, later confirming the new licences were published on the Gambling Supervision Authority’s website. The five casinos under the group generate €28.7 million a year. (Vlagyiszlav Makszimov | EURACTIV.com with Telex)

China not giving up on building a coal-fired power plant in BiH. Chinese companies China Gezhouba Group Company (CGGC) and China Energy Engineering Group (GEDI) still want to go ahead with a project of building a new thermal power plant block in the eastern town of Tuzla with a Chinese government-backed loan even though the project was cancelled. Read more.

European Court rules in favour of former Bulgarian tsar. The European Court of Human Rights ruled against Bulgaria in the case of the last reigning monarch of the country – Simeon Sakskoburggotski, who was also the country’s prime minister from 2001 to 2005. Read more.

‘Business as usual’ for Romanian government after USR PLUS ministers resign. The government approved a budget revision on Tuesday, just a few hours after five ministers and a deputy prime minister from the USR PLUS party filed their resignations. Read more.

Report warns of Russian ‘diplomatic war’ against Kosovo. “The analyses of statements, briefings, articles and other documents of the Russian foreign policy establishment from 1 June to 15 August 2021 clearly show the continuation of the narratives that aim to undermine the statehood of Kosovo and the Western engagement in Kosovo and the region,” said the conclusions of the “Kosovo Observer: Russian Diplomatic Warfare and Media Disinformation”, published on Tuesday by the Kosovar Institute for Policy Research and Development (KIPRED). Read more.