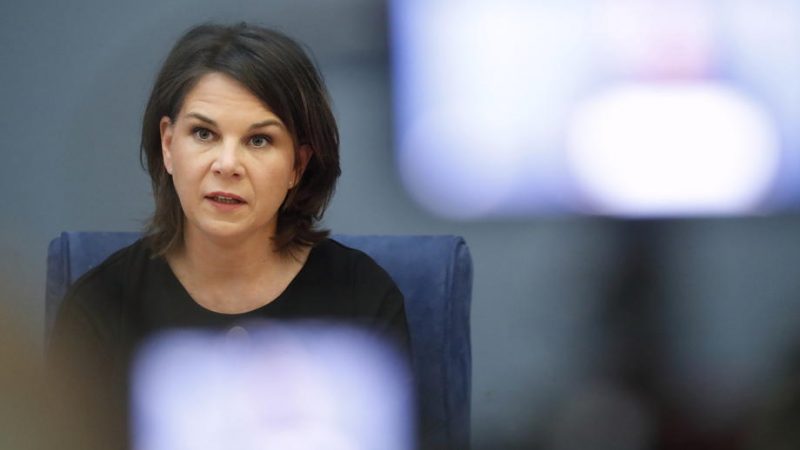 “Other partners are now supplying armoured vehicles. I would like to make it clear that this is not taboo for us either, even if it sometimes sounds that way in the German debate,” Baerbock said on Wednesday (20 April) at a press conference in Latvia. [TOMS KALNINS/EPA]

On Tuesday, Scholz said that he supported the delivery of heavy weapons to Ukraine by NATO allies, but refrained from confirming any deliveries of heavy armaments – like tanks or armoured vehicles – from Germany itself. Foreign minister Baerbock now emphasised that this hesitancy wasn’t due to a lack of will, but the desolate condition of the Bundeswehr.

“Other partners are now supplying armoured vehicles. I would like to make it clear that this is not taboo for us either, even if it sometimes sounds that way in the German debate,” Baerbock said on Wednesday at a press conference in Latvia.

Other EU-member states, like the Czech Republic, Belgium and the Netherlands, have already announced the deliverance of heavy weapons to war-torn Ukraine. While Baerbock emphasised that Germany would “act in concert” with its NATO partners, she said that the Bundeswehr’s stocks are depleted and that there is no heavy weaponry ready that “we can now deliver really quickly and without delay.”

Instead of providing Ukraine with the equipment of the Bundeswehr, Ukraine will be allowed to buy military equipment from German weapon manufacturers – like Rheinmetall – and the German government will provide €1 billion to pay for these shipments.

However, there are a lot of questions that remain unclear regarding Germany’s willingness to assist Ukraine with heavy weaponry.

Melnyk also refuted the argument that the German Bundeswehr’s stocks are depleted.

“The thesis that the Bundeswehr would no longer be able to deliver anything to Ukraine is not comprehensible,” Melnyk stated. According to him, Germany would have more than 100 Marder tanks at their disposal, as well as 800 armoured vehicles that could be delivered immediately.

However, instead of delivering heavy weaponry to Ukraine directly, Germany plans to support Eastern EU-member states in providing Ukraine with armaments of Russian and Soviet origin, saying that the Ukrainian military would be more familiar with these types of equipment. In return, the German government wants to fill the emerging gaps in military equipment of its Eastern NATO partners with modern German weaponry.

“The equipment and weapons that can be quickly delivered from other countries will be delivered to Ukraine, and Germany will promptly send replacements to these countries,” economy minister Robert Habeck told RP on Wednesday.

Criticism over this approach has also been mounting within the German coalition. “I think it’s a little paternalistic to tell the Ukrainian military, that you can’t handle this,” Anton Hofreiter, chairman of the committee for Europe of the German Bundestag told ZDF on Wednesday.

While this approach to opt for the delivery of Soviet and Russian equipment would be “good” in general, the German government should now focus on training the Ukrainian military to use modern equipment for the time “when the Russian and Soviet material is shot to pieces,” he added.

Foreign minister Baerbock has already addressed this issue. She stated that “we have made €1 billion available so that Ukraine can also procure more complex systems,” adding that Germany will provide “the systems, but also the training accordingly.”

However, it remains unclear whether the €1 billion in financial assistance by Germany can also be used for the purchase of heavy weaponry. On Tuesday, Scholz only referred to anti-tank missiles, air defence equipment, ammunition and “what can be used in an artillery engagement,” without highlighting what artillery engagement would entail.

The German industry would be able to deliver certain types of heavy weaponry in a short time frame. The German weapons manufacturer Rheinmetall, for instance, already announced last week that it could deliver Leopard 1 tanks in a matter of a few weeks.