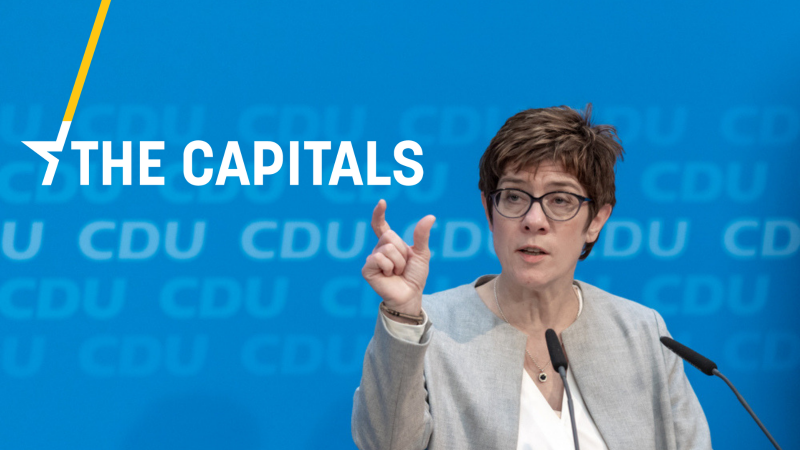 She did agree with the idea for safe external borders. “We have to complete Schengen,” she said, adding that it is necessary to reach an agreement to finalise “border protection”. She also suggested scrapping Strasbourg parliamentary sessions and said EU officials should no longer being exempt from national income tax.

Regarding security issues, she backed a permanent seat for the EU on the UN Security Council as well as the establishment of a European Security Council with the UK participation. (Claire Stam, EURACTIV.de)

New spat with Ankara: Turkey expelled on Sunday (10 March) the correspondents from national broadcaster ZDF and EURACTIV’s media partner Der Tagesspiegel as Ankara denied them accreditation and the residence permits, without any justification, Der Tagesspiegel reported.

In the meantime, the EPP’s lead candidate for the EU elections, Manfred Weber, said Turkey could not become an EU member and warned that he would end accession talks if he becomes EU Commission chief. (Claire Stam, EURACTIV.de)

Money for climate: “Why don’t we print extra money? We did it to save the banks. We also have to do it to save the climate, ” Bart Staes, Belgian Green MEP, wrote in the Flemish De Zondag newspaper. “The Court of Auditors says that we need €1,115 billion annually. Why don’t we create a European climate bank? It can finance investments with that money and provide citizens and businesses with interest-free loans,” Staes suggested.

His party argues there are many supporters of green quantitative easing, under which central banks could buy bonds issued by firms or governments that intend to fund environmentally friendly investment. The proposal rebuked criticism from Belgian conservative parties. Former Belgian finance minister Johan Van Overtveldt said that such a proposal would “lead to inflation and financial instability.” (Alexandra Brzozowski, EURACTIV.com)

‘Wind in the sails’ for Remainers: Brexit may not happen at all, if Conservative MPs fail to back Theresa May’s plans this week, Foreign Secretary Jeremy Hunt said on Sunday (10 March). “We have an opportunity now to leave on March 29, or shortly thereafter,” Hunt said. “And it’s very important that we grasp that opportunity because there is wind in the sails of people trying to stop Brexit.”

MPs are set to vote again on May’s deal on Tuesday (12 March), having rejecting it in January.

The SNP will be tabling amendments this week to May’s Brexit plans that would allow for a second Scottish independence vote to take place.

“We will do what we can to work with other parties to stop Brexit, we have no desire to see Scotland dragged out against its will, but we need to recognise that if that does happen then the people of Scotland have got to determine their own future,” Blackford said on the BBC’s Sunday Politics Scotland show.

Separatist leader Puigdemont to run for EU elections: Former Catalan leader Carles Puigdemont will lead Junts per Catalunya (Together for Catalonia) in the EU elections in order “internationalise the right to self-determination in Catalonia,” the politician announced on Sunday (10 March). However, the decision is merely symbolic, as according to the electoral law, Puigdemont would have to be resident in Spain to be able to run for a national party in the EU elections.

The former Catalan leader currently lives in Belgium, where he fled after he was accused of rebellion and sedition for his involvement in the unilateral call for the independence of Catalonia following a referendum. If elected, he would need to leave his position in Spain where he is subject to an arrest warrant. (Beatriz Rios, EURACTIV.com)

EFE partners with Google to tackle fake news: Google will collaborate with Spain’s international news agency EFE to help it innovate and further its advancement into cutting edge digital platforms. “The alliance with Google is key […] search engines are essential to ensuring that news media can be seen and read and redirected to reliable sources of information,” EFE’s President Fernando Garea said.

“Working together in the digital environment between aggregators and news agencies is the best antidote against fake news and misinformation, where collaboration is undoubtedly better than regulation,” he added. (EuroEFE.EURACTIV.es/EPA)

‘Defending’ the Polish family: Conservative Law and Justice (PiS-ECR) announced on 9 March a European Declaration focusing on 12 points: a return to EU’s original values, defending the right of parents to raise their children, fighting for the Polish farmers’ interests and putting an end to illegal immigration.

PiS leader Jarosław Kaczyński said family took centre stage in his party’s politics and warned against what he termed the “attack on children” allegedly launched by the opposition. Warsaw’s mayor signed last week a LGBT+ Declaration, calling for anti-discrimination and sexual education to all children. (EURACTIV.pl)

“Such a project is very likely and realistic, but we need strong legal guarantees from Brussels. Of course, economic operators must also be convinced that such a supply route is feasible,” he added. (Sarantis Michalopoulos, EURACTIV.com)

Authentic European Federation: Mikuláš Dzurinda, a center-right former Slovak PM (EPP) who brought the country into the EU in 2004, described the three stages of Slovakia’s membership in the EU: In the beginning, he said it was a “blind joy”, then “awakening and economic crisis” took place and currently there is a perpetual political crisis that endangers the EU project. The solution is moving towards “authentic European federation based on the principle of subsidiarity,” he said. (Zuzana Gabrižová, EURACTIV.sk)

Ruling party vice-chair in trouble: The Vice-chairman of the Czech PM’s political movement ANO, Jaroslav Faltýnek, is suspected of influencing the Czech Antimonopoly Office in a case relating to a tender for the road toll on Czech highways. The police seized his laptop and mobile phone. PM Andrej Babiš said he was sure about Faltýnek’s innocence. (Aneta Zachová, EURACTIV.cz)

Pro-EU alliance green-lighted: Romania’s High Court overruled a Central Electoral Bureau’s decision and authorised the registration of the Alliance 2020 USR PLUS, a coalition of two pro-European parties. ”We will continue to fight with even more impetus,” said Dacian Ciolos, a former EU Commissioner, who is now chief of the PLUS party and an EU elections candidate for the alliance. Previously, its registration was rejected on legal bureaucratic grounds, which was seen by the opposition as a government attempt to block the pro-EU alliance. (Bogdan Neagu, EURACTIV.ro)

Improving air quality: А project for a national program to improve air quality is being developed in Bulgaria and will cost between €242 and 450 million, Bulgarian Minister of Environment Neno Dimov said. The project covers the period from 2018 to 2024. The program envisages the implementation of measures for the residential heating and transport sectors. The main focus is to phase-out solid fuel stoves and boilers in municipalities with poor air quality. (Dnevnik.bg)

Provocative minister refuses to resign:  Minister of Regional Development and EU Funds Gabrijela Žalac hit a young girl while driving a car without a valid driving license. Unlike the opposition, the government argues that there is no reason for her to resign. (Željko Trkanjec, EURACTIV.hr)

EU angry with racist gathering: Some 200 nationalist Serb Chetnik Movement members gathered in the Bosnian town of Visegrad, which marks the border between Serbia and Bosnia, to mark the anniversary of the arrest of their founding leader Draza Mihajlovic, a war criminal remembered for atrocities during WWII in Bosnia and Herzegovina. The gathering was condemned by OSCE and the EU mission.

Today’s disturbing events in Visegrad, glorifying violence and inciting to hatred, only takes a multi-ethnic #BiH and the whole region further away from reconciliation and the EU’s principles and values of tolerance. @eubih @N1info @Oslobodjenjeba

A new obstacle in the dialogue: Priština’s platform for negotiations with Belgrade adopted by the Kosovo Parliament prescribes a mutual recognition of Kosovo and Serbia with existing borders, respect of the rights of the Albanian community in Serbia and abolishment of UNSC Resolution 1244. President of Serbia Aleksandar Vučić said the platform was “essentially Priština’s decision to stop the dialogue with Belgrade”. Priština and Belgrade are negotiating a comprehensive agreement with EU mediation, but the talks are in crisis. (Julija Simić, Beta-EURACTIV.rs)