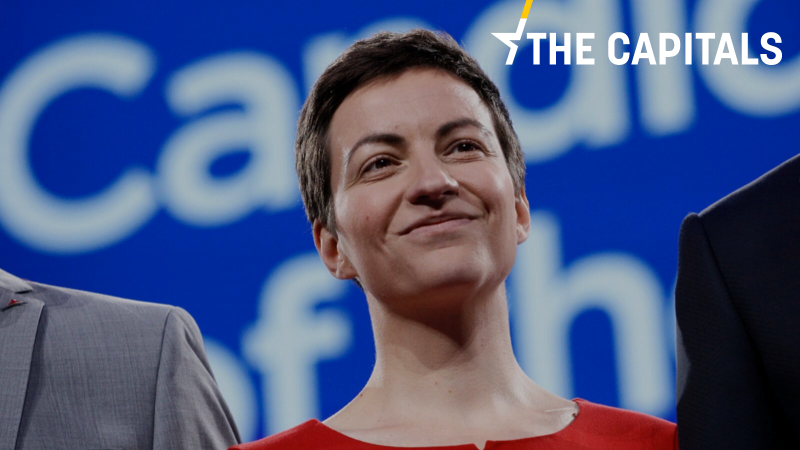 Ska Keller: "We, the Greens, take decisions based on content." [Shutterstock]

Before you start reading The Capitals today, take a look at the UN climate summit, day #2: Few announcements in the end – ‘How dare you’

“This is not an answer to the climate crisis,’” said Katrin Göring-Eckardt, leader of the Greens in the Bundestag. In her view, the grand coalition has “capitulated and failed”.

Göring-Eckardt is not the only one who questioned the functionality of Angela Merkel’s grand coalition of conservatives and social democrats: On Sunday, former EPP spitzenkandidat and head of the Bavarian conservative CSU, Manfred Weber, said in an interview that a coalition of the conservative CDU/CSU and the Greens would be a model for the future, although it could be “exhausting”. He said that the Greens and conservatives could “solve the social conflicts we have in Germany,” but only if they work together.

Weber did not call for a premature end to the so-called “GroKo” (grand coalition between CDU/CSU and the Social Democratic Party (SPD)), but said that further collaboration with the social democrats, a party which has reached record lows since the last state elections, was currently “not a project for the future”.

Asked for a comment, former Green spitzenkandidat Ska Keller told EURACTIV: “We, the Greens, take decisions based on content. I welcome that Mr Weber calls on his party to engage more in climate protection, but the ‘climate package’ shows quite clearly how little that means”.

However, the question is whether this is also a “nein” to social democrats, who were equally involved in drafting the new climate law. Several centre-left politicians have also called for a coalition split and collaboration with the Greens. “Germany needs a ten-year break from CDU and CSU,” said Karl Lauterbach, who is one of the candidates for SPD leadership, after the presentation of the climate package.

As all major parties exclude a coalition with the right-wing AfD, the Greens have become the kingmaker in German government negotiations. Currently present in nine of sixteen state governments, the party is probably about to enter new coalitions with the SPD and CDU in Brandenburg, as well as in Saxony.

In Prague, the government has been sceptical towards ambitious targets on the eve of the UN Climate summit. “I have the feeling that many countries proposing carbon neutrality in 2050 are not even able to fulfil much closer targets,” said Czech Environment Minister Richard Brabec in an interview with EURACTIV.cz’s partner Aktuálně.cz. Brabec and Prime Minister Andrej Babiš are convinced that the enthusiasm from the 2015 UN Climate Change Conference in Paris conference has vanished.

“Europe is reducing greenhouse gasses, but in the rest of the world the level is getting higher,” Brabec said. (Aneta Zachová, EURACTIV.cz)

On the other hand in Greece, the conservative New Democracy government plans a high-level conference in Athens next year to adopt a resolution on the protection of cultural and natural heritage from climate change, Greek PM Kyriakos Mitsotakis said at the UN Climate Summit 2019.

He also said that Greece would adopt a new national policy for energy and the climate (a reviewed National Climate and Energy Plan) by the end of the year, as EURACTIV.gr reported on 8 September. The national policy would include the shutdown of all coal power plants by 2028, as well as the increase of the share of renewable resources to 35% by 2030 – and a total ban on single-use plastics starting in 2021. (Theodore Karaoulanis, EURACTIV.gr)

Fears of record abstention. Spain will hold fresh elections on 10 November, after acting socialist Prime Minister Pedro Sánchez (PSOE) failed to get the support of leftist party Unidas Podemos (United We Can). The acting PM also failed to obtain the abstention of the conservatives of Partido Popular (PP) and of the liberal-centrists Ciudadanos (Citizens).

But recent polls conducted for the daily newspapers El Pais (left-liberal) and La Razón (right-wing) project a “historical” abstention rate, due to increasing “disappointed” citizens, who said they don’t believe in the current political system, especially after politicians failed to form a stable government twice in a row in almost a year, EURACTIV’s partner EFE reported.

According to the poll conducted for La Razon, abstention would grow to 35%, almost 7% more than in the 28 April elections. If confirmed, it could mean the lowest turnout for Spain since the return of democracy in November 1975.

With 26.6% of the votes, socialist PSOE would win again, according to the La Razon survey. This would mean that the party would obtain between 124 and 127 seats, which would one to four more than in the April elections. The conservative PP would then follow with 22% and between 89 and 92 seats, compared to the 66 obtained six months ago. (Fernando Heller, EuroEFE.EURACTIV.es)

Labour to stay neutral. Labour members have backed leader Jeremy Corbyn’s neutral stance on Brexit, should a future referendum take place, following a vote at the party conference on Monday.

Remain-backing Shadow Brexit secretary Sir Keir Starmer struck a disappointed tone, saying that he would have liked to win the vote.

However, in the end, a majority of Labour’s 12 affiliated unions, including Unite and the GMB backed Corbyn’s intention to remain neutral in any future referendum. (Samuel Stolton, EURACTIV.com)

MIGRATION AGAIN ON THE AGENDA

No longer alone.“As of today, Italy and Malta are no longer alone,” Italy’s Interior Minister Luciana Lamorgese said following a meeting with her counterparts from Malta, France and Germany in Valletta.

The four countries reached a deal on sharing the burden of asylum seekers who arrive via sea from North Africa. The deal refers to the redistribution of all asylum seekers, not just people who have been recognised as refugees, EURACTIV’s partner ANSA reported.

According to current EU rules, refugees and other asylum-seekers are supposed to stay in the first country they arrive while their cases are being processed, which continues to put too much pressure on Europe’s south. In an interview with EURACTIV last week in Strasbourg, Tiziana Beghin, the head of Five Star Movement delegation in the European Parliament, made it clear that the new Italian administration will not be an “open harbour” government, saying that neither Italy, nor Greece, nor Spain can handle the migration issue alone.

However, on the other side of the Mediterranean Sea, things appear to be deteriorating. EURACTIV Greece reports that there are now 12,000 refugees at the Moria refugee camp on the island of Lesvos, right opposite to Turkey’s shore, despite the facilities on the island only being able to accommodate 3,000. In the last weeks, almost 500-800 refugees have arrived in Greece every day by going via Turkey, according to reports.

EU Commission spokesperson Natasha Bertaud said on Monday (23 September) that she was not aware that Greece had made any request for additional Frontex forces or patrols, but added that the Commission stands ready to support Greece operationally through its agencies.

Meanwhile, the Slovenian police have reported 11,291 illegal border crossings since the start of this year, Slovenian Interior Minister Boštjan Poklukar said. Most illegal migrants come from Afghanistan, Pakistan, Algeria and Morocco, and most of them are returned to Croatia, Poklukar added. As of yesterday, Slovenia’s Armed Forces will help the police in defending the border with Croatia. Slovenia has a fence on a huge part of the border with Croatia.

Scandal. Marian Banaś, who was appointed as chief of the Supreme Audit Office three weeks ago, had previously served as Poland’s finance minister. He has been accused of concealing the possession of a tenement house in Krakow in his financial disclosures. According to media reports, the tenement house was used as an escort agency and was run by a local criminal. Banaś said he would fight these accusations in court, but made a request to the speaker of the lower house of parliament (Sejm), asking to take unpaid leave until his financial statements are fully examined. (Łukasz Gadzała, EURACTIV.pl)

Serbian scenario? The Košice self-governing region has offered to purchase the steel plant in Košice from U.S. Steel for the symbolic sum of €1, reported regional daily newspaper Korzár. Its representatives are concerned about the future of the company, which is the biggest employer (around 12,000 people) in the region. U.S. Steel Košice is planning to dismiss 2,500 employees until 2021 as it struggles to remain competitive. The company said it would only comment on the offer once it is formally delivered. The country’s economy ministry considers the offer to be “absurd and unserious”, as well as a personal PR move by Rastislav Trnka (President of Self-Governing Region), who is “ridiculing one of the biggest employers in Slovakia”.  (Zuzana Gabrižová,EURACTIV.sk)

Bulgaria exceeds its NATO spending target. Bulgarian PM Boyko Borissov told a visiting NATO official that the country has not only met but even exceeded NATO’s recommended spending target for a country’s defence budget, which is set at 2% of a country’s GDP. In 2014, following Russia’s military intervention in Ukraine, all NATO members pledged to meet the 2% target by 2024.

Borissov told Stuart Peach, Chairman of the NATO Military Committee, that with the acquisition of eight F-16 fighter jets, Bulgaria’s defence spending for 2019 would probably reach 3% of its GDP. In July 2018, during a NATO summit in Brussels, US President Donald Trump harshly criticised NATO allies for not spending enough on defence. (EURACTIV Bulgaria)

Turmoil with Thomas Cook’s bankruptcy. “We are very sorry to hear the news of the Thomas Cook company closing down as it has a long tradition and experience in tourism. What is exceptionally important is that none of its guests currently staying in Croatia will suffer any damage […] The British government will organise flights to have all tourists returned home while the British government’s insurance agency will cover the costs of their accommodation”, announced Croatia’s foreign and European affairs ministries, as well as the tourism ministry, in a joint press release.

The news of the company’s bankruptcy has created turmoil across Europe. Only in Greece, the Association of Greek Tourism Enterprises said the bankruptcy would cost the country €250-500 million. (Željko Trkanjec,EURACTIV.hr)

Close to two million voters have the right to vote in Kosovo. In the snap general election in Kosovo, which will be held on 6 October, 1.93 million voters will be eligible to vote. In the ten municipalities with a Serb majority, 117,808 voters have the right to vote. The Central Election Commission of Kosovo, according to a press release, has decided on the following slogan for the elections: “Show Your Strength, Vote”. (beta.rs,EURACTIV.rs)