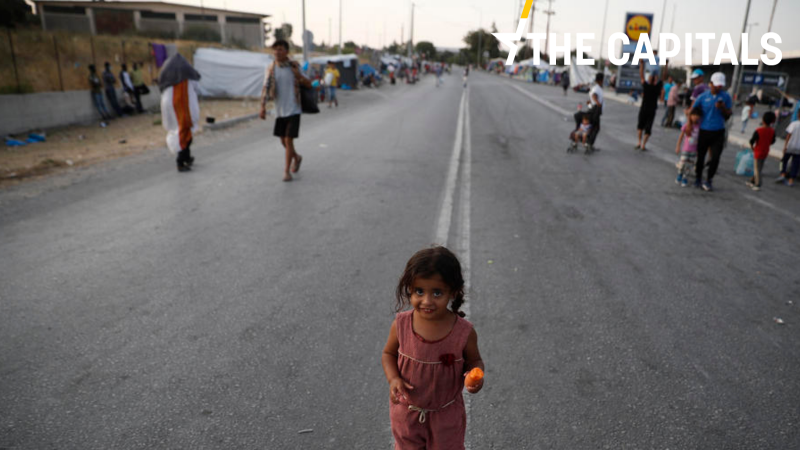 At a virtual summit between Chancellor Angela Merkel and local politicians, both sides were unable to agree on the admission of further refugees. [EPA/DIMITRIS TOSIDIS]

Before you start reading today’s edition of the Capitals, feel free to have a look at the article “Oil will still drive Europe’s cars by 2030, data show“, by Sarantis Michalopoulos.

265 confirmed cases in the European Commission. Since the beginning of the pandemic, 265 COVID-19 cases have been confirmed in the Commission and 291 are suspected, EURACTIV has learnt. More.

Municipalities fail with demands to accept more refugees. German municipalities renewed their call for a rapid admission of refugees from Greek camps, especially from Moria, which burned to the ground last month. But while a number of cities and municipalities have expressed readiness to take in refugees for humanitarian reasons, the federal government repeatedly made it clear that it wants to “rely on European solutions”. Read more.

Record EU budget contribution. In the framework of the first reading of the 2021 finance bill, France’s National Assembly adopted a forecast amount of €26.86 billion for its contribution to the EU budget of 2021, which, compared to 2020, is a €5.4 billion increase. Read more.

Stand-off continues. Negotiations on an EU-UK trade deal are still yet to restart despite another call between the UK’s chief negotiator on a post-Brexit trade deal David Frost and EU counterpart Michel Barnier on Tuesday (20 October). Read more.

Level 5 restrictions to save Christmas. Ireland will impose new restrictions across the country today that will see the closures of pubs, restaurants and non-essential retail services.

The new limits will come into force this evening and will last six weeks. It is understood the government is imposing the measures in order to allow for lower restrictions during December and the festive season. Read more.

Huawei excluded from 5G network and bidding. Sweden’s Post and Telecom Authority has decided – based on a recommendation by the Swedish Security Service (SÄPO) and the Defence Forces – to oust Chinese tech giant Huawei from existing networks and future 5G projects. The same decision applies to Chinese tech company ZTE. Read more.

Local measures need central coordination. Italy’s regional administrations will have the power to enforce stricter measures but will have to keep a constant dialogue with the country’s central government as it can provide better coordination, Prime Minister Giuseppe Conte said on Tuesday after he met with Spanish counterpart Pedro Sanchez. Read more.

Belarusian immigrants want to work in Poland. Belarus opposition leader Svetlana Tikhanovskaya, who met with Polish Prime Minister Mateusz Morawiecki in Warsaw on Tuesday (20 October), urged Poland’s leader to change the law to make it possible for those being forced to flee Belarus and entering Poland to take up a job there. Read more.

REACT-EU to fund Czech sports dressing rooms. The Czech government approved the distribution of funds under the REACT-EU emergency instrument. While half of the allocated money should support regional healthcare systems, 15% will go to local sport clubs, particularly sports dressing rooms. Regional authorities have criticised the decision. Read more.

Kyiv warns Budapest against interference in local elections. Ukraine is warning Hungary against violating its electoral legislation and attempts to interfere in the country’s internal affairs, Ukraine’s foreign ministry said in a statement on Tuesday. Ukraine will hold its local elections on Sunday (25 October). Read more.

COVID-19 testing to be voluntary (sort of). Slovakia is preparing a major logistical operation as it gears up to test its entire population for COVID-19 within a few weeks and under the coordination of the armed forces. Read more.

COVID-confusion. Immediately after arriving in Estonia, a Bulgarian delegation had to isolate after it became clear that President Rumen Radev had come into contact with Air Force Commander General Dimitar Petkov who had tested positive for COVID-19. Radev did not attend Monday’s dinner on the occasion of the Three Seas Initiative meeting in Tallinn. Read more.

New measures to assist employers. A new set of redesigned measures amounting to 350 million kunas (€46 million) should help the enterprise sector, Prime Minister Andrej Plenković said on Tuesday (21 October). While the first measure would aim to shorten the week’s working hours, the second assistance measure would be graded according to a downturn in the volume of business. Read more.

Bucharest tops Europe for highest costs faced by the average city resident, based on intense pollution levels, according to a study conducted by CE Delft for the European Public Health Alliance (EPHA). More.

Budget passes finance committee. The government defended its budget plans for the coming two years in response to the Fiscal Council’s concerns about excessive expenditure, underscoring the importance of investment for recovery and noting that investment expenditure is to be boosted mainly at the expense of EU funds. The parliamentary finance committee did not have any amendments to the budget, although it no longer envisages direct expenditures mitigating the consequences of the pandemic, STA reported. (Željko Trkanjec | EURACTIV.hr)

New Serbian government to have shorter term. Serbia’s new government would have a shorter term and the country’s next parliamentary elections will be held on 3 April 2022 at the latest, which is the same day as the presidential elections and local elections in Belgrade, Serbian President and ruling party leader Aleksandar Vučić said on Tuesday (20 October). Read more.

Maritime border spat between Albania and Greece goes to The Hague. The issue regarding the maritime border between Albania and Greece will be resolved using international justice, announced Albanian Prime Minister Edi Rama, while Greek Foreign Minister Nikos Dendias confirmed the matter will be transferred to the International Court of Justice in The Hague.

Albanian opposition at the meeting with Dendias called for the abolition of the law of war passed by Greece after Italian occupation forces attacked Greece in October 1940. (Željko Trkanjec | EURACTIV.hr)