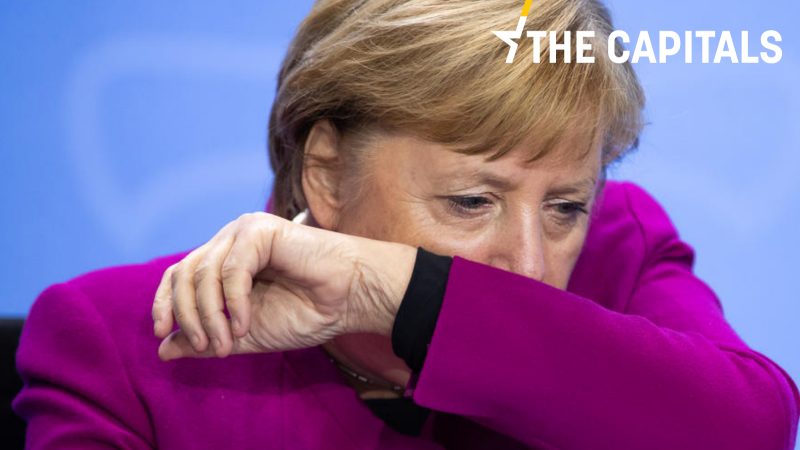 Before you start reading today’s edition of the Capitals, feel free to have a look at the article Budget battle heats up as negotiators hit stalemate, written by Jorge Valero.

New restrictions “not tough enough to avert disaster”, says Merkel. In what has been referred to as the “most important summit in months”, Germany’s federal government and states negotiated well into Wednesday night, but initial reports announced that the group had reached a partial agreement for unified coronavirus measures. However, Merkel believes that the measures do not go far enough. Read more.

Macron toughens anti-coronavirus measures. French President Emmanuel Macron announced a series of more restrictive measures on Wednesday, warning “we are in a worrying situation that means we must neither panic nor do nothing at all.” Read more.

More women than men lost their jobs during pandemic. New figures from the Austrian Labour Market Service confirm what had been suspected by observers: Women were more disproportionately affected by the economic consequences of the COVID-19 crisis than men, particularly as female unemployment has risen more sharply than that of men since April.

The city of Vienna is the sole outlier. “That should make us think: places with good child care have less female unemployment,” said the head of the Viennese Labour Market Service. (Philipp Grüll | EURACTIV.de)

Hospitals to reserve ICU beds contingencies. Brussels hospitals have been told to raise their reserve of their intensive care beds (ICU) for COVID-19 patients from 25% to 50%, announced Brussels Health Minister Alain Maron told RTBF on Wednesday.

In some cases, COVID-19 patients were sometimes transferred between Brussels hospitals or to facilities outside the region, but the latter sometimes refused to accept them in fear they would block their own capacities. (Alexandra Brzozowski, EURACTIV.com)

Too much emphasis on ‘personal responsibility’, admits Rutte. During a parliamentary debate, Dutch Prime Minister Mark Rutte acknowledged that he had not communicated well enough about the government’s coronavirus policy. Read more.

Economy faces ‘critical juncture’, OECD warns. The UK economy’s recovery from the COVID-19 pandemic risks being derailed if it leaves the EU’s single market without a successor trade deal, the Organisation for Economic Co-operation and Development has warned.

“The United Kingdom is at a critical juncture,” the OECD wrote in its United Kingdom Economic Survey, published on Wednesday (14 October). “Decisions made now about the management of the COVID-19 crisis and future trade relationships will have a lasting impact on the country’s economic trajectory for the years to come,” it added. Read more.

Support for Scottish independence from the United Kingdom has risen to a record high of 58%, according to an Ipsos Mori poll. Read more here.

Minister survives ‘mask-gate’. With 106 votes in favour and 79 against, Finland’s Family and Social Services Minister, Krista Kiuru (SDP), made it through her confidence vote on Wednesday, which was brought by the conservative National Coalition party (NCP). The conservatives criticised the minister for her poor and conflicting communication on recommendations especially relating to the use of protective masks. Read more.

In other news, Italy registered a new record number of 7,332 infections on Wednesday. It is the highest number since the start of the pandemic. However, this is also due to the high number of tests conducted, which were 152,196, also a record. The death tally now reaches a total of 36,289. (Alessandro Follis | EURACTIV.it)

Meanwhile, the Spanish economy, which has been severely hit by the COVID-19 crisis, will shrink by 12.8% this year, predicted the International Monetary Fund (IMF) in its newest forecast released on Tuesday (13 October).

The pandemic, which has mostly impacted the country’s tourism and services sectors, which account for around 15% of Spain’s total GDP according to 2019 data, has been devastating with a catastrophic summer season and sombre hopes for the winter season, Spanish media reported. (EUROEFE)

Portugal now in ‘calamity situation’. Portugal raised its level of alert on Wednesday from a contingency situation to a calamity situation. Under the state of calamity, which is to apply across the country, there can no longer be outdoor gatherings in public of more than five people. Read more.

13-year prison terms. The leader of Greece’s neo-Nazi party Golden Dawn and his inner circle were handed 13-year prison sentences on Wednesday as a trial seen as one of the most important in the country’s modern political history neared its conclusion. Read more.

In other news, diplomatic sources told EURACTIV Athens’s goal from the summit to add to the conclusions such a wording that makes the prospect of sanctions against Turkey more tangible. Background here.

“Repolonisation” of the media. Poland’s culture minister Piotr Glinski on Tuesday has called for state-run companies to buy as many media outlets as possible. “Wherever it is possible, state-owned companies should buy media,” Gliński told radio station RMF FM.

Conflict of interest confirmed. Czech Prime Minister Andrej Babiš has a conflict of interest, the country’s Senate stated on Wednesday, upholding the conclusions reached by its interim commission that inquired into the European Commission audits dealing with the prime minister and EU subsidies for agrochemical holding Agrofert. Read more.

Slovak PM refuses to bring his sherpa to the summit. The row regarding new coronavirus measures between Prime Minister Igor Matovič (OĽaNO) and Economy Minister and leader of the Freedom and Solidarity (SaS) party, Richard Sulík, has prompted the prime minister to decide he would not bring State Secretary for European Affairs and his “sherpa”, Martin Klus, to this week’s summit in Brussels. Read more.

Though the word “defended” was taken from Slovenian Agency STA, a correction was published yesterday morning at 8.13 on STA that reads: “Please note that PM Janša did not explicitly defend political attacks on the judiciary, he defended criticism of its work.”

In other news, parliamentary speaker Igor Zorčič received representatives of the Slovenian minority in Italy who acquainted him in detail with the situation and minority wishes ahead of Zorčič’s working visit to Rome on Friday. They hope to have a reserved place for an MP in the Italian parliament, but it is questionable as the country has decided to reduce the number of MPs. (Željko Trkanjec | EURACTIV.hr)

Total rejection. The part of the European Commission’s 2020 Rule of law report that says that the Bulgarian General Prosecutor is an untouchable figure is not true and is the result of propaganda in Bulgaria, said General Prosecutor Ivan Geshev during a hearing in Bulgaria’s parliament’s legal committee.

Geshev was summoned before the National Assembly to report about the prosecution’s results since the beginning of the year when his seven-year-long mandate started. When he was asked to comment on the European Parliament’s resolution on Bulgaria, he said that he did not want to take part in “political games”. (Krassen Nikolov | EURACTIV.bg)

Meanwhile, Miloš Vučević, president of the Main Board of Serbian Progressive Party (SNS), whose president is Serbian President Aleksandar Vučić, has said that SNS supports the idea of the Serbian member of the BiH presidency, Milorad Dodik, adding that the government in Belgrade should enable automatic citizenship of Serbia for all citizens of Republika Srpska, the Serb entity in BiH. Croats in BiH have a right to Croatian citizenship. (Željko Trkanjec | EURACTIV.hr)

Albanians lack ‘honesty’ and ‘integrity’? “Fighting corruption is a whole-society effort and needs to be fought from various angles at the same time, with clear political will and robust institutional framework. The aim is to produce a deeper cultural shift towards a society that fully values honesty and integrity,” tweeted Luigi Soreca, EU Ambassador in Tirana.

News portal exit.al interpreted it as “a tweet that marks a new low for the European Commission’s communication strategy in Albania implying that Albanians lack “honesty” and “integrity”. Exit.al has criticised “deeply problematic, colonial and orientalist mindset that has taken hold in offices of EC”. (Željko Trkanjec | EURACTIV.hr)