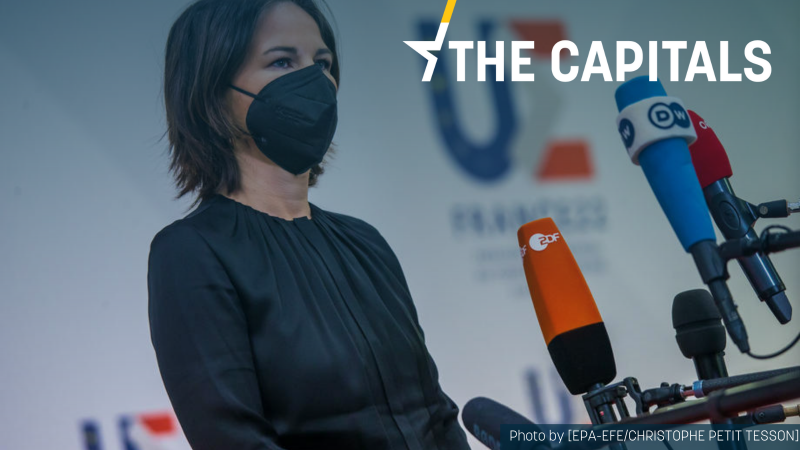 The multilateral negotiations that followed the Geneva talks in NATO and the OSCE have largely failed and “produced no tangible results,” Andras Racz, senior research fellow at the German Council on Foreign Relations (DGAP) told EURACTIV Germany. [EPA-EFE/CHRISTOPHE PETIT TESSON]

German foreign minister Annalena Baerbock will visit Ukraine and Russia on Monday to defuse rising tensions at the Ukrainian border and revitalise the Normandy format in an attempt to ensure that the EU is not sidelined in the negotiations. Read more.

French lawmakers give vaccine pass final OK. The French National Assembly has adopted the bill introducing the vaccine pass on Sunday evening. The pass will come into force by the end of the week,  replacing the sanitary pass, and granting access to restaurants, transport, venues that will no longer be accessible with PCR or antigen tests. Read more.

Swedish police hunting down drone spotted at nuclear plant. Police in Sweden deployed patrols and helicopters at the Forsmark nuclear power plant to hunt for a large drone seen flying over the site late on Friday. So far, they have been unable to identify the unmanned device. Read more.

Finnish NATO debate kept alive by Russia tensions. The North Atlantic Alliance (NATO) could decide overnight if Finland and Sweden applied for membership, former NATO Secretary-General, Anders Fogh Rasmussen, told broadcaster YLE in an interview on 15 January. “You could be a member the very next day because you meet all the necessary membership criteria,” Rasmussen added.

Political leadership in Finland and Sweden has been busy trying to convince others that there has been no change to their neutrality stance, that non-alignment still holds and that NATO applications are not being prepared. (Pekka Vänttinen | EURACTIV.com)

Close to half of Spain’s children already have their first COVID-19 jab. More than 1.3 million children aged 5-12 have received their first jab of Pfizer’s paediatric COVID-19 vaccine, although health authorities expressed moderate optimism about the situation as infections with the Omicron variant are rising. Read more.

Italian parliament’s president: next president needs to be of ‘high morality’. The next president has to be a “profile of high morality, adhering to our Constitution, principles and strong values, which can represent Italy in all its aspects” the Italian Chamber of Deputies’ President Roberto Fico told Rai3 on Sunday. Read more.

Greece starts to fine unvaccinated over 60s. Greeks over 60 who have not been vaccinated yet will begin receiving a €100 monthly penalty, as of Monday. However, the government ruled out the scenario of extending mandatory vaccination to other age groups. Read more.

Poland refuses to pay fines for Turów mine, agrees to reduced payments from EU funds. The Polish government has rejected the European Commission’s order to pay outstanding fines for not complying with the EU Court of Justice’s ruling to stop the activity of the lignite mine in Turów, which was the subject of the clash between Poland and the Czech Republic. However, the government did agree to receive reduced payments from the EU budget. Read more.

Croatian minister: No one asked for extended Solidarity Fund deadline. Interior Minister Davor Božinović denied Croatian media’s reports that the European Commission refused to extend the deadline for Croatia to utilise funding from the Solidarity Fund, saying he did not know what all this drama was about because no one had asked for an extension. Read more.

Serbia votes in favour of judicial constitutional amendments. Serbian citizens on Sunday voted in a referendum to make changes to sectionS of the Constitution dealing with the judicial system. Read more.

Vucic denounces Australian court ruling against Đoković as witch hunt. Australia revoking its visa to tennis player Novak Đoković was a political decision and witch hunt, and Canberra had degraded itself by doing so, Serbian President Aleksandar Vučić said on Sunday. Read more.

Vucic asks Dodik and Republika Srpska to participate in state institutions. Serbia’s President Aleksandar Vučić called on the Serb member of tripartite Bosnia and Herzegovina (BiH) Presidency, Milorad Dodik, and authorities in the Republika Srpska (RS, Serb entity) to participate in the work of joint state institutions in BiH and protect the interests of the Serbs. Read more.

Igor Dodik, Milorad Dodik’s son who has business interests in Alternativna TV, has announced hiring a team of lawyers to launch legal proceedings against Eric Nelson, US Ambassador to BiH, for what he called “false allegations”.

Speaking to Nezavisne novine daily, Nelson commented on recently introduced US sanctions on the private media outlet Alternativna TV due to close links to Milorad Dodik, a subject of the US sanctions. (Željko Trkanjec | EURACTIV.hr)

Albania seeks to restart thermal power plant amid energy crisis. Albania’s state-owned electricity-producing company is planning to lease a thermal power plant from a third party in the hopes of combatting the energy emergency declared back in October. Read more.