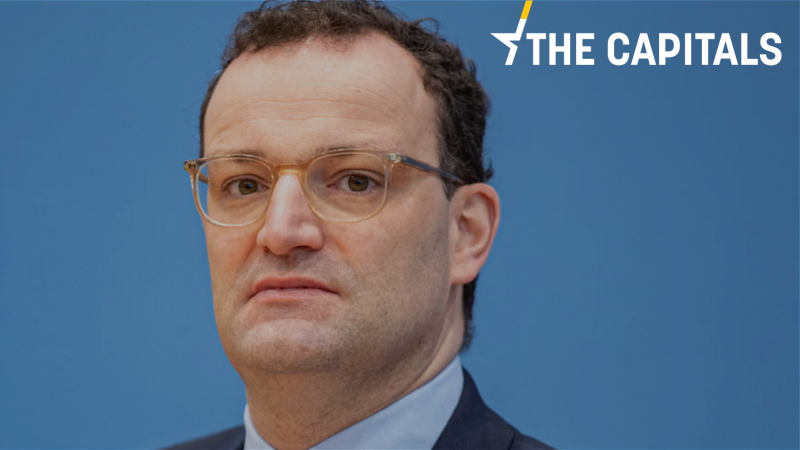 Depending on the EU's decision, Spahn could change Germany's course to open up vaccinations to younger people, according to Der Spiegel. [EPA/ANDREAS GORA]

Before you start reading today’s edition of the Capitals, feel free to have a look at the article “Brussels doesn’t buy AstraZeneca’s assurances it doesn’t sell EU doses to other countries“.

Spahn considering changes to Germany’s vaccination plan. German Health Minister Jens Spahn (CDU) is weighing possible changes to the country’s vaccination schedule after media reports stated that the vaccine from AstraZeneca – set to be approved by the European Medical Agency (EMA) this week – was only 8% effective for those over 65 – a claim the company, as well as German health authorities, have denied. Read more.

EU must not lose ‘momentum’ for dialogue offered by Biden, Portugal says. Portugal’s Foreign Minister Augusto Santos Silva told EU lawmakers on Tuesday (26 January) that the bloc should not lose the new momentum offered by Joe Biden’s administration to relaunch dialogue with the United States. More.

French MPs address issue of animal abuse. France’s National Assembly started on Tuesday their examination of the bill reinforcing the fight against animal abuse, which provides for tougher penalties against animal abuse and a ban on keeping wild animals in circuses, fairs, and dolphinariums. Although the subject matter often happens to be a source of disagreement, several articles regarding, for instance, fox hunting, intensive breeding, and bull-fighting, have been removed from the bill as they are likely to cause tensions.

Still, the bill has long been awaited by the French despite the country setting the sad record for the number of abandoned animals in Europe. According to many observers, the issue is also of great importance in the political debate, demonstrated in particular by the surprise rise in the last European elections of the Animalist Party, which received 2.2% of the vote – almost as much as the emblematic Communist Party (2.5%). (Lucie Duboua-Lorsch  | EURACTIV.fr)

Belgian soldiers train in Tyrol amid pandemic. A unit of 80 Belgian elite soldiers is currently training in the Alps of Tyrol, the Austrian army confirmed on Wednesday. Asked why the Austrian defence ministry had agreed to such an operation despite the current travel restrictions, a ministry spokesperson said the soldiers had entered the country with a negative test. The soldiers are also abiding by all COVID-safety measures and not coming into any contact with the Austrian population, the spokesperson added. “This training is absolutely necessary for the international deployment of these Belgian soldiers,” he said. (Philipp Grüll | EURACTIV.de)

Level 5 Restrictions to continue in Ireland. The Irish government has decided to extend level 5 restrictions in the country until 5 March, Taoiseach Micheál Martin announced on Tuesday. Read more.

Finland needs quick measures to tackle public debt, say experts. It is high-time for Finland to look ahead and start implementing corrective measures and structural changes, the country’s Economic Policy Council wrote in its report published on Tuesday, adding that the Finnish government successfully steered the country through the pandemic and that increasing the state deficit was justified and adequate. Read more.

Italy’s Conte resigns, aims to form third government. Italian Prime Minister Giuseppe Conte, who resigned on Wednesday after Italia Viva ministers resigned from his government, is now looking to obtain a new mandate to form his third consecutive government. While he has the support of the centre-left Democratic Party and the 5-Star Movement, he is currently in difficult negotiations with other MPs. Read more.

Confidence of Spanish citizens in COVID-19 vaccines growing very fast. About 58% of Spaniards would now accept to get vaccinated against COVID-19, compared to the 20.2% recorded just three months ago, according to a survey conducted by the Spanish Foundation for Science and Technology (Fecyt), released by the country’s science and innovation ministry. Read more.

One in three Czechs suffers from mental health issues. While one in five Czechs suffered from mental health issues before the pandemic, that number has now risen to one in three, due to the restrictive measures which include self-isolation – which “from an expert point of view, is really a lot,” Petr Winkler from the National Institute of Mental Health told EURACTIV.cz’s partner Hospodářské noviny. Read more.

Hungary to regulate ‘digital damaging’ of tech giants. Hungary’s justice ministry intends to submit a bill in spring “on the regulation of the Hungarian operations of large tech companies”, Justice Minister Judit Varga announced on her Facebook page on Tuesday. Read more.

Slovakia ready to launch new nuclear power plant unit. The third unit of the Mochovce nuclear power plant – one of the three nuclear plant projects currently under construction in the EU – will already be allowed to launch this year, according to a draft decision recently published by Slovakia’s nuclear regulatory authority. Read more.

Foreigners to present negative PCR tests upon entering Bulgaria. Every foreigner who wants to enter Bulgaria between 29 January and the end of April will have to present a negative PCR test taken up to 72 hours before arrival. This includes everyone arriving from the EU, the Schengen Area, and third countries. Read more.

Romania postpones vaccinations appointments due to shortage. Romanian authorities said Romania will postpone part of the COVID-vaccination appointments by 10 days due to a shortage of doses. Read more.

Croatia’s energy development to be based on new, clean technologies. The concept of Croatia’s energy development must be based on new and clean technologies, innovation, and research to improve the quality of life and ensure the economy’s necessary transformation, Prime Minister Andrej Plenković told the digital conference “Energy 2021 – Managing the Green Transition” organised on Tuesday by EURACTIV’s partner, Jutarnji list. Read more.

The issue is expected to take place in the near future, depending on the financial markets’ situation. At the beginning of the month, Slovenia issued €1.75 billion worth of 10-year bonds and supplemented the issue of 30-year-old bonds worth €250 million, borrowing at a negative interest rate on 10-year-old bonds for the first time. Last week, the state treasury repaid €1.5 billion in euro bonds, which Slovenia issued ten years ago and had an interest rate of 4.375%. This represented 40% of the state budget debt falling due this year. The Slovenian government is planning a public debt of 82.4% of the GDP by the end of this year.  (Željko Trkanjec | EURACTIV.hr)

Serbia to spend €2.5 billion to aid recovery from coronavirus crisis. Serbia plans to spend about €2.5 billion in loans and subsidies to businesses and payments to pensioners and other citizens to help them cope with the economic impact of the coronavirus, President Aleksandar Vučić said on Tuesday (26 January). Full story here.

According to BiH’s foreign ministry, the Ukrainian ambassador said his country had never permitted the icon’s export. Dodik has said that the icon was given to him as a gift by a person whose name he does not know. He said he would give the disputed work of art back to the unknown donor and ask him to explain how it came into his possession. (Željko Trkanjec | EURACTIV.hr)

Light magnitude earthquake strikes 38 km northwest of Tirana. A 4.4-magnitude-earthquake was felt near Tirana Tuesday afternoon, the German Research Centre for Geosciences (GFZ) reported. According to preliminary data, the quake was located at a depth of 10 km. Shallow earthquakes are felt more strongly than deeper ones as they are closer to the surface, volcanodiscovery.com reported.

Although the earthquake was felt in Bulgaria, BiH, Croatia, Greece, Italy, Kosovo, Montenegro, Serbia, and North Macedonia, no victims or damage were reported. Northwestern Albania was struck by a 6.4-magnitude earthquake that killed 51 people on 26 November 2019. (Željko Trkanjec | EURACTIV.hr)