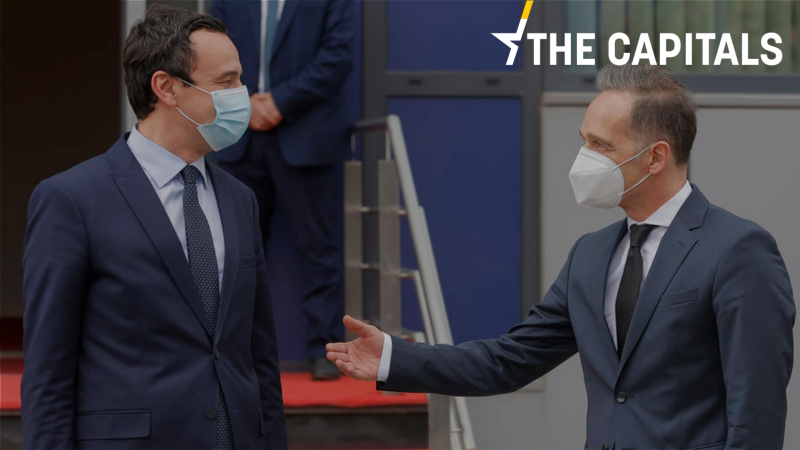 Before you start reading today’s edition of the Capitals, feel free to have a look at the article Own academy could help EU’s diplomatic service find its footing, by Alexandra Brzozowski.

German Foreign Minister Heiko Maas has rejected a redrawing of borders in the Western Balkans along ethnic lines and the idea has been “put back into a drawer”. Read more.

Belgium’s Consultation Committee meets on the application of reopening terraces. Belgium’s Consultation Committee will meet later on Friday afternoon regarding the concrete modalities of already agreed relaxation of measures, such as the reopening of the terraces and how many people can sit around a table and until what time. Ministers will also discuss perspectives for the culture and events sector. (Alexandra Brzozowski, EURACTIV.com)

Swiss president heads for damage control EU summit. Swiss President Guy Parmelin heads to Brussels on Friday for a summit with European Commission President Ursula von der Leyen over a stalled treaty that threatens to put ties between Switzerland and its biggest trading partner into a deep freeze. Read more.

MEPs set date for Brexit vote but warn London ‘no new concessions’. EU lawmakers are set to finally ratify the bloc’s post-Brexit trade agreement with the UK after the European Parliament’s political group leaders set next Tuesday (27 April) as the date to take a plenary vote on the deal. Read the full story.

Huawei challenges Swedish 5G ban in court. Chinese telecom giant Huawei has filed a case against Sweden’s telecom regulator after the company was banned from participating in 5G auctions in Sweden and telecom operators were ordered to remove their technology before the end of 2024. Read more.

Italian government to unveil Next Generation EU recovery plan. Italian Prime Minister Mario Draghi will present the Italian plan for the Next Generation EU programme to the Council of Ministers on Friday. According to drafts, the plan foresees the allocation of €221.5 billion, of which €191.5 billion will come from the EU and €30 billion from a complementary fund created by the government, business daily Il Sole 24 ore reported.

The plan will be accompanied by indicators for some reforms to be approved, such as those relating to public administration, justice, the simplification of bureaucratic procedures, and new rules for the production of energy from renewable sources. (Daniele Lettig | EURACTIV.it)

Recovery funds begin to arrive in Spanish regions. The Spanish government has in the last weeks already advanced €2.1 billion of its coronavirus recovery programme, amounting to 7.9% of the €26 billion Spain is expected to receive in EU funds this year, Spanish financial media reported. Read the full story.

Greece offers immunity to those handling the COVID-19 crisis. The Greek government has pushed forward a last-minute amendment in a bill offering immunity to all those dealing and making decisions regarding the ongoing pandemic. Read more.

Poland has Europe’s highest mortality rate. Poland recorded the highest number of COVID-related deaths in Europe last week, according to WHO data. Meanwhile, the country’s surplus death rate during the pandemic in relation to the 2016-2019 period was the highest in the EU as it amounted to 23.5%, according to Eurostat figures. Read more.

Zeman still silent on the Czech-Russian dispute. Czech President Miloš Zeman has so far remained silent on his country’s biggest diplomatic dispute in modern times after the government said it believes Russian GRU agents were behind explosions at a Czech ammunition depot in 2014. Zeman – known for his pro-Russian views and for excusing the regime in the past – has said he will comment on the matter on Sunday. Read more.

The Czech Republic on Thursday also ordered Russia to remove most of its remaining diplomatic staff from Prague in an escalation of the worst dispute between the two countries in decades. Read more.

Hungary to build Budapest campus of Chinese university with Chinese loan. The Hungarian government is planning to build a Budapest campus of the Chinese Fudan University with Chinese contractors, financed by a €1.25 billion loan from China, it emerged this month. The controversial project has sparked a row between the Hungarian government and the municipality of Budapest. EURACTIV’s media partner Telex takes a closer look.

In other news, Hungary has reached 3.5 million people vaccinated on Friday, PM Viktor Orbán posted on his Facebook page. Orbán’s chief of staff Gergely Gulyás suggested Hungary could reach the 4-4.5 million jab mark next week, and whoever registers now can get their vaccine in as little as a week or two. According to the government’s spokesperson, 1% of those who have been vaccinated with the first dose catch the virus. (Vlagyiszlav Makszimov, EURACTIV.com)

Bulgarian university professor fired after protest against Borissov. Academic Martin Osikovski has been fired on disciplinary grounds from his post at Sofia’s University of National and World Economy days after criticising a pre-election appearance of Prime Minister Boyko Borissov at the institution on 2 April. Read more.

Romanian authorities: No recovery relief funds for irrigation. The European Commission has told Romanian authorities that irrigation works could not be funded by the Recovery and Resilience Facility and that the government allocated too large a share of the fund to transport infrastructure. Read more.

Transition to net-zero emissions to cost Slovenia up to €27 billion. Slovenia expects to spend between €21-27 billion to achieve net-zero greenhouse gas emissions by 2050 in line with EU targets on climate neutrality. Read more.

Israel, Croatia and BiH cantons to develop economic cooperation. Diplomatic representatives of Croatia and Israel met with local cantonal authorities in Široki Brijeg in Bosnia and Herzegovina (the part where Croats form the majority) on Thursday to discuss joint economic projects for which Croatia has earmarked funds this year, Hina news agency reported.

Representatives of Croatia and Israel visited three cantons in BiH that border with Croatia over the past three days in an effort to motivate economic cooperation between the three countries.