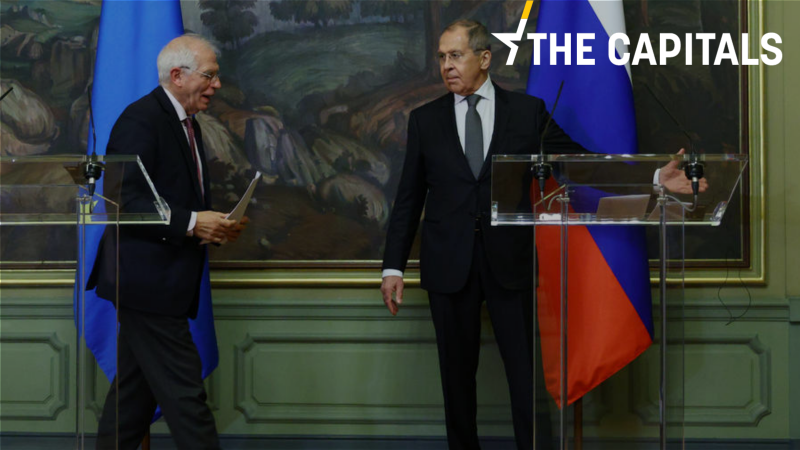 Before you start reading today’s edition of the Capitals, feel free to have a look at the exclusive op-ed “A ‘Résumé’ following the visit to Moscow” by Andrzej Sadoś is the permanent representative of Poland to the European Union.

Berlin, Stockholm, Warsaw expel Russian diplomats. Germany expelled and classified a Russian diplomat as “persona non grata” on Monday in response to Moscow’s expulsion of EU diplomats on Friday, which the German foreign office said was “in no way justified”. Poland, and Sweden also expelled Russian diplomats the same day, which Tagesschau reports was a closely coordinated move between the three governments and the European External Action Service, citing sources in the German foreign ministry. This is the latest escalation in the row over the poisoning and now imprisoning of opposition politician Alexei Navalny. Read more.

France hit by new cases of South African variant. College Jules Ferry in Eaubonne, north of Paris, had to shut down after two positive cases of the South African variant were detected on Monday. A free and massive three-day screening campaign will start Tuesday for the town of 25,000 inhabitants, with priority going to college students and their families. Read more.

Students to be vaccinated locally? KU Leaven Rector Luc Sels has callrf for vaccinating students in the city where they study, who would not have to go home for their injection and it would mean fewer people travelling across the country. “We have large faculties of medicine, biomedical sciences and nursing courses in those large student cities. We do have a fair amount of capacity,” Sels told De Standaard. (Alexandra Brzozowski, EURACTIV.com)

Gove demands ‘refinements’ of Irish protocol. The UK will demand changes to the Northern Ireland Protocol in talks with the EU in the coming days, Cabinet Office minister Michael Gove said on Monday (8 February).

Speaking during a hearing with UK lawmakers on the European Scrutiny committee on Monday (8 February), Gove repeated the government’s demand for the Northern Ireland protocol to be re-opened, telling MPs that there were “a number of areas where we need refinements”. More.

Ireland to discuss Article 16 mishap with EU Commission. Irish representatives will touch base with Commission officials on Tuesday to probe the ins and outs of the EU executive’s shortlived decision to invoke Article 16 of the Northern Ireland Protocol. Read more.

Economic gap between Finland and other Nordic countries widens. While Sweden and Norway’s economies are expected to respectively grow by 20% in the next 10 years, growth in Finland over the same period is only expected to see a 10% increase, according to a report issued by the Finnish finance ministry on Monday, prompting Finance Minister Matti Vanhanen to ask whether Finland wants to be a Nordic welfare country in future. Read more.

New Italian PM-designate Draghi presents government programme. While Italian Prime Minister-designate Mario Draghi met with parliament’s smaller parties on Monday as part of his second round of consultations to form a new government, he presented some of his plans, which included launching a special employment and job plan, reforming the school system, and speeding up the COVID-19 vaccination plan.

The new government will “reshape the school calendar” this year by extending lessons until the end of June, and hire more teachers to make up for the months students spent distance learning due to the coronavirus, said the former head of the European Central Bank (ECB). For years, the Italian school system has been suffering from the effects of budget cuts.

In other news, the leader of the eurosceptic, right-wing Northern League, Matteo Salvini, who is on trial over alleged migrant kidnapping during his time as interior minister and recently backed a Draghi government – has said that “on the issue of immigration we will propose the adoption of European legislation. It is good for us that immigration in Italy is treated as in France and Germany, with the same rules”. (Daniele Lettig | EURACTIV.it)

About two-thirds of Portugal’s catering sector insolvent due to COVID-19. While two of three companies in Portugal’s catering sector have said they were not able to pay wages, almost 60% have said they were insolvent, according to a survey carried out by Restaurant Association PRO.VAR, which is calling for the COVID-stricken sector to benefit from additional measures. Read more.

Czechia currently losing the information war. “It is time to back off. The government ignores us so there is no point in continuing,” František Vrabel, the head of the leading analyst company focusing on the fight against disinformation known as Semantic Visions, told EURACTIV.cz’s media partner Hospodářské noviny on Monday, confirming that Semantic Visions has decided to withdraw from cooperating with the Czech health ministry. Read more.

‘Don’t we have better text for this?’ Hungary’s chief medical officer appeared to be disingenuously citing the public health situation in order to prolong replying to a freedom of information request regarding an EU funded project on Monday. Read more.

Slovakia’s coalition divided over lost €1 billion from EU fund. Slovakia irretrievably lost €1 billion from the European Regional Development Fund as it did not reallocate the funds by the end of 2020, MEP Lucia Ďuriš Nicholsonová (ECR) has said. While coalition partner and Vice-Prime Minister Veronika Remišová – who is the minister responsible for relocating EU funds in Slovakia  – called it “deceptive” news, PM Igor Matovič commented on the coalition rupture, requesting Ďuriš Nicholsonová to discuss “such a serious failure directly with Remišová before calling for a press conference”. Read more.

MEPs plan rule of law mission to Bulgaria. The European Parliament’s Democracy, Rule of Law and Fundamental Rights Monitoring Group (DRFMG) will vote on whether to organise an on-the-ground mission in Bulgaria to study the corruption and rule of law situation in the country, announced MEP Elena Yoncheva (BSP/S&D), who is the only Bulgarian representative in the 14-member DRFMG. Read more.

No pension hikes in Romania this year. As the Romanian government has announced budget expenditure cuts for this year, an increase in public pensions is planned for 1 January 2022 rather than this year, said Romania’s former prime minister and leader of the centre-right coalition’s largest party PNL, Ludovic Orban. Read more.

Croatia to buy fighter jets from US or France. The interdepartmental commission has recommended the Croatian government choose between the new American F-16 Block 70 and the used French Rafale fighter planes, according to unofficial information, EURACTIV’s partner Jutarnji list reports. Read more.

Hungary receives NATO support to appoint new KFOR commander. Hungary has received support from NATO to appoint a new Kosovo Force (KFOR) commander, the Hungarian army’s chief-of-staff, Ferenc Korom, told the Belgrade based Balkan Security Network in an interview on Monday, adding that, according to Hungary, the international mission in Kosovo was “a high-priority military operation”. Read more.

Slovenia’s president and prime minister on opposite sides on Culture Day. While Slovenian Prime Minister Janez Janša called on the cultural sphere to have a more constructive attitude to the current coronavirus situation rather than “street activism and threats” during his Culture Day address – according to Slovenian public television – President Borut Pahor called for a culture of dialogue, saying he has noticed more careless and unfriendly speech and that the mood depends on public dialogue. Read more.

Slovenia to reduce troop size in KFOR mission. Slovenia will reduce the number of troops currently serving in the NATO KFOR mission in Kosovo due to forced realignment, announced the country’s defence ministry on Monday after Defence Minister Matej Tonin and the army’s chief of the general staff Major Robert Glavaš met with KFOR commander Major General Franco Frederici and Slovenian troops currently serving in the NATO mission.

Slovenia would redirect part of its forces from Kosovo to BiH and other EU and NATO missions and operations. Even after the transfer of part of the forces from Kosovo, KFOR will still be the most important Slovenian mission, where the majority of members of the Slovenian Armed Forces operating outside the borders of the Republic of Slovenia will be present. Exactly how many of the more than 250 troops stationed in Kosovo at the three locations will be relocated was not clear from the statements. (Željko Trkanjec | EURACTIV.hr)

“This step was made in response to Albania’s decision to expel the First Secretary of the Russian Embassy in Tirana over a contrived pretext,” the ministry added, TASS reported. On 21 January, the Albanian government declared the Russian diplomat ‘persona non grata’ for violating coronavirus measures, Albania’s Top Channel reported. (Željko Trkanjec | EURACTIV.hr)