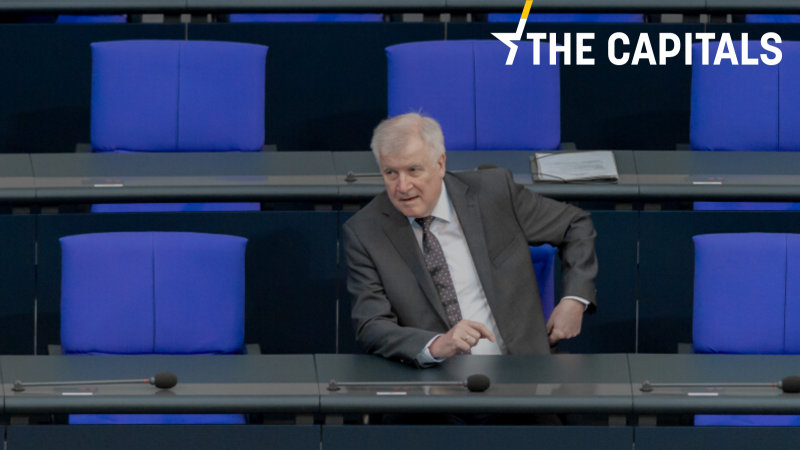 Interior Minister Horst Seehofer: "Obviously inadmissible or unfounded applications should be rejected immediately at the external border, in which case no entry into the EU is allowed." [Shutterstock]

Before you start reading today’s edition of the Capitals, feel free to have a look at the “Superbugs: last call for action” op-ed written by EU health chief Vytenis Andriukaitis and Japan’s Minister for Health Kato Katsunobu on the occasion of the Antibiotic Awareness Week (18-24 November). Also feel free to have a browse of the first entry of our Special Report on generational renewal in agriculture, which will be available in several languages.

Read also: Progress is too slow in the fight against ‘superbugs’, auditors warn

This must be “effectively prevented”, Seehofer said on Sunday (17 November) in Berlin, adding that for a necessary “new start” in migration policy, the protection of the EU’s external borders must also be “urgently improved” by strengthening the EU’s border and coast guard agency, Frontex.

Seehofer also advocated for the creation of a “robust procedure” to be able to carry out an initial examination of protection requests even before entering Europe.

“Obviously inadmissible or unfounded applications should be rejected immediately at the external border, in which case no entry into the EU is allowed,” he said.

The Dublin system should be replaced by “establishing firm responsibilities for the examination of requests for protection”, he added.

Last week, the EU Court of Auditors published a report on migration in Italy and Greece. Regarding Frontex, the auditors noted that Frontex had actually deployed more staff than needed to the Italian hotspots, which were found to be empty or almost empty.

Meanwhile in Sarajevo, the Head of the EU Delegation to BiH, Johann Sattler, said that measures to protect the EU’s external borders from illegal migration, including Croatia’s border with Bosnia and Herzegovina, must respect fundamental human rights, including the right to asylum.

Sattler recalled that €36 million worth of EU funds had been earmarked for BiH since the beginning of 2018, and 94% of those funds have been directed to finance migrant reception camps, while the remaining 6% of these donations went to boosting BiH’s border control capacity. The EU representative said that the EU would continue to engage in finding “sustainable and acceptable solutions for all” through dialogue and consultation with the authorities of BiH”.

Fewer Gilets Jaunes. 28,500 Yellow Vests protesters took to the streets on Saturday (16 November), one year after the first demonstration against the carbon tax took place in France. Compared to the 270,000 protesters who took to the streets in 2018, participation was significantly low. However, In some cities, including in Paris, violent incidents took place, and more than 200 people were arrested. According to France’s Interior Minister Christophe Castaner, some protestors participated with a purpose to cause destruction. (EURACTIV.FR)

#thisisourculture. The Flemish government announced plans to cut funding for the cultural sector, arts institutions and heritage preservation by 60% in 2020, a cutback which would significantly impact the availability of project grants. In response, a hashtag campaign, whereby more than 200 artists held parts of their works behind bright yellow banners, the Flemish national colour, went viral over the weekend. “This drastic reduction of investment resources is not only a sign of a political agenda becoming too ideological. Today, journalists, ethnocultural associations and civil society organisations are also targeted. We are in solidarity with them,” Kobe Matthys from the State of the Arts organisation commented. (Alexandra Brzozowski | EURACTIV.com)

Labour on Free Movement.  Labour leader Jeremy Corbyn hinted over the weekend that his party might back plans to maintain the free movement of people between the UK and the EU, post-Brexit. “My instinct is to recognise that economies are interdependent around the world, that we all benefit from people moving to, living in and working in different societies and we benefit massively from the vast number of overseas students that come here,” Corbyn said on Sunday (17 November), speaking to the BBC’s Andrew Marr.

“I don’t want to turn my back on that. I don’t want us to become an isolated society. I’m proud of the diversity of our society and our country, and I want that to be the basis of how we live,” the Labour leader said.

When pressed by the BBC on whether Corbyn could give any cast-iron guarantees on Labour’s commitment to maintaining the free movement of people, he said that more details would be disclosed at Labour’s manifesto launch this Thursday. (Samuel Stolton, EURACTIV.com)

Conte fight back. The decision to stop production in Taranto of ILVA, Europe’s largest steelworks, “is a clear violation of the contractual commitments and grave damage to the national economy,” said Italy’s PM Giuseppe Conte. According to Conte, Franco-Indian giant ArcelorMittal is assuming a great responsibility in quitting a deal to take over the group and would pay damages in court, as the government has filed an appeal against the decision. EURACTIV’s media partner ANSA has the story.

Commission happy with the smoking ban. “I am very pleased to hear that the Greek authorities are taking smoking in public places seriously. This ban represents progress that is long-overdue. The protection of health should be the priority of public policies, and it is always good to see when this is put in action,” the EU’s Health Commissioner, Vytenis Andriukaitis, has said.

Greece’s conservative New Democracy government has decided to implement a smoking ban in enclosed public places which has been in place for many years now. (Sarantis Michalopoulos | EURACTIV.com)

Fearing a slowdown. According to the latest poll of SW Research, 60% of Poles are afraid of the consequences of a possible economic slowdown, with only 18% saying they are not. This comes at a time when the ruling PiS is preparing voters for the possibility of a crisis, with Jarosław Kaczyński, its leader, saying that he does not want to use the term “crisis” but that his party would have to ‘push away’ the dangers of an economic slowdown.

Considering that the Polish economy is very dependent on Germany, it has already tumbled to 3.9% growth in the third quarter, while growth was estimated to reach more than 4% over that period.  (Łukasz Gadzała | EURACTIV.pl)

Gas politics. Poland’s state gas company PGNiG announced it would stop importing natural gas from Russia’s Gazprom when a long-term contract expires in three years unless it can secure better commercial terms. Instead, Warsaw seems interested in striking long-term contracts for deliveries of LNG gas from the US and other countries, while also developing a new pipeline with Norway. The move is part of a strategy to reduce energy dependency from Moscow, which frequently uses gas as a tool to exert political pressure over its neighbours. (Alexandra Brzozowski | EURACTIV.com)

Velvet revolution anniversary. Slovakia celebrated the 30th anniversary of the 1989 Velvet revolution over the weekend. State representatives, leaders of the revolution, civil society organisations and thousands of citizens took to the streets commemorating the peaceful demonstrations in Czechoslovakia that ultimately overthrew the communist regime.

An opinion poll commissioned by TV Markiza asked citizens what they miss the most from the former era and what they would miss most should the regime return.

Almost 30% would miss the guarantee of employment and social security in a wider sense, while more than 40% would primarily miss the freedom of movement should democracy be abandoned for communism again. And 20% of respondents would miss citizens’ rights and freedoms. (Zuzana Gabrižová | EURACTIV.sk)

250,000 people against Babis. Around 250,000 people joined yet another demonstration against PM Andrej Babiš at Prague’s Letna plain on Saturday (16 November), according to the police. The organising Million Moments for Democracy group said that 300,000 demonstrators took to the streets.

The group is asking Babiš to resign by the end of the year and vows to step up protests unless he fires controversial Justice Minister Marie Benesova and gets rid of the giant Agrofert holding. (Ondřej Plevák |EURACTIV.cz)

Breaches with EU funds. Hundreds of Bulgarian companies have misused European funding for tourism development in the poorest EU country, the State Fund for Agriculture has said. Last June, it started screening hundreds of projects for small family-run hotels funded by the Rural Development Programme. The authorities were mobilised following media revelations of the programme having been abused.

From 2007 to 2016, a total of 746 family hotels were built with EU money. Still, it was not until 2019 that the Bulgarian authorities discovered that 158 ​​ projects had been implemented and that the owners had to repay €22 million, in full. Violations were also reported in another 95 projects, for which €1.7million had to be returned.

Bulgarian media have been reporting for years about problems with guest houses, but there has been no response from the authorities. (Krassen Nikolov | EURACTIV.bg)

CEU moves to Vienna. Following an intense fight with the government of Hungarian Prime Minister Viktor Orbán, the Central European University (CEU) has admitted defeat and left its now-former campus in Budapest and opened one in Vienna. It is the first time for decades that a university has been forced out of an EU member state. Orbán was not satisfied with the curriculum of the CEU because he had no control over it and had been personally targetting CEU’s founder and financier, Hungarian Jew George Soros.

CEU has provided free or cheap English-language graduate education in Budapest to thousands of students from eastern Europe and beyond, and is regarded as one of the best universities in the region. The Hungarian government has revoked CEU’s ability to issue US-accredited degrees in the country. (Željko Trkanjec | EURACTIV.hr)

An aggressive tweet. Romanian MEP Siegfried Muresan (EPP) tweeted a very aggressive statement against French President Emmanuel Macron, saying: “He questions NATO, he is flirting with Vladimir Putin and he broke the promise Europe had made to Western Balkans by opposing EU accession talks with Albania and North Macedonia. President Macron challenges the order which brought 70 years of peace to Europe. Not good!”.

Christian Democrats will remain in the centre. Speaking at a party congress, Matej Tonin, president of the NSi (EPP), said his party’s ideology would remain in the centre when it comes to values and action opposing both the radical left, as well as ‘wild’ capitalism. Tonin is convinced that NSi will be part of the next Slovenian government.

Mayor of Zagreb will not run for president. Milan Bandić, who has been Zagreb’s mayor for 20 years, decided not to campaign for the country’s presidency. He supported incumbent president Kolinda Grabar-Kitarović, who will be a candidate of governing party HDZ (EPP). According to polls, she will make it to the second round due on 22 December.

This move does not come as a surprise because Bandić wants the approval of the government for his big construction project known as “Manhattan in Zagreb”, which has drawn criticism from the opposition. (Željko Trkanjec | EURACTIV.hr)