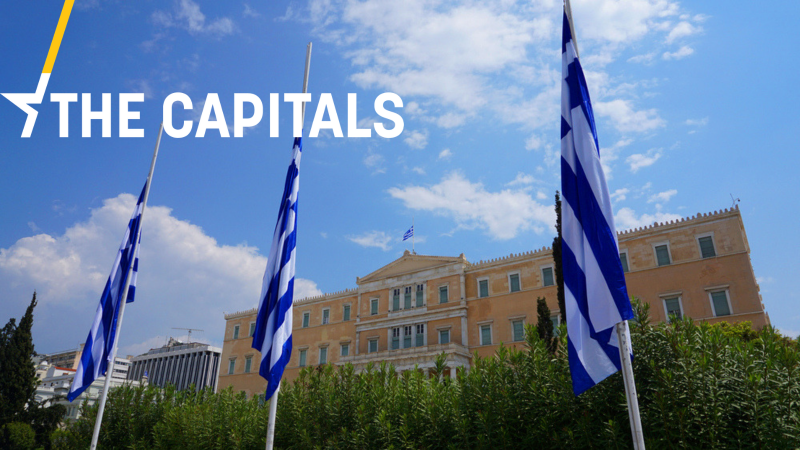 The amount is between €270-309 billion and the government vows to “take all the necessary diplomatic and legal action in order to claim and fully satisfy all the demands of the Greek state for World War I and II”. Voutsis said he would inform the European Parliament and other EU member states about the initiative.

According to Kathimerini, Voutsis said the fact that the report is being debated in Parliament two years after it was submitted to the House was because the government did not want to appear as if it was trying to trade off its debts to international creditors for the compensation claims.

Recently, the News 24/7 news website revealed a letter signed by a number of German leftist, green and socialist lawmakers asking among others that Athens should be compensated for a loan that was forced to grant to the German Reich. (Sarantis Michalopoulos, EURACTIV.com)

Good news, bad news: The Greek economy has been on a positive course for the last couple of years, but its investment competitiveness is backtracking, according to the monthly report of the Hellenic Federation of Enterprises (SEV). Reuters reported that the Greek 10-year state bond yield has fallen to its lowest level since September 2005. “The country now has enough capital and liquidity in order to access the markets and borrow,” PM Tsipras said yesterday.(Theodore Karaoulanis, EURACTIV.gr)

Albania, Montenegro, Kosovo, Macedonia, Serbia, Bosnia and Herzegovina accounted altogether for almost 25% of foreigners with work permits in Germany in 2018. In 2015, they only made up around 9%. Read more here. (Claire Stam, EURACTIV.de)

The taxes’ dilemma: EURACTIV’s partner EFE have organised a debate ahead of the 28 April national elections in Madrid, where a dilemma was thoroughly discussed: raising taxes to improve revenue as well as financing better social policies, defended by centre-left socialists (PSOE) and left-wing Unidas Podemos, or to lower them to boost economic activity, a proposal put forward by centre-right Partido Popular (PP) and centre-liberal Ciudadanos. (EuroEFE.EURACTIV.es)

Rudd for future PM? Work and Pensions Secretary Amber Rudd has hinted that she may mount a bid to become the next Conservative leader, following Prime Minister May’s future departure. May intends to hand in her resignation when her Brexit plans are approved by the House of Commons.

Speaking to BBC Radio 5 Live, while Rudd said that she is currently “not planning to run,” she also said that she is keeping “the door slightly ajar” to the possibility of standing. (Samuel Stolton, Euractiv.com)

Lega candidates: Lots of Eurosceptics and local administrators will run as Lega’s candidates for the EU elections. After serving 18 years as an MEP, Mario Borghezio has been surprisingly excluded from the final list. “Salvini made an inexplicable political mistake,” he said. Other current Lega MEPs such as Angelo Ciocca, Marta Bizzotto, Danilo Lancini and Marco Zanni will stand again.

Among the new faces, there is Professor Antonio Maria Rinaldi, who is recognised as a staunch Eurosceptic, but also Francesca Donato, the president of the association Eurexit that pushes for Italy’s withdrawal from the EU.

Foreign Fighters in Italy: Italy’s Prime Minister Giuseppe Conte said that the government was seriously worried about the crisis in Libya, particularly because it could expose the country to the risk of foreign fighters’ arrival. Conte will address the issue in the Italian Senate next Tuesday. (Gerardo Fortuna, EURACTIV.com)

5G: Poland will most likely not prevent Huawei, the Chinese telecommunications giant, from developing 5G technology on its territory. According to a vice-minister for digitalisation, Huawei will be closely watched as the government mulls new regulations on additional restrictions on the telecommunications market. (EURACTIV.pl)

Ex-PM Fico in an open war with the media: The governing party SMER-SD (PES) has readied itself for a legal battle with the media. “We have put together a strong legal team, which will summarise the events so far and will monitor your behaviour in the next days, weeks and months”, former PM Robert Fico recently told journalists. Media reported this week that one of the team members is the former interior minister R. Kaliňák.

Both resigned last year due to the developments following the murder of investigative journalist Jan Kuciak. Fico is known for his notoriously bad relations with the media and for calling journalists “dirty anti-Slovak prostitutes”. He was particularly displeased lately with media reports on his alleged contacts with an Italian businessman investigated for drug trafficking.  (Zuzana Gabrižová, EURACTIV.sk)

EU Commission will decide on Babiš’s clash of interest: The European Commission will complete its two reports on a possible conflict of interest of Czech PM Andrej Babiš by May 15. Centre-right MEP Tomáš Zdechovský (EPP) informed Czech media about it following a closed-door meeting of EU Parliament’s CONT committee with EU Commissioner Günther Oettinger on Monday 15 April.

Babiš, the second wealthiest Czech, is suspected of still owning the sprawling Agrofert chemicals, food and media group despite having formally transferred ownership to trust funds to comply with the law.

The Czech Pirate party wants the Czech parliament to rally the Commission to make the reports public. (Aneta Zachová, EURACTIV.cz)

The urgency: A special parliament committee for justice has already adopted a report to change the Criminal Code. The committee wants both parliament chambers to adopt the law in its final form next week. Florin Iordache, the committee chief and former justice minister, said the government made “a regrettable error” by not changing the Criminal laws.

The opposition says the government wants to change the Criminal Code in order to save many of its members from jail due to corruption cases. “Criminals are making criminal laws for themselves,” the opposition USR party posted on Facebook. (EURACTIV.ro)

US – Cyprus enter new era: Cyprus could “find a whole new day in its relationship with the US and the West,” US Senator Robert Menendez said following a meeting in Nicosia with Cyprus President Nikos Anastasiades. Senators Menendez (Dem) and Rubio (Rep) recently introduced a bipartisan bill to enhance security and energy cooperation in the Eastern Mediterranean as well as lift a 1987 US arms embargo on Cyprus.

The new US strategy in the region is considering the recent discovery of large natural gas fields and the deterioration of US-Turkey relations. (Theodore Karaoulanis, EURACTIV.gr)

Croatian defence priorities during EU presidency: Defence Minister Damir Krstičević said Croatia’s defence priorities during its EU presidency in the first half of 2020 will be capacity building and implementing the EU’s defence initiative, strengthening the EU-NATO cooperation as well as building up the industrial dimension of defence and joint security in Southeast Europe. (Željko Trkanjec, EURACTIV.hr)

EPP will win EU elections: Although the ruling liberal LMŠ (ALDE) party enjoys the biggest support of voters on national level, it will not win in the EU elections: SDS and SLS (both EPP) formed a joint list and get 16.8% of the support, the social democrats get 11.5% – mainly thanks to MEP Tanja Fajon, and LMŠ stands at 9.7%. (Željko Trkanjec, EURACTIV.hr)

Bracelets for victims and offenders: Serbia will introduce a system of bracelets for the victims of violence and for offenders, as part of a project titled Promotion of Safety of Women in Serbia. The bracelets would send a signal to the police, when a victim is in danger, allowing the police to react promptly. (Beta-EURACTIV.rs)