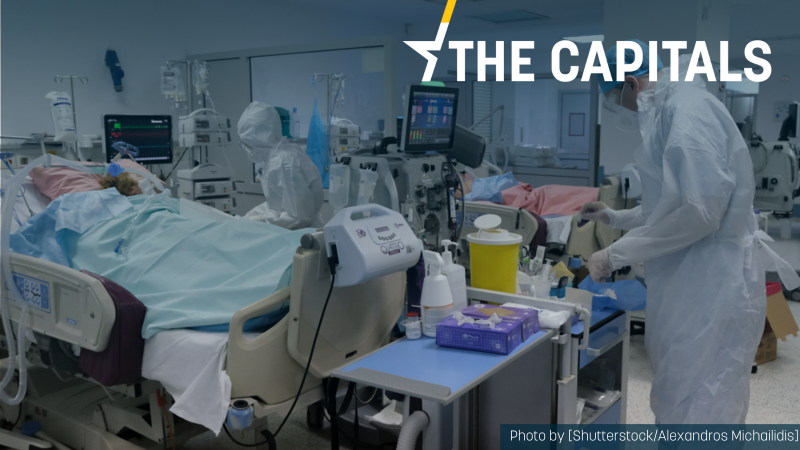 The political debate in Athens heated up last week, when a leaked study conducted by leading epidemiologists Sotiris Tsiodras and Theodoros Lytras found that out of the 3,988 deaths examined, 1,535 were “attributable” to the high load of intubated COVID-19 patients, to being outside an ICU. [Shutterstock/Alexandros Michailidis]

This is the last edition of The Capitals for 2021. EURACTIV Media Network would like to thank you all for your trust and support in our efforts to bridge the communication gap among EU capitals. Informed citizens make well-informed choices, and the EU integration process moves on more transparently and constructively. In 2022, we will expand further, and more innovative ideas are coming up. Stay tuned!

We wish you Merry Christmas and a Happy New Year!

EDITOR’S TAKE: ECDC’s latest map raises questions. The only two “green’ spots of ECDC’s latest map regarding Europe’s epidemiological situation belong to Romania, the second worst-performing country when it comes to vaccinations. We asked ECDC why, but no reply was provided. Read more.

The Greek minister of health is likely to fire health workers in the national health system who insist on not getting vaccinated. The move was criticised by the opposition parties while a study on the lack of ICUs has caused political turmoil in the country. Read more.

Deals reached on carcinogens and TEN-E as Slovenia presidency draws to close. Just before Slovenia hands over the presidency of the Council of the EU to France, member countries have reached final political agreements to update the carcinogens and mutagens directive and to revise the Trans-European Networks for Energy (TEN-E) regulation but disagreed on a proposal to update rules for social security coordination. Read more.

France opens COVID-19 vaccination for children aged 5-11. Children above the age of five can now officially receive the COVID-19 vaccine, Health Minister Olivier Véran announced on Wednesday. “Appointments can begin without delay,” he said, adding that 145 children are currently hospitalised for severe forms of the virus.

The vaccination of children in France is not compulsory. Children will receive one dose of the Pfizer vaccine equivalent to one-third of the adult dose.

Christmas shoppers flock to Belgium and Germany amid hard lockdown. Dutch Christmas shoppers have responded to the strict lockdown imposed by their government over the weekend by shopping and going to bars and restaurants in Germany and Belgium. Although crossing the borders is allowed under the current rules, the Dutch border-hoppers have been criticised by authorities in all three countries. Read more.

Belgium’s COVID-19 measures to tighten right after Christmas. The government’s consultation committee decided on Wednesday to adopt new measures to help curb the spread of the Omicron variant in Belgium, which will come into effect from 26 December. Read more.

Austria is playing with time before Omicron takes hold. Austria will take additional measures to fend off the spread of Omicron until more intensive care units are free and more data about the new variant is available. Read more.

Hogmanay at risk amid Omicron uncertainty. New Year’s Eve parties could be over before they started as the government weighs up whether to impose restrictions after Christmas amid uncertainty over the impact of the Omicron variant. Read more.

Irish government expands pandemic business supports. Dublin has announced a series of updates to the pandemic support schemes available, as businesses face continuing restrictions amid the surge of the Omicron variant. Read more.

Santa Claus travels in a sustainable way. In the parliament’s plenary session preceding the holiday season, the honour of asking the traditional Christmas question was given to the Chair of Finns Party, Riikka Purra. Purra shared her party’s concern over Santa’s ability to deliver presents in these exceptional times in her question to the government. What measures is the government planning to adopt to secure Santa’s working conditions, she asked? Read more.

‘Then I understood what they want’: Unmasking the Belarus border attack. Belarusian officers used migrants as pawns to attack the EU border, handing out axes and pelting Polish guards with stones. The investigation team of EURACTIV’s media partner LRT.lt has pieced together a chronology of events with exclusive witness testimonies revealing the scale of the Belarusian regime’s involvement. Read the full story here.

Spain imposes outdoor facemask mandate, again. The government on Tuesday approved a measure mandating the use of facemasks outdoors even if social distancing can be respected, in a new move to curb the fast increase in cases of COVID-19’s Omicron variant. Read more.

Commission approves further aid to state airline TAP. On Wednesday, the European Commission approved a further €71.4 million of Portuguese state aid to TAP, one day after approving the restructuring plan and €107.1 million of aid due to the pandemic. Read more.

Pegasus scandal may open another front in Poland’s conflict with Brussels. MEPs want the European Commission to investigate the recent revelations concerning the use by Polish government entities of the Pegasus software against a prominent lawyer and a prosecutor. The spying scandal may add fuel to the country’s ongoing conflict with the EU over the rule of law. Read more.

Commissioner Jourova: journalism a risky profession in some EU states. In some EU member states, journalism is a “genuinely risky profession”, European Commission Vice-President Věra Jourová told EURACTIV.cz in an interview, adding that she “will negotiate with these states bilaterally”. Read more.

Defence Minister’s NATO stance creates new tensions. Defence Minister Stefan Yanev’s stance that there is no need to deploy additional NATO troops has created serious political tensions in Sofia. Prime Minister Kiril Petkov reacted immediately by saying the minister had expressed his personal position, which should not have been expressed in this way. Read more.

Croatia offers up to €26,000 for returning expats to start a business. Croatians opting to return from other EU countries and start their own business in Croatia will receive grants up to 200,000 kuna (€26,000) as part of the new “I choose Croatia” scheme, Prime Minister Andrej Plenković has announced. Read more.

Slovenia opts for moderate pre-Christmas tightening of restrictions. Slovenia has opted for only a moderate tightening of coronavirus restrictions before the Christmas holidays amid a persistent fall in cases that contrasts with the surge of the Omicron variant in many other European countries. Read more.

“This is in line with the fundamental interests of our brotherly peoples and contributes to the stability and security of the European continent,” Putin wrote in the letter to Vučić, which was presented on Wednesday by the Russian ambassador to Serbia, Alexander Botsan-Kharchenko, and announced by the Serb president’s press office. Putin added that their “recent negotiations in Sochi have fully confirmed the strength of the strategic partnership between Russia and Serbia and allowed the laying down of new perspectives of mutually beneficial cooperation in several directions.”  (EURACTIV.rs | betabriefing.com)

Belgrade University annuls finance minister’s doctorate. The Senate of the University in Belgrade on Wednesday annulled the doctorate of Finance Minister Siniša Mali, which he obtained in 2013 at the Faculty of Organisational Studies, because of plagiarism. Read more.

Discrimination in BiH still alive, says appellant in 12-year-old ECHR case. Discrimination has “not been eliminated” in Bosnia and Herzegovina, according to Dervo Sejdić, president of the Roman information centre Kali Sara, and appellant in the Sejdić-Finci case at the European Court of Human Rights 12 years ago. Read more.

The EU Delegation to BiH confirmed that Milorad Dodik, Serb member of the tripartite BiH Presidency, informed the Commissioner about his intentions to call the session but that “this does not in any way imply assent or acceptance of these plans.” “Indeed, Commissioner Várhelyi argued against these plans,” read the statement. (Željko Trkanjec | EURACTIV.hr)

Personal data including salaries of over 600,000 Albanians leaked. The personal data, including the name and salary of some 637,138 Albanian citizens, was leaked in the second significant data breach of the year. Read more.