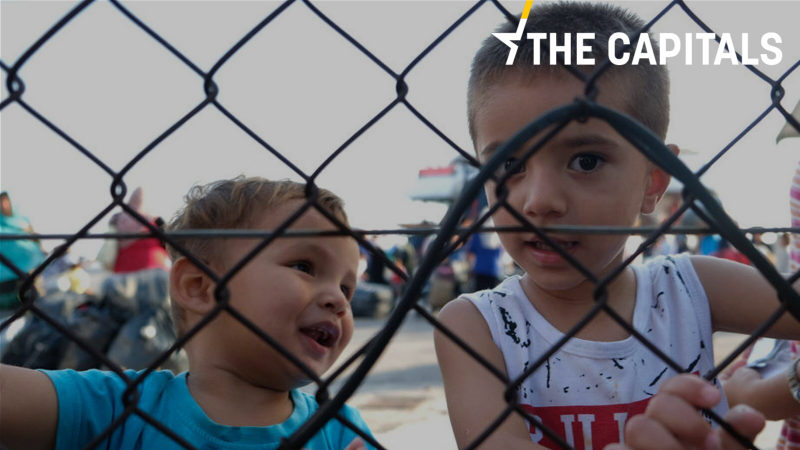 Greece has decided to toughen the criteria for both applying and approving asylum status applications. [EPA/NIKOS ARVANITIDIS]

Before you start reading The Capitals today, take a look at “Commissioner hearings: Sefcovic/Hogan/Gabriel” as well as EURACTIV’s Beatriz Rios’ story on Commissioner-designates for Hungary, László Trócsányi, and Romania, Rovana Plumb.

Also, do not forget to check this week’s entries to our special reports. Take a look at “Organic wine gradually leaving its mark in the French industry“, as well as EURACTIV’s Frédéric Simon’s interview with the director of the Centre for Energy at the French Institute for International Relations (IFRI).

Tough measures. Greece’s conservative government has decided to toughen its migration and refugee policy, following the death of a woman in the blaze at the overcrowded Moria camp on the Greek island of Lesbos. The government said that the number of those illegally entering the country has increased, and according to data, they are mainly migrants and not refugees.

The arrivals of migrants and refugees to Greece from Turkey have reached a two-year high. More importantly, Greece’s Deputy Minister of Citizen Protection, Giorgos Koumoutsakos, recently warned that thousands of Syrian refugees are gathering in Turkey’s Izmir. Greek PM Kyriakos Mitsotakis recently called on the EU to commit more money to help turkey stem the rising flow of migrants better.

Greece has decided to toughen the criteria for both the application and approval of asylum status applications, and to strengthen security at the border. The country will also construct new (closed) pre-deportation centres for illegal migrants and aims to return 10,000 migrants to their home countries by 2020.

Moreover, the Greek government officially announced a joint initiative by Bulgaria, Cyprus and Greece at the EU Justice and Home Affairs Council on 7-8 October, where they will present a joint document on the issues related to the migration route in the eastern Mediterranean.

Leftist party Syriza, the main opposition force, accused the government of inaction. The party also criticised the government for being absent from critical EU meetings on migration, such as one among Italy, Malta, France and Germany on sharing the burden of asylum seekers.

However, Greece was not invited because the meeting referred to refugees and migrants who arrive via sea only from North Africa.

The news website New247 published an article entitled, “The European Way of Death“. The author wrote that “a continuing crime is being committed in Moria, with the responsibility of the Brussels authorities and the governments of Greece. Either we will have a plan with respect for humanity or new tragedies should be expected in the near future”.

Greenlight for North Macedonia. Despite misunderstandings between the two countries over their history’s past, Bulgaria has said that it will not block the start of North Macedonia’s EU accession talks at the 17-18 October EU summit. However, Sofia reserves its right to veto the pre-accession process, but at a later stage. Bulgarian PM Boyko Borisov has called on North Macedonia to end the “murderous war” against Bulgaria over history.

But on Sunday, Deputy Prime Minister Krassimir Karakachanov (VMRO) said he would step down if Borisov backed North Macedonia’s path towards EU accession.  North Macedonia PM Zoran Zaev said Skopje would take into account Borisov’s position and stressed that an agreement could be reached.

Meanwhile, Greece’s former PM Alexis Tsipras visited Skopje yesterday (30 September) and met with Zaev. “We have shown that in the Balkans, we can confront nationalism with a vision for the future […] now it is time for the EU to do the same, by giving the green light for the start of accession negotiations for North Macedonia,” Tsipras said.

The conservative Mitsotakis government (EPP), which fiercely opposed the name change deal, will not block North Macedonia’s EU accession path. However, this will likely trigger reactions within the party, particularly hardliners, notably because opposition to the Prespa Agreement has been New Democracy’s flagship proposing during the pre-election campaign, something that irritated many in Brussels.

Read more on The Brief “The Balkans’ moment of truth” written by EURACTIV’s Editor-in-Chief Zoran Radosavljevic.

PSOE or deadlock. In a rally in Madrid on Monday (30 September), acting Prime Minister Pedro Sánchez asked Spanish voters to either support the country’s current political paralysis or vote for a stable socialist government, EURACTIV’s partner EuroEFE reported. In his view, forming a government with his party, the Spanish Socialist Workers’ Party (PSOE) is currently “the only viable option” to create a stable executive.

“Government or deadlock”, he said, adding that Spain has many challenges to tackle, such as a sluggish economy. “Whoever wants a blockade has many choices from the right and left, but whoever wants a cohesive government, has PSOE,” Sánchez said.

On the sensitive Catalonia issue, Sánchez asked separatists“not to play with fire” and condemned violence in all its forms because, according to him, Catalans “do not want independence, they want coexistence”. (Fernando Heller | EuroEFE.EURACTIV.es)

BUCHAREST
Romania will propose another EU Commissioner. The socialist party PSD will propose another person for the next EU Commission after the European Parliament’s JURI Committee rejected Rovana Plumb. Prime Minister Viorica Dăncilă has criticised MEPs for exceeding the regulatory framework of the EU House. Dăncilă said Plumb’s rejection was politically-motivated. She added that Plumb had not infringed national legislation and that EU law does not provide anything about her case.
PSD will probably come up with a new name at an Executive Council meeting scheduled on Tuesday, and Dăncilă declined an invitation from President Klaus Iohannis for consultation on the matter.  (EURACTIV.ro)

Hey big spender. The Conservatives have pledged a series of substantial investment plans at the Tory party conference in what Chancellor Sajid Javid has dubbed an “infrastructure revolution.” Javid has put forward plans to invest £25bn in road projects, £220m in bus improvement projects and £5bn for digital infrastructure.

He confirmed that money would also be put aside for youth services, and he has pledged to raise the National Living Wage to £10.50 over the next five years.

However, the move was criticised by the opposition Labour party on Monday (30 September), with the shadow chancellor John McDonnell, calling the plans a “pathetic attempt at catch-up.” The investment commitment follows a protracted period of Conservative-led cuts to public spending following the 2008 economic crisis. (Samuel Stolton| EURACTIV.com)

Split on EPP membership? In a TV interview, Lega’s number-two, Giancarlo Giorgetti, suggested that the door was open for his party to join the centre-right group in the European Parliament, the European People’s Party (EPP). Lega’s leader Matteo Salvini, however, has denied the rumours, saying that there are no immediate plans for such a move.

Although Giorgetti did not reply, a debate on EPP membership within the party could result in questioning Salvini’s leadership. EPP member Forza Italia welcomed Giorgetti’s proposal, hailing the news as a significative step forward for the building up of a more stable centre-right coalition in Italy. (Gerardo Fortuna| EURACTIV.com)

Two days ago, three former presidents warned that a PiS majority would practically mean: “Sliding towards authoritarian dictatorship”. PiS has already reacted aggressively to the media criticising its actions, and has also attacked NGOs and state institutions, the ones that have until now remained independent, according to EURACTIV Poland.

Particularly, Slovak MEP Vladimír Bilčík (SPOLU/EPP) reminded Šefčovič that during the campaign, he had praised a Slovak government decision not to ratify the Council of Europe’s Istanbul Convention on fighting violence against women.

When asked how he would address this issue in his capacity as EU Commissioner, Šefčovič replied that he fully supports Ursula von der Leyen’s plan to include violence against women to the list of EU crimes.

Czechs fulfil Paris climate deal, what about others? Czech PM Andrej Babiš met his Finnish counterpart Antti Rinne on Monday (30 September). Babiš said that Prague was fulfilling its commitments in terms of the Paris Agreement but added that it would be good to know the state-of-play in other European member states.

Right to defend. The Czech Senate proposed an amendment to the Charter of Fundamental Rights and Freedoms that would incorporate the right for people to use a weapon, under certain conditions, to defend themselves and others into the Czech Constitution.

The initiative is based on a petition signed by 102,000 people in reaction to the new EU’s Firearms Directive that restricts the possession of weapons. The Czech Republic took legal action against the directive and is currently waiting for the EU Court of Justice to issue its ruling. (Aneta Zachová | EURACTIV.cz)

Problems with waste. Mile Horvat, State Secretary in the Ministry of the Environment and Energy, said that Croatia has “ambitious but achievable” goals on Monday (30 September). By 2020, the country aims to separate and recycle 50% of waste paper, metal, plastic and glass, and 70% of construction waste. Currently, the figure stands at 30%.

Her declaration of financial interests is available on the official website of the European Parliament and is dated 12 September. The only problem is that Šuica does not state the value of the real estate declared. GONG, a non-governmental organisation close to the opposition, lashed out against Šuica and urged her to put an end to years of speculation on the origin of her assets. GONG sent numerous letters to EU institutions and MEPs on the matter. (Željko Trkanjec, EURACTIV.hr)

Nagging before Kosovo elections. Serbian Deputy PM and Foreign Minister, Ivica Dačić, has said that the government in Priština is trying to prevent Serb Ticket, the leading Serbian party in Kosovo, from winning in the snap elections on 6 October. Commenting on the banning of a Serb Ticket campaign spot, Dačić said it was an inappropriate measure. (EURACTIV.rs)

BiH to expel four Turkish citizens. BiH authorities have revoked residence permits for four Turkish citizens who are being persecuted by Recep Tayyip Erdogan’s regime on suspicion of cooperation with the Feto organisation, led by Turkey’s most prominent political rival, Fetullah Gulen. “We appealed against these decisions, but the Ministry of Security has rejected our appeals,” lawyer Nedim Ademović has said. (Željko Trkanjec, Euractiv.hr)