Greece ready to send ‘forces’ to Libya to monitor ceasefire 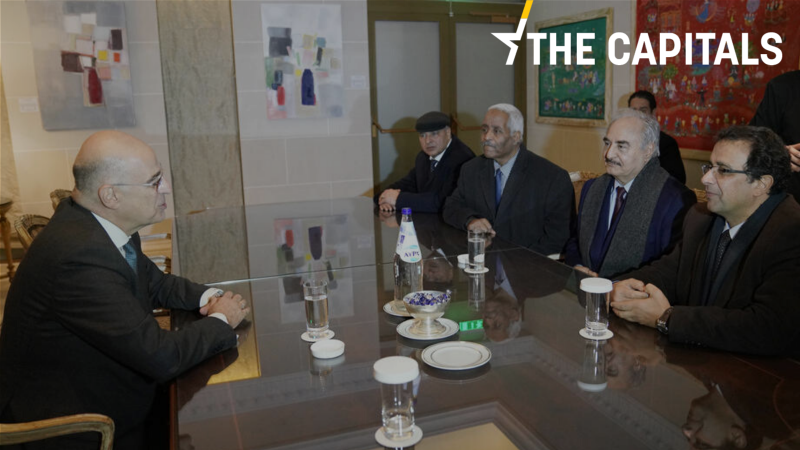 In the meantime, France reiterated yesterday its opposition to the MoU. Athens seems to heavily rely on Paris over the issue, considering that President Emmanuel Macron is the only EU leader that has publicly backed Greece both at NATO and EU level. [EPA/HARIS AKRIVIADIS / GREEK FOREIGN]

Updates with Haftar’s visit to Athens

LEAK: Before you start reading today’s edition of the Capitals, we invite you to read the story  by Samuel Stolton “LEAK: Commission considers facial recognition ban in AI ‘white paper’“.

ATHENS. Greek PM Kyriakos Mitsotakis has strongly criticised Germany’s decision not to invite Greece at a German-hosted summit on Sunday (19 January) on the Libyan crisis. He said that he had already spoken to German Chancellor Angela Merkel about it and would do so again today.

“We had a long conversation with General Haftar on all matters: The situation in Libya, the conference in Berlin and the next day in Libya and the wider area. We want a ceasefire, removal of mercenaries and cancellation of illegal memoranda,” Greek foreign minister Nikos Dendias said.

Dendias added that Greece was ready to help the next day in Libya “with forces” to help monitor the ceasefire and the arms embargo. “All of this is a contribution to the future of the Libyan people. We want it to be a modern democratic country”.

In other news, European Commission Vice President Margaritis Schinas said yesterday in Athens that the Dublin Regulation is dead. He added that one should speak of a new asylum system that may even be called Lesvos or Lampedusa Agreement. He estimated that the new system would be concluded by the end of the German Presidency in 2020. (Theodore Karaoulanis |EURACTIV.gr)

The debate sets the agenda. Gang violence and urban segregation, healthcare, nuclear energy and immigration. The issues for the coming political agenda in Sweden were laid on the table in the spring’s first party leader debate. Pekka Vanttinen has details.

VIENNA
New defence minister vows to make the army fully functional, again. In her first public statement since her inauguration on 7 January, the country’s new conservative defence minister, Klaudia Tanner (ÖVP), laid out her plan for the Austrian army.

A timeline for the ‘coal phase-out’. After reaching a compromise with the states and industry yesterday (16 January), the German government announced that it intends to close all of its coal-fired power plants by 2038 at the latest. Sarah Lawton reports from Berlin.

Nuclear weapons phase-out. Belgian MPs on Thursday voted against a resolution proposing to remove US nuclear weapons stationed in the country, and against joining the UN Treaty on the Prohibition of Nuclear Weapons by a small margin of 66 in favour (composed of Socialists, Greens, cdH, PVDA and DéFI) and 74 against (including N-VA, CD&V, Vlaams Belang and the Liberals).

What’s the story behind the debate? EURACTIV’s Alexandra Brzozowski has the full story.

AKK comes to UK’s defence. Support for a generous Brexit deal on defence policy has come from German defence minister, and potential heir to Angela Merkel, Annegret Kramp-Karrenbauer on Thursday (16 January). Speaking at the London School of Economics, AKK called on the EU to offer Britain “privileged third-party status” in defence and foreign policy cooperation after Brexit, including the Future Combat Air System, the Franco-German stealth jet programme. AKK also talked up the prospect of the UK being part of an EU3 (Germany, the UK and France) on defence policy. (Benjamin Fox | EURACTIV.com)

DUBLIN
Varadkar cancels Greek President meeting. Irish Taoiseach Leo Varadkar pulled out of a meeting in Dublin with Greek President Prokopis Pavlopoulos yesterday (16 January), as Minister of State Finian McGrath stepped in to represent the government. All senior ministers were unavailable due to campaigning commitments ahead of the February general election, reported The Irish Times.

Meanwhile, Irish President Michael D Higgins was able to meet Pavlopoulos and his wife, welcoming them to Áras an Uachtaráin with a military guard of honour and a 21-gun salute. (Samuel Stolton | EURACTIV.com)

EU Parliament launches process to waive immunity of Catalan MEPs. Following a request from the Spanish Supreme Court, the European Parliament has officially launched the process of lifting the immunities of separatist MEPs Carles Puigdemont and Toni Comin, who have both been charged in Spain due to their involvement in the illegal referendum for Catalonia’s independence.

But what are the chances that the Parliament will reject the Supreme Court’s request? EURACTIV’s Beatriz Rios reports.

Read more on the issue.

Lega’s electoral reform plans ruined. Italy’s Constitutional Court shot down Lega’s request of a referendum to change the country’s electoral system. The referendum would have asked Italians to abolish the proportional distribution of seats in the parliament. With a majority system, Lega would have the seats to almost rule alone, but the court called the referendum “excessively manipulative”. (Gerardo Fortuna | EURACTIV.com)

Time to find new allies. “When the time comes to decide whether Fidesz should stay in the EPP, today’s vote will be a serious reason to find new allies,” said Family Minister and Fidesz vice-president Katalin Novák after the European Parliament called on the EU to set out concrete demands and deadlines for Poland and Hungary over their worsening rule of law and judicial independence situation in a resolution adopted on Thursday (16 January). (Vlagyiszlav Makszimov | EURACTIV.com)

WARSAW
Venice Commission critical on judicial reforms. Following its visit to Poland, the Council of Europe’s Venice Commission issued a critical opinion regarding the government’s latest amendments to its controversial court reforms. Although the opinion is not legally binding, it advised the Polish parliament to reject the government’s proposed reforms as these would suppress the judges’ freedoms of speech and assembly.

BRATISLAVA
Former general prosecutor detained. The National Criminal Agency has arrested and charged former general prosecutor Dobroslav Trnka for abuse of power. During his 7-year tenure, Trnka was following instructions from Marián Kočener, who is currently standing trial in the Kuciak murder case. The court still has to decide whether to prosecute Trnka while in custody. (Zuzana Gabrižová | EURACTIV.sk)

ZAGREB
Businessman sues Prime Minister. Ivica Todoric, the former owner of Agrokor (today’s company Fortenova), who has been accused of multi-million dollar economic malpractice in the Agrokor affair, presented emails, in Tuesday’s news conference, proving that Agrokor had been targeted by the Borg group, led by the PM. Todoric said he will now be suing Prime Minister Andrej Plenković.

In other news, Zargeb’s air pollution levels exceed safety limits, it was announced on Wednesday. The next day, Environment Minister Tomislav Ćorić pointed out that only 30% of the electric energy used by Croatians comes from renewable sources, which is ”below the European average”. The city’s current mayor, Milan Bandić, has been accused of often ignoring the problem, particularly as he has received complaints about the city’s waste management problems and pollution. (Karla Junicic | EURACTIV.hr)

SOFIA
Moratorium on waste imports. The Bulgarian government is exploring the possibility of temporarily banning waste imports, including from EU countries. The Opposition in parliament has announced that such a ban would be contrary to EU law because waste is a commodity, but has called for a ban on waste imports from non-EU countries. The debate in the country began after significant quantities of illegally stored waste were discovered in Bulgaria and after Italy seized a shipment of waste which was on its way to Bulgaria. (Krassen Nikolov| EURACTIV.bg)

Romania to change electoral law. The government plans to take responsibility in parliament for a change of the legislation for local elections, to reintroduce the second round for mayoral elections. However, the government doesn’t have the necessary majority, and the opposition parties have announced they will call for a no confidence vote. (EURACTIV.ro)

BELGRADE
Record EBRD investment in Serbia. In 2019, the European Bank for Reconstruction and Development (EBRD) invested €516 million in Serbia, with most of the funds flowing into the private sector and the green economy. The EBRD signed more than 20 new projects and registered the highest investment in the country since Serbia joined the EBRD in 2001. (EURACTIV.rs)

Also, check out what the EBRD had to say about the Western Balkans in 2018.

SARAJEVO
‘I am Tito!’ BIH’s High Representative Valentin Inzko and Serb member of BIH’s presidency, Milorad Dodik, both attended a reception organised on the occasion of Orthodox Christmas even though they had not talked in months.  At the event, things got heated when Dodik asked Inzko why he was there, to which Inzko quickly replied “I am Tito!” in reference to former Yugoslav leader Josip Broz Tito. (Željko Trkanjec | EURACTIV.hr)